Not to be outdone, Tyson enters plant-based meat market

It will begin selling nuggets made from pea protein summer. A blended burger made from beef and pea protein will follow this fall

Not to be outdone, Tyson enters plant-based meat market 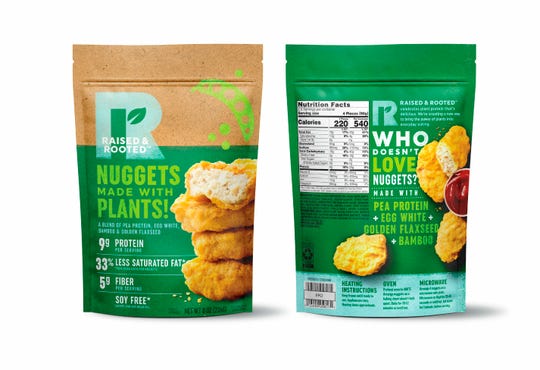 The fast-growing market for meat alternatives has a surprising new player: Tyson Foods.

Tyson, one of the world’s largest meat producers, will begin selling nuggets made from pea protein at grocery stores this summer. A blended burger made from beef and pea protein will follow this fall. Both will be sold under a new brand, Raised and Rooted, which will continue to develop plant-based and blended products for both groceries and restaurants.

Tyson is responding to a growing global trend toward plant-based eating, fueled by health and environmental concerns. U.S. sales of meat substitutes are expected to jump 78% to $2.5 billion between 2018 and 2023, according to Euromonitor. Global sales could reach $23 billion in that same timeframe.

Startups like Beyond Meat, which makes burgers and sausages from pea protein, and Impossible Foods, which has a soy-based formula, have also raised consumers’ interest with products that mimic meat so closely in taste and texture that they’re being sold at Burger King and Carl’s Jr.

But the entry of Springdale, Arkansas-based Tyson could upend the alternative protein market because of its sheer size and distribution capacity. Tyson Foods reported $40 billion in sales in its 2018 fiscal year; Beyond Meat, which held its IPO last month, forecasts $210 million in sales this year. Tyson has 50 facilities just for processing chicken; Impossible Foods has one factory in Silicon Valley.

Tyson has been watching the alternative protein market for a while. Its investment arm, Tyson Ventures, acquired a 5% stake in Beyond Meat in 2016. It sold that stake before Beyond Meat’s IPO, but it continues to hold investments in other startups, including Memphis Meats and Future Meat Technologies — which grow meat from cells — and mushroom-based protein startup MycoTechnology.