Brussels – While the U.S. Congress talks about reining in big tech companies, Europe is taking action.

The European Union said Wednesday it is investigating whether Amazon uses data from independent retailers to gain an unfair advantage, a decision that could lead to changes in how the internet’s biggest marketplace works. 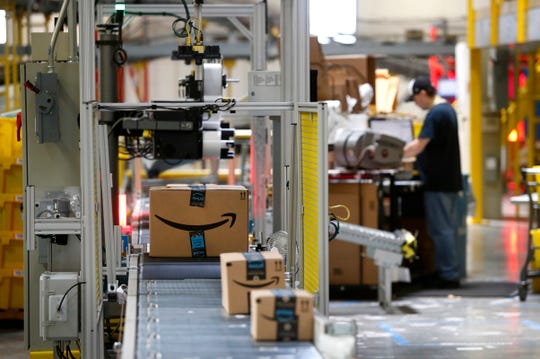 Packages pass through a scanner at an Amazon fulfillment center in Baltimore. (Photo: Patrick Semansky, AP)

The move echoes similar antitrust actions against Google and Microsoft that have led to billions in fines. It also contrasts with U.S. lawmakers’ slower approach to the issue, as they start discussing how to curb the growing power of the tech industry’s titans. A Tuesday hearing in Washington looked into whether the companies’ business practices run afoul of century-old laws originally designed to combat railroad and oil monopolies. Any U.S. action is still a long time away.

In addition to selling its own products, Amazon allows third-party retailers to sell their goods through its site. Last year, more than half of the items sold on Amazon worldwide were from third-party sellers.

In doing so, Amazon collects data about activity on its platform that, the EU says, it might be able to use to favor its own products for sale. In particular, the EU will look at how Amazon determines which trader is selected as the default seller of an item that a customer wants to buy.

The EU opened a preliminary probe into the issue last year, and Vestager said it has shown that “Amazon appears to use competitively sensitive information — about marketplace sellers, their products and transactions on the marketplace.”

The investigation could lead to fines and eventually cause Amazon to change the way it works. Previous EU antitrust cases have resulted in such change, though it is unclear how big their ultimate impact has been in addressing the EU’s concerns. For example, Google had to tweak the display of search results, which the EU had said favored Google goods and services.

Amazon said it “will cooperate fully with the European Commission and continue working hard to support businesses of all sizes and help them grow.”

During Tuesday’s hearing before a House panel, Amazon associate general counsel Nate Sutton said Amazon has an incentive to keep third-party sellers strong because they make up nearly 60% of unit sales for Amazon and are growing twice as fast as Amazon’s own retail operations.

Under questioning, Sutton insisted that Amazon uses data to serve customers but not to directly compete with them. His remarks echoed executive Jeff Wilke’s insistence in June that no one inside Amazon shares seller data to create competing Amazon private-label products, such as Solimo paper towels and Amazon Basics batteries.

In a parallel but separate case, Germany’s competition regulator said Wednesday that Amazon was changing some of its business conditions for traders on its online marketplace worldwide after the regulator raised concerns about some terms. The case is not like the EU’s probe about data on traders, but about contractual terms such as a one-sided exemption from liability to Amazon’s benefit as well as the place of jurisdiction for disputes.

Other EU countries like Austria, Luxembourg and Italy are also independently investigating Amazon but EU spokeswoman Lucia Caudet said the national probes did not overlap with the EU investigation.

The EU’s investigations into major companies like Amazon have led the way in a global push to more tightly regulate tech giants, as many governments wonder if they are becoming too big for the good of the wider economy.

Among the key questions are not only whether the tech giants abuse their market dominance to choke off competition, potentially stifling choice for consumers and innovation, but also whether they are adequately protecting users’ data and paying their fair share of taxes in countries where they operate.

U.S. authorities have started to follow Europe’s lead in taking a closer look at the big tech companies, particularly after the scandal in which Facebook was found to have allowed data on millions of people to be used by other companies, including to try to influence the 2016 election that made Donald Trump the new U.S. president. According to published reports, U.S. regulators are poised to fine Facebook $5 billion for that scandal, but the wider debate of reining in tech companies’ powers has only just begun.

The House Judiciary Committee in the U.S. is investigating the market power of Facebook, Google, Amazon and Apple. Congress also held two days of hearings this week on Facebook’s plan to create a digital currency, Libra, which governments in the U.S. and Europe have been skeptical about.

In Europe, one of the big questions is how to tax these companies, which do huge business across the continent but pay taxes only in the EU nation where their local headquarters are based, often a low-tax haven like Luxembourg or the Netherlands. The result is they pay a far lower tax rate than traditional businesses.

France has tried to address the problem by unilaterally proposing a 3% tax on big tech companies’ revenue in the country. The U.S. government is not happy about that and finance ministers from the Group of Seven wealthy countries are discussing the issue this week in Paris.

Ursula von der Leyen, the newly appointed EU Commission President who should take up her role in November, has said the issue will be a priority for her.

The tax issue has brought Amazon into the EU’s crosshairs before. Two years ago, officials ordered it to pay $295 million in back taxes to Luxembourg after finding that the company profited from a tax avoidance deal with the tiny European country.