Good & Gather will be Target’s largest in-house brand with more than 2,000 products to be rolled out over the next 18 months

Minneapolis — Target is making its biggest play in grocery in years with the launch of a flagship private-label food brand that will completely replace Target’s Archer Farms and Simply Balanced lines and will partially swap out Market Pantry.

Good & Gather will be Target’s largest in-house brand across the entire store, with more than 2,000 products to be rolled out over the next 18 months. It’s expected to become a multi-million dollar brand and is the latest example of the Minneapolis retailer leaning into developing and selling its own brands to offer more items consumers can’t find anywhere else. 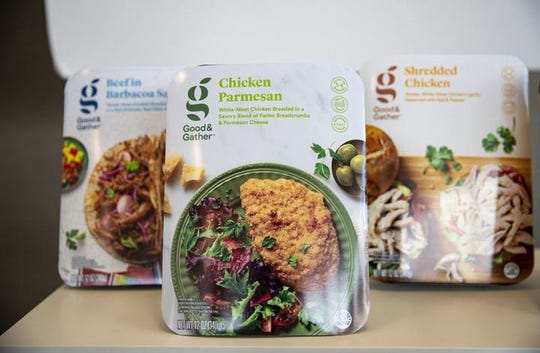 “We did a ton of guest research,” said Stephanie Lundquist, who stepped into a newly created role of president of food and beverage in January. “One of the things we heard is that they’re time starved, so they want ease and convenience. They don’t want to have to worry if there are ingredients or additives they don’t want. But above all else, they want great taste at an affordable price.”

With those guiding principles in mind, Target stepped up the rigor of its taste testing and hired more food experts and scientists to help develop the products. It also worked out of a new test kitchen at its Nicollet Mall headquarters.

The new line, which has been under development for a couple of years, will be free of artificial flavors and sweeteners, synthetic colors and high-fructose corn syrup. Some of the products will be similar to their Archer Farms and Simply Balanced counterparts with some upgrades. For example, the lime flavor in the Simply Balanced sparkling water was reformulated in the Good & Gather version.

Others products are completely new and are aimed at better addressing the changing tastes of today’s consumers with items such as avocado toast salad mix (with the mini-toasts serving as croutons) and beet hummus.

“We have some tried and true products within our owned brand portfolio that our guests absolutely love,” said Lundquist. “But we also saw an opportunity to make it a lot easier for them to shop our food and beverage area by having a flagship brand and that makes it a lot simpler to know what they’re getting.”

With Good & Gather, Target expects to increase its overall penetration of private-label sales in grocery, signaling that some national brands might get less shelf space in the process.

In the last couple years, Target has launched more than two dozen new private-label brands across apparel, home decor, electronics, and cleaning supplies to help revive its business. In some cases, the new brands have replaced old ones as was the case with A New Day and Wild Fable replacing Mossimo and Merona in women’s clothing. These in-house brands are generally more profitable for Target.

The new food brand is aimed at invigorating Target’s grocery business, which has been showing progress the last couple of years following investments to improve its offering in a highly-competitive grocery environment.

Target started expanding its grocery offerings about a decade ago, hoping that having more fresh meat and produce would help drive more trips to its big-box stores. But groceries became a weak spot for the retailer as leaders acknowledged it didn’t have a differentiated assortment.

In the last few years, Target has made several investments in this space. It has hired dedicated grocery teams in stores and in district field offices to focus on that side of the store. It has updated the in-store displays and lighting in the grocery department as Target remodels stores, a change that Target says has led to a sizable lift in sales. It’s increased its craft beer assortment and has introduced new exclusive brands of value-focused wine.

And in January, Target CEO Brian Cornell tapped Lundquist to the new grocery president position in order to bring together the grocery merchandising, supply chain, financial planning, and operations under one leader.

With the increased focus, Target has posted seven straight quarters of sales growth in food and beverage and has been gaining market share in the category. It’s one of the top 10 grocers in the U.S. with grocery accounting for about 20% of its $75-billion in annual sales.

The hope, she said, is that Good & Gather will not only drive more trips to Target but also more loyalty and inspiration.

While the number of Market Pantry items will be reduced, Target will continue to offer some items under that longtime private-label value brand since consumers said they wanted Target to keep some of it.

In the coming weeks, Target will begin putting some Archer Farms and Simply Balanced products on clearance. But those two Target brands will be phased out over time as Good & Gather is rolled out in the next year. The first batch of 650 Good & Gather products, including items in the dairy and produce aisles, will begin hitting stores in September. A thousand more items will arrive in the spring and another thousand will show up next fall.