The Commerce Department also said Friday that personal incomes rose just 0.1%, the smallest gain in 10 months. With spending ahead of incomes, the savings rate fell to 7.7%, the lowest since last November, but still a solid figure by historic standards. 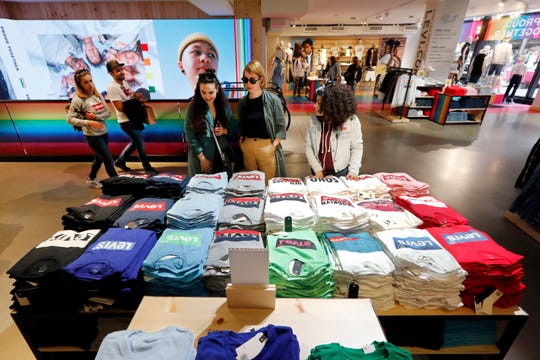 Shoppers in the Levi's store in New York's Times Square, survey a T-shirt display in June. Americans were in a buying mood in July. (Photo: Richard Drew, AP)

With trade war tensions discouraging business investment and cutting into exports, consumers are increasingly important to the U.S. economy. Household spending was the principal driver of growth in the April-June quarter, when it increased by the most in five years.

The anemic income increase follows a string of healthy gains this year that have helped fuel Americans’ ability to spend. In July, wages and salaries grew more slowly than in recent months and income from interest payments fell sharply. Wages and salaries paid by manufacturing firms also dropped.

The inflation figures fell short of the Federal Reserve’s 2% target, as they have nearly continuously since the Fed set its target in 2012. The Fed targets a modest amount of inflation as a cushion against deflation, a destabilizing drop in prices and incomes.

Consumers are keeping the economy afloat but growth has still slowed this year, to a 2% annual pace in the second quarter from 3.1% in the first three months of the year.