Bill giving protections to Uber drivers, others moves ahead

Bill giving protections to Uber drivers, others moves ahead

Sacramento, Calif. – California lawmakers sent the governor a bill Wednesday that would give new wage and benefit protections to workers at so-called gig economy companies such as Uber and Lyft where people pick up jobs on their own schedule.

The 56-15 Assembly vote marked a victory for labor unions and a defeat for tech companies that vehemently oppose the proposal.

It was previously approved by the state Senate and Democratic Gov. Gavin Newsom has said he supports it. 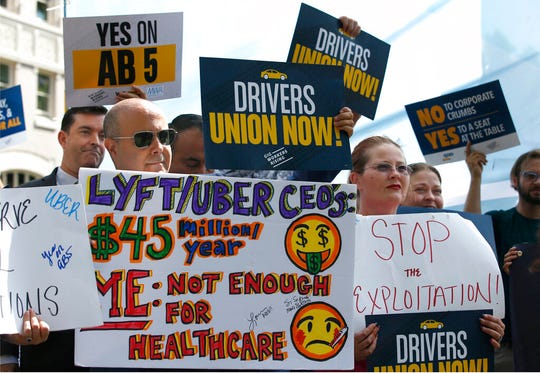 Dozens of supporters of a measure to limit when companies can label workers as independent contractors rally at the Capitol in Sacramento, Calif., Wednesday, Aug. 28, 2019. If approved by the legislature and signed by Gov. Gavin Newsom, AB5, by Assemblywoman Lorena Gonzalez, D-San Diego, would require companies like Uber and Lyft to treat their drivers like employees. (Photo: Rich Pedroncelli, AP)

The measure could have national implications as politicians and businesses confront the changing nature of work in the so-called gig economy.

“It’s forced the nation to take a look at what the future of work is going to look like,” Democratic Assemblyman Ian Calderon of Whittier said in supporting the bill.

In a rare injection of presidential politics into a state issue, most of the major Democratic presidential contenders urged California lawmakers to pass the bill and have championed similar proposals in their campaigns.

“This isn’t perfect, but I think this goes a long way to protecting workers, legitimate small businesses, legitimate businesses that play by the rules, and we as taxpayers that have to clean up the mess when these businesses don’t provide enough for their workers,” said the author of the bill, Democratic Assemblywoman Lorena Gonzalez, her voice shaking with emotion.

Uber, Lyft and meal delivery companies such as Doordash and Postmates still hope Newsom can negotiate a new proposal with unions that would create a separate set of rules for gig workers.

Newsom is committed to continuing talks on refinements, said his spokesman Nathan Click.

The bill was approved over strident Republican opposition.

By picking which industries can use independent contractors and which workers must be treated as employees, “we are playing a political Russian roulette with their lives, their livelihood and their labor,” said Republican Assemblyman Jim Patterson of Fresno.

The bill has drawn staunch opposition from on-demand delivery and ridesharing companies that say it will effectively kill their business model. They’ve argued that making their workers employees would limit their ability to work flexible hours.

Lyft predicted that riders could see higher costs and longer waits if the measure takes effect. It also reiterated an earlier pledge by several companies to spend $90 million on a California ballot measure “to preserve the freedom and access drivers and riders want and need,” spokesman Adrian Durbin said in a statement.

Uber’s chief legal officer, Tony West, contended that the bill does not automatically reclassify drivers to employees, and the company has properly classified its drivers as independent contractors. But he conceded there will be legal challenges involving the status of Uber drivers. 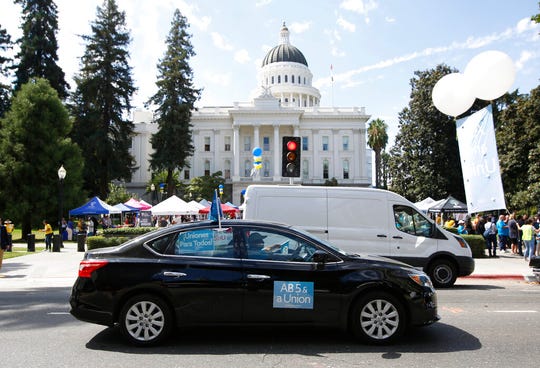 Dozens of supporters of a measure to limit when companies can label workers as independent contractors circle the Capitol during a rally in Sacramento, Calif., Wednesday, Aug. 28, 2019. (Photo: Rich Pedroncelli, AP)

Wedbush analyst Daniel Ives wrote in a note to investors that the firm expects gig economy companies to push back and find a middle ground.

The California measure could spread to other states, especially those with big cities such as New York and Illinois that already have strong regulations for taxicabs, said Michael Ramsey, an analyst for the Gartner research firm.

If that happens, Uber, Lyft and other app-based companies could become software platforms that contract with cab or other companies to provide mobility services, he said.

The bill would put into law a California Supreme Court decision making it harder for companies to classify workers as independent contractors and instead would make them classify the workers as employees.

“Today these so-called gig companies present themselves as the so-called innovative future of tomorrow,” Democratic Sen. Marie Elena Durazo of Los Angeles said Tuesday. “Let’s be clear. There is nothing innovative about underpaying someone for their labor.”

While its impact on gig economy companies has drawn most of the attention, the bill would affect a wide array of industries.

The law lays out a test to decide if workers can be labeled as contractors. The worker must be free from control of the company, perform work “outside the usual course of the hiring entity’s business,” and be engaged in an independently established trade, occupation or business of the same nature of the work they are performing.

John Kabateck, California director of the National Federation of Independent Business, called the bill’s passage “a sad day for good governance” because it carves out 37 occupations from the high court’s ruling instead of setting a uniform law.

Gonzalez said nothing in the law forces companies to eliminate worker flexibility. As employees, the workers would be entitled to minimum wage and benefits such as workers compensation, unemployment insurance and paid leave.

Sen. Mike Morrell of Rancho Cucamonga was among Republican opponents of the bill, many of whom told emotional stories of their own entrepreneurial success.

“This is just another assault on the free market, and again, it is a slouch toward socialism when government controls what business does,” Morrell said.

Associated Press writers Kathleen Ronayne in Sacramento and Tom Krisher in Detroit contributed to this story.