A growing burger chain has canceled plans to open in Dearborn following backlash based on the company's Israeli roots.

Dearborn — A growing burger chain has canceled plans to open a location in Dearborn following backlash from the city's Arab American community based on the company's Israeli roots.

Burgerim, which translates to "many burgers" in Hebrew, announced plans to open a location earlier this year on Greenfield Road and Warren Avenue. By summer, calls to boycott spread through social media based on the company's Israeli roots.

Burgerim general manager Rony Younes and founder Sam Zahr with a takeout from one of his other Burgerim restaurants in Oak Park, Michigan on September 13, 2019. (Photo: Daniel Mears, Detroit News)

The chain has locations in Livonia, Royal Oak and Troy, but it was the Dearborn location that disrupted plans for an opening,said company executives.

Franchisee Sam Zahr, a Lebanese-American from Dearborn, was approved to open locations in Michigan, starting with his hometown, he said.

"I've invested more than $170,000 in this location, and the online campaigns didn't stop," said Zahr, 43. "I had to think, what's going to happen at the grand opening? It got to a point where my kids were getting bullied at school. I decided not to move forward with it and cut the losses."

The burger chain was founded in Israel, opening its first location in Tel Aviv in 2011, before rights were sold to reopen in the United States as an American-based outfit in 2015, company executives said.  The controversy over the business cuts to the heart of the Palestinian-Israeli conflict.

Janae Gilliam, Burgerim executive vice president, said protests have been rooted in "a lot of misconception and understanding."

"The idea that this is an Israeli concept, that it's been based out of Israel and gives back to Israel, couldn't be further from the truth," she told The News. "We have zero relationship with Israel. Ownership came to the U.S. to start and launch the concept here. We're 100% U.S.-based and nothing is getting shipped or diverted back to Israel."

However, when Amer Zahr, a Palestinian-American comedian and law professor at the University of Detroit Mercy, learned of the Burgerim opening in Dearborn, he mobilized a BDS boycott of the chain, saying that Israel has stolen land from Palestinians during its occupation of the West Bank.

The boycott, divestment and sanction of Israel is not against its people, he says, but a boycott of Israeli businesses that are supporting the country's economy during one of the world’s longest ongoing conflicts.

"Its current CEO is Israeli," said Amer Zahr, who is unrelated to Sam Zahr. "Also, no evidence exists that this Israeli-founded, Israeli-run company or officials have ever publicly expressed either anti-Zionist sentiments or support for Palestinian equality and rights."

He said while the company technically has no formal, legal connection to the Israeli operations, "a change of address doesn't erase its ugly history."

Sam Zahr’s attorneys filed a cease-and-desist against the comedian for making "defamatory statements" whilepromoting a boycott of the food chain.

In the letter, Burgerim's attorneys informed the comedian that "the truth is that Burgerim is not involved with Israel or any Israeli company whatsoever."

"This could have happened anywhere, but this is the first time we've seen this type of backlash," Gilliam said. "Once (the protests) gained momentum and power, it came down to it that Sam wasn't going to open due to that."

The planned location for the eatery, which straddles the border of Dearborn and Detroit, was expected to offer a selection of halal burgers and about 20 jobs, Sam Zahr said.

"As an immigrant myself, I worked so hard to get what I'm doing and never thought this would happen," he said. "It's disappointing because we come to America to unite, not divide people. It's important to note not all of the community is against this." 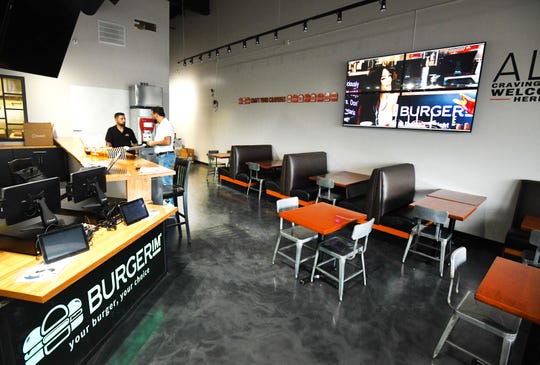 The fast-food chain has more than 160 locations worldwide with at least 30 more planned locations, including Bingham Farms, Redford, Sterling Heights and Oak Park.

"We would love to be in Dearborn, and we just hope people understand that Burgerim corporate, as a whole, is a very diverse company filled with all races, ethnicity, genders, and that's reflected into our menu," she said. "We're able to serve and feed everyone, that's our key."