New Art Van CEO: 'I can take it to another level'

New Art Van CEO: 'I can take it to another level'

The first time new Art Van Furniture CEO Gary Fazio met the company's founder Art Van Elslander 30 years ago, it wasn't the legendary salesman's outgoing personality or big smile that struck him. It was his silence.

Van Elslander, who founded the company 60 years ago this year, listened as Fazio, who worked in the mattress industry at the time, made his pitch. It was unusual for someone of Van Elslander's stature to be so attentive. 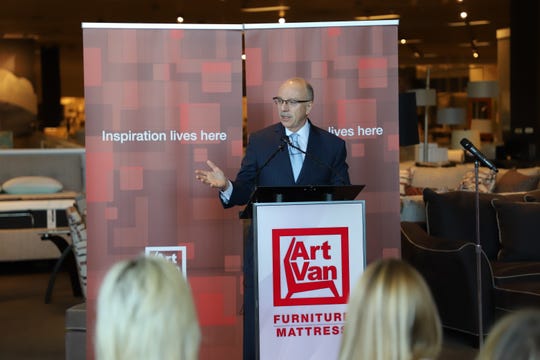 "There are so few leaders that will listen to a 'pitch,'" said Fazio, recalling that first meeting in 1989. "It struck me. A guy like that, being in the city for so long, and by then, having 30 years in the industry, it was 'wow.'  He was listening. Art was like that. You don't see that that often."

Now it's Fazio's job to not just listen but carry on Van Elslander's legacy after he was named the retailer's new chief executive earlier this month.

At a press conference Thursday, Fazio, making his first public comments since taking on his new role, said he decided to come out of retirement to lead the company because he was inspired by the retailer and working with Van Elslander's sons, Gary and David.

"I was inspired by working with them and I thought, you know what? I can take it to another level as well," said Fazio, 69. "This is what the opportunity is for me."

Fazio's introduction to the public Thursday came as the company unveiled a new marketing campaign, "Inspiration Lives Here," along with an initiative to recognize and reward unsung heroes in communities. Each Art Van store will give a $1,000 gift card to an unsung hero in their area this fall as the company celebrates its 60th anniversary.

Fazio succeeds former CEO Ron Boire, who left the retailer in August after leading the company for a little over a year.

Gary Van Elslander, who is now the chairman of the Art Van Furniture board of directors, said Fazio was recruited to lead the company because "we felt we needed to have someone who understood our culture."

Van Elslander said customers can expect a return to some of what they were used to before Boire's tenure, including furniture laid out by category in each store. He said Art Van will continue to offer home accents and rugs, though they've hired a new head of merchandising. And they want to use their sales force to "add value" to the shopping experience, he said.

Fazio joins Art Van, now the No. 1 furniture and mattress retailer in the Midwest with 190 stores in nine states, with more than 40 years of experience in the mattress and furniture industry on both the retail and manufacturing sides.

"He has an amazing track record," said Diane Charles, Art Van's vice president of corporate communications. "He understands the brand and knows the family. It just gives him a better understanding."

Fazio acknowledges how much furniture shopping has changed and how competitive it is with online retailers. He said he wants to make the experience easier and faster for Art Van's customers — and more educational.

"These are decisions that are tough," said Fazio, a Syracuse native. "There are a lot of choices here and we can help them navigate it a little bit better."

"Customers want to understand what they're buying," said Fazio. "...What's in that product? Why should I buy this mattress? Why this sofa?"

Fazio said also he wants to do a lot more with Art Van's products and make changes that he thinks will "inspire customers even more," including improved product lines. "You bring products to the consumer that she wants," he said.

As far as expanding Art Van into even more markets and other states, Fazio said he sees that continuing, though the retailer needs to really focus on the markets they're in now, which includes Chicago, Pittsburgh and Columbus.

"When you expand in the retail world, you've got to finish that market so you're able to maximize what your efforts are in that community," said Fazio. "...We've got work to do in all those markets to expand ourselves and make sure the offerings are what the customers want in those markets."

Charles sees Fazio leading the company into the next decade.