The Trump administration’s trade war is ravaging exports to China across the U.S. and well beyond the farm belt, new data from the U.S. Commerce Department show.

More than 30 states stretching from Florida to Alaska suffered double-digit drops in merchandise exports to China through September of this year. Sales to the Asian nation fell 39% in Texas, where oil and gas products comprise the largest export to that country. 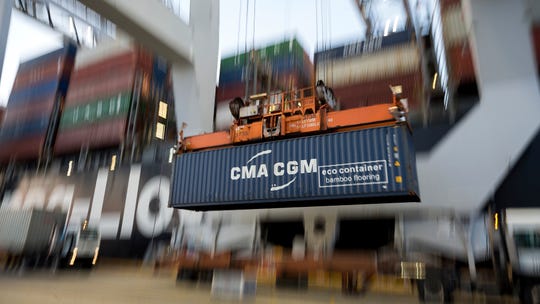 In this June, 19, 2018, file photo, a ship to shore crane lifts a CMA CGM Group shipping container onto the Hapag-Lloyd Teno at the Port of Savannah in Savannah, Ga. (Photo: Stephen B. Morton, AP)

In Alabama, which touts its status as the No. 3 auto-exporting state, total shipments to China plunged 49% in the first nine months. Product exports to China from the U.S. as a whole dropped 15% to $78.8 billion.

“Chinese demand for imports overall has been weak,” said Brad Setser, senior fellow for international economics at the Council on Foreign Relations. The recovery time for various U.S. products will depend on the nature of the trade deal, he said.

“In some cases, U.S. exports will never recover,” he added.

Washington state, home of Boeing’s industrial base, saw total Chinese merchandise exports fall 45% through the third quarter amid the grounding of the 737 Max, the company’s best-selling jet.

China has struck back in the trade war by imposing duties on about $135 billion of U.S. goods, targeting everything from farming products like soybeans and pork to motorcycles, cosmetics and wigs. Amid talks for a phase-one deal, Beijing has re-upped its demands for the removal of tariffs the U.S. has put on $360 billion of Chinese imports.

Meanwhile, a new report says China’s retaliatory tariffs on U.S. goods likely cost the GOP five House seats in the mid-term 2018 elections, a possible warning sign ahead of next year’s presidential vote. The study didn’t identify the candidates, but it pointed to agricultural tariffs as driving the losses.

The trade war, coupled with cuts to health care, “appear to have hurt Republican candidates where swing voters matter most,” said the analysis released this month by the National Bureau of Economic Research.