Ham, Thanksgiving’s second fiddle, will cost you this year

“Typically ham prices do go up through Christmas, but they don’t go this high,” Chicago-based buyer Anne Hurtado said.

Ham, Thanksgiving’s second fiddle, will cost you this year

Americans planning to splurge on a Thanksgiving or Christmas ham may have to dig deeper into their wallets.

Prices have skyrocketed to levels not seen since 2014, when a piglet-killing disease rocked the U.S. industry. This time, the culprit is African swine fever – the epidemic sweeping through hog herds in Asia. The disease created a formidable supply gap in China, where pork is the favorite protein. That’s coming at a time when the world is entering ham season. 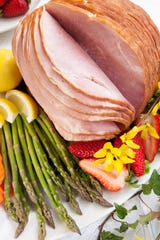 In the U.S., hams are often served alongside turkeys at Thanksgiving, celebrated on Nov. 28 this year. Around the globe, there are also upcoming celebrations that boost demand, such as Las Posadas in Mexico, Boxing Day in Canada and Lunar New Year in China, according to Urner Barry analysts Chloe Krimmel and Russell Barton. And of course, hams are often part of Christmas dinners in many nations, boosting American exports.

With little sign of the pig disease ebbing in China, American meat producers are shipping record numbers of whole hog carcasses to the Asian country. That’s two hams per hog gone from domestic supplies, said Anne Hurtado, a Chicago-based buyer at Amigos Meat & Poultry. China also just reopened its market to Canada, which is shipping hams overseas instead of sending them to processors in the U.S., she said.

“Typically ham prices do go up through Christmas, but they don’t go this high,” Hurtado said.

Wholesale ham has almost doubled this year to 91.53 cents a pound as of Friday, U.S government data show. Prices last week touched 96.49 cents, a five-year high. Even after the recent surge, costs could still keep climbing. The record set in 2014 was $1.4368, or about 57% higher than current levels.

Hurtado said Amigos increased frozen ham inventories before the spike in prices, so many retail customers may opt for frozen hams instead of fresh, because of the price difference. Still, unless stores decide to do promotions on hams to lure customers in for holiday shopping, consumers may see price increases passed onto them, she said.

While swine fever has been raging in Asia for a more than a year, the American market has been mostly isolated from the impact until recently. For example, most of this year’s gains in ham prices have come in just the past few weeks. That’s because the U.S. was working through a glut of meat at a time when export demand was hurt by the trade war between Beijing and Washington.

But as China’s protein-supply gap becomes more acute, the nation is snapping up American pork supplies despite tariff barriers. Tyson Foods Inc. and JBS SA, the world’s biggest meat supplier, have said they expect the impact of swine fever on meat prices to persist.

“It takes your breath away” seeing how prices have risen recently, said Bob Brown, an independent market consultant in Edmond, Oklahoma. “You think the markets adjust nice and easy, day-to-day? Nope. Bellies are famous for this. Hams are going to be famous, too.”