And returning clothes she buys online.

She’ll order the same item in several sizes, just in case, spending, briefly, as much as $600. Keeping what fits best, she sends the rest in for refunds in what retailers call bracketing.

“They make the returns process so easy,” said Webb, 31, an American Airlines flight service manager who lives in Brooklyn and does most such transacting with London-based Asos Plc. “It’s almost like, why not?”

Exactly. Now some in the industry that created the monster are trying to put it back in its cage. They’re taking baby steps not providing pre-paid mailing labels, requiring a receipt unless an unwanted item is carried to a store but also threatening to cut off serial returners, the most troublesome of the offenders. Among the others: people who wait months (or more) before returning and the so-called wardrobers, who wear articles of clothing and then ship them back. 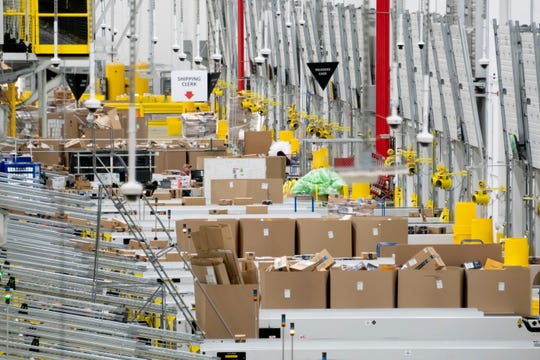 The transport from buyers to sellers is not only costly on its own but creates a need for room for storage. (Photo: David Guralnick, The Detroit News)

It has all become a bugbear for businesses selling stuff. Last year, $369 billion in merchandise, or 10% of total retail sales, was returned in the U.S., according to a study by research firm Appriss, up from $260 billion in 2015. And the holiday season, of course, is the one to dread in the returns departments: United Parcel Service Inc. expects to handle more than 1 million such packages every day, reaching a peak of 1.9 million on Jan. 2, which would be a 26% increase from the 2019 high point.

This is an expensive trend in a competitive sector where margins can be extremely thin. Older, established chains are in particular binds because they rely on e-commerce for most of their growth, it not all of it, and returns keep eating away at profits. Reverse logistics the transport from buyers to sellers is not only costly on its own but creates a need for lots of room for storage.

Return stock is “thrown into an empty space in a warehouse to pile up until someone can get to it,” said David Egan, head of industrial and logistics research for real estate advisory firm CBRE. Sometimes it ends up in landfills, another cost to the environment, along with the shrink-wrapping, padding and cardboard boxes, not to mention the carbon emissions from the trucks and planes that haul everything.

“We can improve the situation, but it’s not clear that we can fix it until we convince people not to over-buy,” Egan said. In the meantime, stores have to do the math to determine whether “the cost of the returns is outweighed by the lifetime value of the customer.”

To be sure, the calculus still tends to put shoppers in the winner’s box. Costco Wholesale Corp., for one, has no plan to pull back on its no-pain-for-you policy. “Are there people who abuse their returns privilege and bring back a sweater they bought ten years ago? Sure,” said Richard Galanti, the company’s chief financial officer. “But generally speaking, we trust our members and our members trust us.”

Among those willing to risk consumer wrath is Urban Outfitters Inc.’s Anthropologie, which charges a fee for mail returns. Fashion Nova, the most-searched fashion brand on Google last year, offers in-store credit, not refunds. Abercrombie & Fitch Co. will next year stop accepting returns without a receipt, invoice or order confirmation.

“There’s a lot of abuse going on, which is why some of these retailers are implementing stricter policies,” said Gabriella Santaniello, founder of the consulting firm A Line Partners.

In extreme cases, a consumer will be blacklisted. Asos, Webb’s favorite, announced in April that it might do so to those taking too much advantage of its famously lax policy. Amazon.com Inc. has banned some customers for life, according to the Wall Street Journal. Four of the top 10 retailers — Costco, Home Depot Inc., TJX Cos. and Target Corp. — said they track return patterns to spot repeat offenders.

What businesses would like people to do is bring things back in person. That helps with logistics. And there’s another benefit: According to the International Council of Shopping Centers, an item returned in a store results, on average, in an additional sale that is 107% of the value of what was brought back.

“If they come in the store to return we look at it as an opportunity,” said Scott Lipesky, Abercrombie’s chief financial officer.

There are twists on the strategy. Nordstrom Inc.’s Nordstrom Local “service hubs” will take something you purchased from rivals like Macy’s Inc. and Kohl’s Corp. and pack it up and mail it for you. Kohl’s accepts Amazon returns, offering a 25% discount on its goods to anyone who brings those in.

Webb, the over-buyer in Brooklyn, figures the no-fuss returns culture just may be too deeply ingrained by now. ‘

“People shop online knowing they can return stuff however they want and as much as they want,” she said. “Changing that mentality will be difficult.”