Small business owners see plenty of changes in 2020 including higher labor costs and, for many, new laws that aren’t on the books in their own states

New York – Small business owners have plenty of changes to deal with as 2020 begins – higher labor costs for many companies, and some owners will discover that they have to comply with new laws that aren’t on the books in their own states.

As of Jan. 1, there are higher minimum wages in a quarter of the states, including Michigan, and new federal overtime rules. The IRS has new W-4 forms owners will need to get used to. Plastic bags are on their way out at stores and other businesses in a growing number of places around the country. And California has new laws on freelancers and consumer privacy that can affect out-of-state companies. 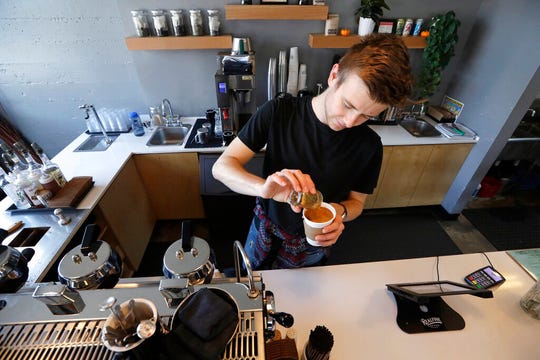 In this Nov. 4, 2019, file photo barista Porter Hahn makes an iced coffee drink for a customer in a coffee shop in Seattle. As of Jan. 1, 2020, there are higher minimum wages in a quarter of the states, and new federal overtime rules. (Photo: Elaine Thompson, AP, File)

A look at a handful of the 2020 changes in federal, state and local laws and regulations:

The minimum wage is higher in 13 states as of Jan. 1, including New York, where the minimum rose Dec. 31. The increases in California, Illinois, Maryland, Massachusetts, New Jersey and New York are steps toward an eventual $15 minimum approved by state legislatures. The minimum wage in Michigan increased from $9.45 per hour to $9.65 per hour on Jan. 1, 2020. 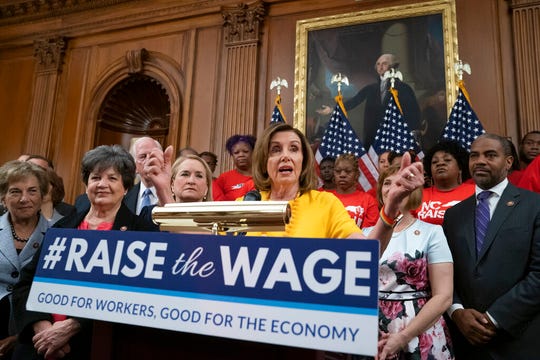 In this July 18, 2019, file photo speaker of the House Nancy Pelosi, D-Calif., joins fellow Democrats and activists seeking better pay as the House approved legislation to raise the federal minimum wage for the first time in a decade -- to $15 an hour, at the Capitol in Washington. As of Jan. 1, 2020, there are higher minimum wages in a quarter of the states, and new federal overtime rules. (Photo: J. Scott Applewhite, AP, File)

Increases are planned later in the year in states including Connecticut, New York, Oregon and Washington, D.C., and some counties and cities are raising their minimums as well.

While many businesses pay hourly workers above the minimum, when there’s an increase in the wage, many owners give all their staffers a raise to stay competitive amid a tight labor market.

The Labor Department’s long-awaited revamp of its overtime rules are now in effect, giving an estimated 1.3 million workers a raise. Workers earning under $684 per week or $35,568 must now be paid overtime, up from the previous threshold of $455 per week or $23,660 annually.

Retailers, restaurants and manufacturers are most likely to be affected, with shift supervisors and assistant managers among the positions that must now be paid overtime after 40 hours a week. While all employers are subject to the rules, the higher threshold is likely to have the greatest impact on small companies that lack the revenue cushion that larger businesses have against higher costs.

Employers are expected to limit the hours of some workers so they don’t incur overtime, or raise some staffers’ pay to a level above the threshold, making them exempt from the new rules.

More information about the overtime rules can be found on the Labor Department’s website.

The IRS has issued new W-4 forms for 2020, changing the way tax is withheld from employees’ pay. The new forms reflect changes required by the tax law that went into effect in late 2017; they do away with the allowances long used to calculate how much money should be withheld from paychecks. Instead, the new forms use information that can be found on employees’ tax returns.

Current employees don’t need to fill out new W-4 forms, but new staffers or employees who want to change their withholding do need to complete them. The IRS has created a calculator to help small businesses compute withholding for the new forms if they don’t use automated payroll software or providers. It can be found on the IRS website. Search for “new Form W-4.”

A growing number of states, counties and cities have passed legislation prohibiting or restricting retailers and other businesses from giving customers single-use plastic bags to carry purchases. Oregon’s ban went into effect Jan. 1, and Maine, New York state and Vermont have similar prohibitions going into effect later in the year.

There are variations among the laws and some exceptions – in New York, for example, pharmacies are exempt if the purchase is for a prescription drug, and restaurants can give diners bags for takeout food. Some of the laws also require a 5 cent charge if a customer wants a paper bag.

While the laws have been passed out of environmental concerns, small retailers might see a benefit from not having to buy and supply plastic bags. And those that sell reusable shopping tote bags could get a small revenue uptick.

A new California law gives consumers more control over the personal information companies collect and share with other businesses. While the law aims to exempt very small companies, those that do business with California residents, including out-of-state firms, can find themselves required to comply.

Under the law, companies must be able to tell consumers what information they have and what they do with it. Consumers must have the option to have their information deleted from companies’ computer systems. Businesses that handle information collected by others – for example, payment processors – can also find themselves subject to the law.

Companies are subject to the law if they have worldwide revenue above $25 million, collect or receive the personal information of 50,000 or more California consumers, households or electronic devices; or those who get at least half their revenue from selling personal information. Small businesses can reach the 50,000 threshold for collecting or receiving information – an individual who has a phone, tablet, PC at home and one at work counts as four users, not one.

A separate law puts strict limits on who can work as an independent contractor or freelancer. The law is aimed at ensuring that workers in the gig economy like Uber and Lyft drivers get the protections that labor laws give employees. It will force business owners to decide whether to hire these workers as employees, even for temporary assignments, or look for help in other states.

The law also affects out-of-state companies if they have been using independent contractors or freelancers in California.

Changes in California laws are also noteworthy because the state can be a trailblazer when it comes to employee, consumer and environmental issues. The nation’s first laws requiring paid sick leave for workers and banning plastic bags were enacted in California.