The total revenue from Detroit's three casinos in 2019 set a new record even before sports-betting becomes legal this year in Michigan.

The casinos reported adjusted gross revenue of $1.45 billion last year, up less than 1% from the previous record of $1.444 billion set in 2018, the Michigan Gaming Control Board said Tuesday. That slowed from the 1.4% increase reported from 2017 to 2018, but the casinos hope to attract more visitors when the state releases the rules for sports-betting later this year. 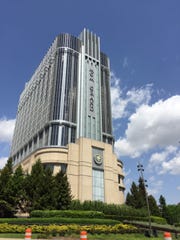 Detroit's two largest casinos, MGM Grand Detroit and MotorCity Casino, had their highest yearly adjusted revenue totals since they opened their doors in 1999, surpassing records in 2018.

MotorCity brought in $493.6 million in 2019, up from $489.7 million the year prior. The establishment is owned by Marian Ilitch, who began Little Caesar Enterprise Inc. with her late husband, Mike Ilitch.

Sports-betting and online gaming could open new avenues of revenue for the casinos after Gov. Gretchen Whitmer in December signed bills legalizing the activities. The Michigan Gaming Control Board is in the process of developing the rules for regulating them, said Mary Kay Bean, the board's spokeswoman. The board hopes to be able to review applications for licenses from casinos and their suppliers to offer on-site sports-betting this spring, though rulemaking for online gaming, including online sports-betting and fantasy sports contests is expected to take a full year.

The casinos have been preparing to offer sports-betting and online gaming even prior to legalization. MGM last fall opened its Moneyline sports lounge that could support a sportsbook. And Penn National last summer said it has 20-year agreements with online gaming operator The Stars Group and mobile sportsbook theScore Inc. to offer the activities at Greektown in addition to its own sportsbook.

The Michigan Treasury Department estimates the new laws will bring $19 million annually in new revenue to the state. In 2019, the Detroit casinos contributed $117.8 million in gaming taxes to the state of Michigan for 2019, up slightly from $117 million the year prior. They also put forth $184.2 million in wagering taxes and development agreement payments to the city of Detroit, up from $182.9 million in 2018.

Across the Detroit River, the city of Windsor received nearly $2.4 million in gaming revenue from Caesars Windsor for the third quarter of 2019, according to the Ontario Lottery and Gaming Corp., which did not share the casino's revenues. Contributions to the city now total $8.6 million for 2019 so far. Caesars Windsor already offers sports betting, though not on single-game bets.