This year, alarms were sounded by powerful people

It took five decades for global elites to put climate change at the center of the World Economic Forum, the annual gathering in Davos, Switzerland, that’s meant to shape the future and solve planet-sized problems.

This year, with rising temperatures and cutting emissions finally dominating the agenda, it seemed almost no one could stop talking about it. 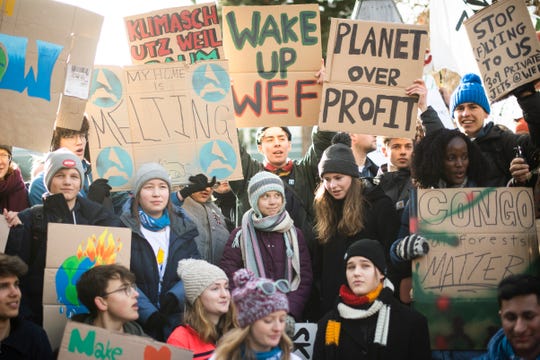 “Something which was largely on the periphery of finance has come into the mainstream,” Mark Carney, a Davos regular and the governor of the Bank of England, said at the Bloomberg Climate Forum. “These issues have moved very swiftly from being corporate social responsibility issues or more niche issues within finance to fundamental value drivers.”

The usual contradictions between green talk and the world’s rich and influential descending onto the Swiss ski resort in private jets and limousines were made more stark by this climate focus. Yet the calls for action didn’t come primarily from young activists like Greta Thunberg, who returned for her second consecutive year of speeches and planned a climate strike on Friday to mark the end of the event.

“The climate and the environment are a hot topic,” Thunberg said. “But if you see it from another perspective, pretty much nothing has been done, since global CO2 emissions have not been reduced.”

For the first time, environmental issues made up the entire top-five risks ranked by WEF’s members. Even the names given to meeting sessions in the program had changed. Two years ago, attendees could listen to a discussion titled “The New Energy Era.” This year, there was “The Future of Fossil Fuels.”

How to address climate questions took the center of debates, with alarms sounded by powerful people.

“Climate change is becoming an investment risk,” agreed Blackrock Chief Executive Officer Larry Fink in remarks this week. “This is becoming a dominant theme with more of our investors.”

Fink fired the starting gun last week, shortly before heading to Davos and wearing a global warming-themed scarf, by sending a letter to investors in the roughly $7 trillion asset-management firm declaring that arrival of a “fundamental reshaping of finance.” Now BlackRock plans to adopt climate considerations in its strategy and press for more companies to embrace environmental benchmarks.

But the lack of global standards on what makes businesses environmentally responsible remains a palpable concern. Even BlackRock is likely to remain invested in coal, and a common complaint among executives at Davos was that they can’t be the ones setting the standards.

“I say to our clients, I don’t want to be the sharp end of the spear,’” enforcing industry standards, said Michael Corbat,chief executive officer at Citigroup Inc. “You should set those, you get proper buy-in, and we will be here to support you.”

Standards are hard to find. The international community failed to agree on rules to set up a global carbon market at COP25, the annual United Nations climate conference held in December. That left governments, financial institutions and companies scrambling to figure out how much emissions are worth and how much to voluntarily pay for offsetting their toll on the climate.

With no rules for a global carbon market, the European Union is determined to protect its own. The region is targeting carbon neutrality by 2050, and is considering taxes on imports linked to high carbon dioxide emissions as part of a strategy to force trade partners to become greener.

“There is no point in only reducing greenhouse-gas emissions at home if we increase imports of CO2 from abroad,” European Commission President Ursula von der Leyen told a Davos audience.

U.S. Treasury Secretary Steven Mnuchin told a closing panel that a carbon tax would be a “tax on hard working people”as he bet on technological advances to help tackle environmental challenges.

Davos attendees, including the U.K.’s Prince Charles, voiced support for a carbon tax. German Chancellor Angela Merkel said reducing emissions could be a “matter of survival” for Europe. But a carbon tax could also test Europe’s ties with China just as the leadership in Beijing faces pressure to set ambitious climate targets in its next five-year plan. At the same time, there was talk at Davos about how China’s fractious relationship with the U.S. would challenge any effort to rein in emissions.

Davos found space for conflicting views. Outside the forum, a costumed protester dressed as a plutocrat with a cigar and a money-filled briefcase posed for photos a few feet from a man saying earnestly, “What we need is to promote a circular economy.” Someone etched the slogan “Act on Climate” into the snow near the helicopter landing zone used by U.S. President Donald Trump. His speech here included swipes at environmental alarmists.

“We are clean and beautiful and everything’s good,” he told an audience that included Thunberg and other young climate activists. “We must reject the perennial prophets of doom and their predictions of the apocalypse.”

Ian Bremmer, president of consulting firm Eurasia Group, noticed reaction to Trump’s policies isn’t uniformly negative at Davos. “You can have Greta here, you can have a bunch of people talking about climate and sustainability,” he told Bloomberg TV, “but the reality is that Trump doesn’t drive people crazy at Davos the way he does in the United States.”

Thunberg saw little sign of progress beyond talk. At a press conference on Friday, she declared the forum a failure on addressing the case for climate action.