Nike’s newest running sneakers: one is banned, one isn’t

Air Zoom line includes a high-end running shoe, which will be allowed in competition. A more affordable running sneaker won’t.

Nike’s newest running sneakers: one is banned, one isn’t

Nike Inc. is expanding its controversial running innovation — the technology that prompted track’s international governing body to rewrite its rules on sneakers — to new sports and new products.

The company unveiled Wednesday a footwear series featuring its new foam, carbon-fiber plates and small pockets of air underneath the forefoot. The Air Zoom line includes a high-end running shoe, which the company said will be allowed in competition under the new World Athletics guidelines, and a more affordable running sneaker, which won’t.

The sneakers show that the Beaverton, Oregon-based company is willing to separate the guidelines for Olympians from the products that it pitches toward amateur runners. Weekend warriors can run in whatever shoes they’d like, and at a cheaper price than previous iterations the $200 trainer may make the technology accessible to a wider set of consumers. 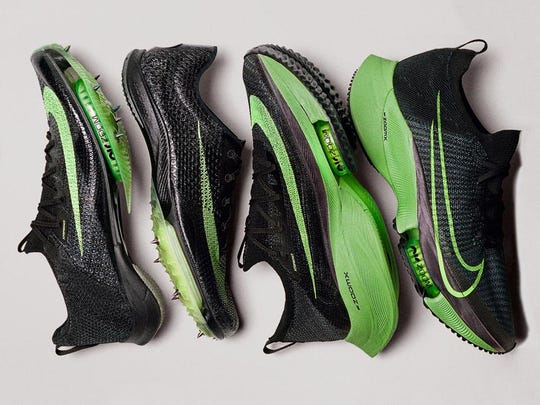 Nike unveiled Wednesday a footwear series featuring its new foam, carbon-fiber plates and small pockets of air underneath the forefoot.

“You want to protect those athletes more — you want to give them more foam, cushioning under the forefoot,” said Tony Bignell, Nike’s vice president of footwear innovation. “We will launch that shoe, because it’s a great shoe.”

The higher-end running shoe is the final version of the prototype that elite marathoner Eliud Kipchoge wore in October, when he ran 26.2 miles on a closed course in less than two hours. Its release comes less than a week after World Athletics clarified its guidelines on sneakers, saying they couldn’t have more than one carbon-fiber plate, and couldn’t have soles more than 40 millimeters (1.575 inches) thick.

Under those regulations, which involve measuring at a specific place on a men’s size-8 1 / 2 shoe, this new top-end shoe measures 39.5 millimeters. The more durable trainer has a stock height of more than 40 millimeters.

That rule change followed controversy over an earlier version of the same shoes, which Nike first released in 2017. Nike estimated those shoes would increase efficiency — and therefore speed — by at least 4%, leading many to question whether they were unfair. World Athletics’s new rules didn’t eliminate any of Nike’s previous versions.

“In the game of innovation, there are always unknowns and things to adjust to,” Nike Chief Design Officer John Hoke said a few days before the World Athletics announcement. “I’m not convinced this technology is the end-all-be-all of anything. I’m convinced this is a progressive step forward, and I’m also convinced in my team’s ability to keep pushing.”

To keep pushing, Nike is moving the technology into a number of other shoes and sports. The company’s newest basketball shoes have a plate, more foam and those air pods. Its newest soccer cleats are similar, as are Nike’s two newest track spikes, which also satisfy the new World Athletics guidelines for use in the Tokyo Games.

“The cascading of those innovations will find their way into more parts of our lines,” Hoke said.

The monthslong World Athletics investigation was top-of-mind during the creation of some of these other shoes as well. When Nike reps showed sprinter Sha’Carri Richardson a prototype of one of the track spikes, she said her first question was whether the shoe would be banned in the future.

“I was like, Oh, my gosh, it feels too good to be true,’” Richardson said in an interview. “They said they wouldn’t have us practicing in it and trying it out if it wasn’t going to be allowed.”