Home-sewn clothes are making a comeback. But is it too late for dying fabric stores?

Home-sewn clothes are making a comeback. But is it too late for dying fabric stores?

Fabric stores that sell threads, buttons and materials for making clothes are dwindling, with owners shuttering their shops citing waning interest from customers.

The disappearance of fabric stores is probably not a shock to outsiders — in the age of fast fashion, who still makes their own clothes? But sewing garments at home is — surprisingly — not dead. 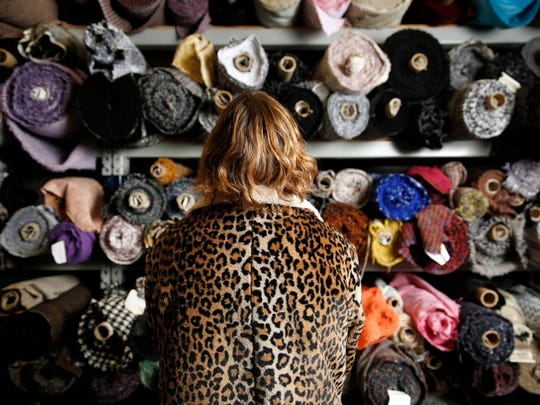 Soline Gauthier chooses fabrics to use for a school project last month at Mood Fabrics in Los Angeles. In the past 10 years, sewing clothing is experiencing a surge of popularity. (Photo: Dania Maxwell / TNS)

While fabric stores of yesteryear are falling off the map, a new industry is rising up to meet the modern demands of young “sewists” — a relatively new term that describes anyone who sews. And these businesses look quite different than your grandma’s fabric shop.

Sewing clothes was once considered a basic, practical skill, but it began to fall out of fashion with the baby boomer generation.

Mothers were working and had less time for such tasks, and the price of clothing was plummeting. By the time boomers had their own children, their memories of such skills were faint and increasingly unnecessary.

With home economics disappearing from classrooms, millennial-aged Americans (and younger) never learned the skill at all.

But in the past 10 years, sewing clothing is experiencing a surge of popularity among these generations. The sudden interest is spurred, in part, by recent and widespread criticism of fast fashion.

“There’s a huge interest in slow fashion,” said Sarai Mitnick, owner of Collete Patterns and Seamwork Magazine in Portland. “People are asking more questions about where their clothes come from.”

These new sewists are coalescing on social media, learning new skills through videos, taking part in online sewing challenges on Instagram, and creating podcasts to share tips with one another.

“We believe the increase in social media and online learning has massively accelerated the renewed interest in sewing,” wrote Helen Wilkinson and Caroline Somos, hosts of popular sewing podcast Love to Sew, in an email to the Union-Tribune.

The podcasters were shocked by their own quick success. Since the Love to Sew podcast launched in August 2017, the show has accumulated over 2.7 million downloads, with a current rate of 30,000 downloads per week.

“We had no idea the podcast would be such a big hit with the community,” the hosts wrote. “It immediately took off and is now the No. 1 garment sewing podcast out there.

The spike in the public’s interest in sewing is reflected in Google’s search trends, where the phrase “sewing classes near me” has steadily climbed over the past five years.

The online community has stirred a steady stream of millennial-friendly sewing businesses, who are joining the $36 billion craft and hobby industry.

Sewing patterns, the paper blueprints home sewers use to create clothing, have undergone dramatic changes in the past decade. Once dominated by brands birthed in the 1800s such as Vogue and McCalls, the sewing pattern business has ballooned to include countless online-only startups, such as Friday Pattern Company and Grainline Studio.

These newcomers are often led by young women who are drafting modern, easy-to-understand patterns that can be downloaded and printed at home.

Mitnick, a former Google and YouTube staffer in Silicon Valley, founded her pattern startup Collete Media nine years ago. The company was unique at the time for offering inclusive sizing, downloadable patterns and modern technology to reach customers.

“A lot of people were interested in sewing, but not a lot of companies were serving them 10 years ago,” Mitnick said. “Since then, tons of other small businesses have popped up and gained quite a following.”

Closet Case Patterns is one such example. The Montreal-based startup has capitalized on the generations who were never taught to sew at home. The company churns out beautifully produced videos with professional instructors who teach viewers how to make garments step by step.

These new startups saw what the industry’s relics didn’t: younger generations needed different tools than their grandparents did. More help, less tissue paper, and a community to share their progress with.

Creative craftsmanship isn’t necessarily why older generations would sew their clothes at home.

Before the days of fast fashion and cheap, synthetic materials, it was expensive to buy clothes. It wasn’t that long ago when sewing was the most economical choice, and price was the priority of home sewers.

“My mother-in-law had nine children, and she would sew all their clothes because it was the most cost-effective way to do it,” said Mardel Backes, a retired middle-school teacher in Poway, California.

Backes forked over $100 for the quality fabrics she used to create her camel hair coat. Granted, it was probably less than she’d spend on a new designer coat, but it also wasn’t a thrifty project.

Stores like Yardage Town, Joann, or Walmart — with their discount fabrics and affordable synthetics — are behind. They aren’t targeting a generation that values craft and quality.

Like all retail these days, fabric stores likely can’t survive without an online presence. Giants like Amazon-owned Fabric.com dominate the Internet scene, but independent sellers are getting into the game, too.