There are about 330 million people in the United States. Of those, 607 are billionaires. Of those, only five are black.

Becoming a billionaire is obviously not easy, but it’s more difficult for minorities.

The racial divide can be seen worldwide. In 2019, only 13 of the world’s 2,153 billionaires were black. Here’s a look at the United States’ five black billionaires.

Welcome to the club, Shawn Carter — aka Jay-Z. On the Run II, Jay-Z’s stadium tour with wife Beyonce, grossed roughly $5 million per night, pulling in more than $250 million. He became hip-hop’s first billionaire thanks to an empire that includes liquor, art, real estate and stakes in companies like Uber.

NBA great Jordan, whose playing salary totaled $90 million but he has earned another $1.4 billion (pretax) from corporate partners. Jordan still has sponsorship deals with Hanes, Gatorade and Upper Deck 15 years after retiring from basketball. 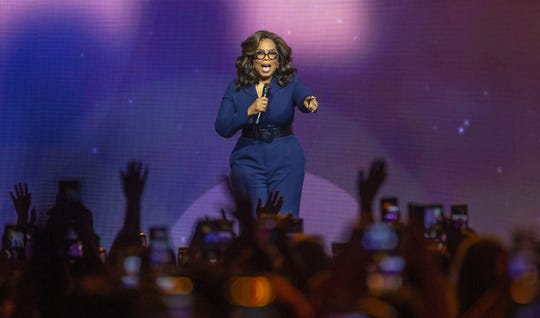 Oprah Winfrey points to the crowd as she talks during her tour stop at the Spectrum Center in Charlotte, N.C., on January 18, 2020. (Photo: Joshua Komer, TNS)

In addition to the media, entertainment and business empire she’s built, Winfrey owns shares in Weight Watchers and has a partnership with Apple. She has donated nearly half a billion dollars to charities throughout her career, including more than $100 million to the Oprah Winfrey Leadership Academy for Girls in South Africa.

Steward is co-founder and chairman of World Wide Technology, an $11.2 billion (sales) IT provider whose customers include Citi, Verizon and the federal government. In the early days, Steward sometimes went without a paycheck and once watched his car get repossessed from the office parking lot.

Smith made his fortune through the private equity firm, Vista Equity Partners, he founded in 2000. A graduate of Cornell, he pledged $50 million (personally and through a foundation) to the university in 2016.