Marathon Oil stocks fell by nearly half, while GM shares were off almost 14% and Ford's share price fell below $6, the lowest in decade

Correction: Marathon Petroleum Corp. owns the Marathon refinery in Detroit, and its stock price dropped 13.6% on Monday. The owner of the refinery was incorrect in a previous version of the story.

Detroit — On a day when the Dow Jones Industrial Average plunged 2,014 points — a 7.8% decline, the steepest drop since the financial crisis of 2008 — some Michigan stocks took an even harder beating.

As mounting fears over the coronavirus combined with a crash in oil prices sent a shudder through world markets on Monday, the share price of Marathon Petroleum Corp., which has a major refinery in Detroit, declined 13.6%. 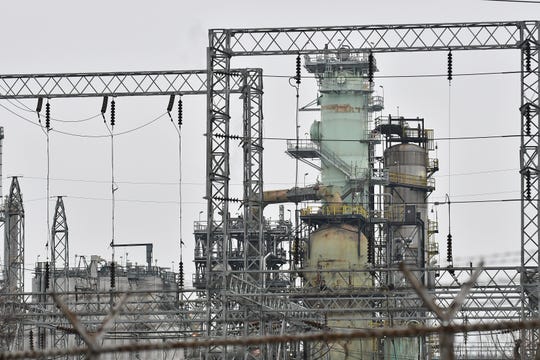 Michigan stocks on average were down 8.5%, according to a Detroit News analysis.

"The OPEC oil fallout over the weekend has cast a shadow on the U.S. and global economy," David Kudla, CEO of Grand Blanc-based Mainstay Capital Management LLC, said in a statement to The Detroit News. "Automakers tend to be susceptible to larger selloffs during times of heightened market uncertainty."

The staggering losses immediately raised fears that a recession might be on the way in the U.S. and the record-breaking 11-year bull market in the U.S. might be coming to an end.

"In a deeper market selloff, Wall Street has been especially wary of global consumer cyclical stocks," which is how GM is viewed, said David Sowerby, managing director and a portfolio manager at Ancora, a financial adviser in Bloomfield Hills.

"Even though GM as an individual company has accomplished much for shareholders in the way of cash-flow generation and capital allocation, they cannot entirely remove the view of Wall Street that autos get hurt when recession fears escalate," he said.

Midland-based Dow Inc.'s stock was negative nearly 22%. Shares of Detroit's TCF Financial Corp. were down 17.9%. Kellogg Co.'s were in the red by 1%. Domino's Pizza Inc. had bucked the trend, however, with shares up 0.16%.