Following are developments Thursday related to the global economy, the work place and the spread of the virus

There is no place on earth inhabited by humans that is not being hit by the economic shock of the pandemic. The U.S. rolled out a $2.3 trillion plan to stabilize the economy Thursday.

– Oxfam is warning half a billion people in the developing world could be pushed into poverty. In a report based on research at King’s College London and the Australian National University, Oxfam is calling for the immediate cancellation of $1 trillion in debt payments due from developing countries this year. 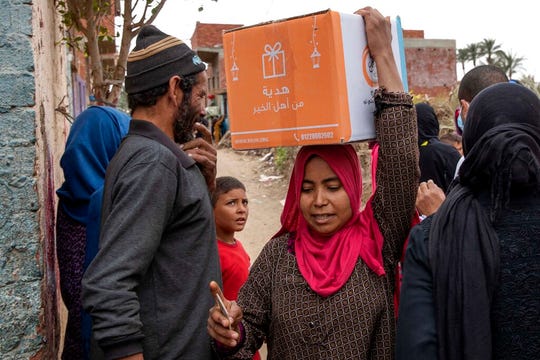 A woman carries a carton filled with food distributed by the non-governmental organization Resala Nour Ala Nour to people who have been highly affected by the coronavirus outbreak, in Cairo, Egypt, Thursday, April 9, 2020. (Photo: Nariman El-Mofty, AP)

– Sub-Saharan Africa is expected to fall into a recession for the first time in a quarter-century, according to the World Bank. A new report from the bank projects growth across the nearly 50-country region to fall this year from 2.4%, to at best minus 2.1% , and potentially negative 5%.

– Canada lost more than a million jobs last month. The unemployment rate is now 7.8%. The 2.2% jump in unemployment is the largest single-month change in more than four decades.

Thin Air: There has never been a more severe disruption to travel, particularly travel by air. The devastation in the travel industry has continued to ripple outward daily. 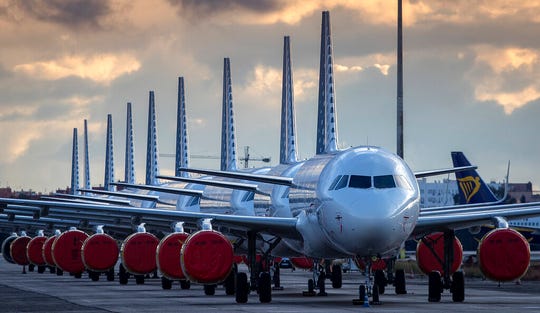 In this Saturday, March 21, 2020 file photo, Vueling Airlines planes sit parked in a line at the Seville, Spain airport, idled due to the coronavirus outbreak. (Photo: Miguel Morenatti, AP)

– Pilots and flight attendants are demanding more personal protective equipment as hundreds test positive for the virus. So far, 41 pilots at American Airlines and nearly 200 pilots at other U.S. carriers have tested positive, according their unions. About 250 flight attendants have tested positive, according to The Association of Flight Attendants said, and hundreds more are isolated after possible exposure.

– Portugal halted commercial flights at all five of its five international airports. New restrictions were activated Thursday that would prevent travel or more than five people gathering in one place, essentially a prohibition on travel with other people.

– The number of passengers carried by French-Dutch airline group Air France-KLM plunged by 57% in March compared with the same month a year ago. The group anticipates the suspension of more than 90% of its planned capacity in April and May due to travel restrictions, it said Thursday.

Supply Demanded: The need for protective equipment and other medical gear has prompted a broad response from companies to produce it.

– More than 100 companies have submitted legitimate responses to the German government’s calls for protective medical equipment, the country’s health minister said. Germany wants to reduce its dependence on Asian manufacturers because surging demand has made supply scarce. The government plans to award contracts for companies to supply it with protective equipment from mid-August at the latest through the end of 2021.

Tech Malfunction: No sector in the S&P has been unscathed by the outbreak, and that includes technology. Every company, from startups to the biggest tech firms in the world, are suffering.

– U.S. sales of iPhones dropped 56% in March compared with a year earlier, according to a report from KeyBanc Capital Markets. The firm used data from 2 million KeyBanc credit and debit cards to reach that conclusion. Online sales have not been able to make up for the loss of sales from Apple stores, closed for the outbreak. KeyBank also found that people who are buying iPhones are leaning toward cheaper models now, with the economic outlook dark.

– A venture capital firm says it has raised $2 billion in new funds to invest in startups it believes will be key to a global economic recovery. Index Ventures, with headquarters in London and San Francisco, is betting that there will be lucrative opportunities to emerge from the crisis.

Markets: It has been the best week on Wall Street in 11 years, with the S&P 500, the Dow and Nasdaq each notching a 10-point gain so far.

– Stocks rose Thursday after the Federal Reserve launched its latest unprecedented effort to support the economy through the coronavirus outbreak.

Pandemic And Chill: Isolation during the outbreak has created a number of shared experiences, in addition to scrambling for toilet paper and consuming more mac & cheese. Endless hours streaming TV shows and movies is one more.

– After launching just five months ago, Disney says it’s surpassed 50 million paid subscribers worldwide. The entertainment juggernaut has expanded aggressively during the outbreak, launching streaming services in Italy, the U.K. and Germany over the past two weeks.

– Since it began monitoring COVID-19 related growth three weeks ago, analysts with Citi say Netflix, Hulu and Disney have all registered double-digit traffic increases. That growth comes from new members and increased usage by existing users stuck inside.