A rough ride for carriers Delta, United and American promises to get worse this fall

By one analyst’s count, as many as 105,000 jobs could be lost industrywide.

A rough ride for carriers Delta, United and American promises to get worse this fall

U.S. airlines face a bleak future of depressed traffic and volatile revenue well into 2021, as the global economy transitions from the acute damage of a public health catastrophe into a potentially long recession. 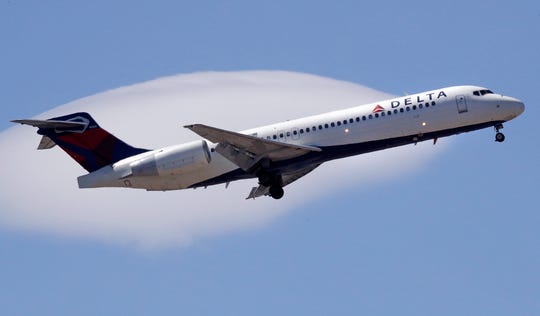 Airlines are expected to have a rough go of it in the coming months financially. (Photo: Charles Krupa, AP)

Already a bumpy ride for the “Big Three” carriers, the journey promises to get worse this fall when billions of dollars in government assistance comes to an end. Several carriers, including Delta Air Lines Inc. and United Airlines Holdings Inc., have begun openly contemplating how they will shrink operations, while American Airlines Group Inc. is moving to shed more of its older planes.

By one analyst’s count, as many as 105,000 jobs could be lost industrywide.

Airlines are barred from slashing jobs through Sept. 30 under the terms of a $50 billion government bailout, but they’re already warning employees that cuts are almost inevitable. The planned contraction reflects a widespread belief that 2020 revenues could shrink to levels not seen in years. Recovery will probably be a long-term affair, said Cowen & Co., which predicted that ticket sales may not rebound to pre-pandemic levels until 2025.

“The challenging economic outlook means we have some tough decisions ahead as we plan for our airline, and our overall workforce, to be smaller than it is today,” United’s chief executive and president, Oscar Munoz and Scott Kirby, wrote in an April 15 employee memo.

Unable to cut jobs or salaries while receiving grants to cover payroll, airlines will staff their typical summer peak largely as usual, even with millions of fewer travelers. But come fall, it could get ugly for employees. “We’re going to be smaller coming out of this,” Delta Chief Financial Officer Paul Jacobson told employees last month. “Certainly quite a bit smaller than when we went into it.”

The reversal of fortune comes as a shock for an industry that just last year was breaking passenger traffic records. Last week, the average number of U.S. daily passengers declined 96%, to 95,531, compared with 2.39 million last year, according to Transportation Security Administration data compiled by Bloomberg.

United shares fell Monday after it gave a snapshot of the industry bloodbath triggered by the pandemic, projecting a $2.1 billion loss in the first quarter. Delta, American and Southwest Airlines Co. will release their earnings in the coming days.

Such anemic demand means that anything less than a robust rebound over the coming months will prompt airlines to cut more employees, jettison older aircraft and cut more salaries, which in turn could persuade more workers to depart. During the past two months, at least 87,000 employees more than one quarter of the Big Three airlines’ workforce have taken voluntary leaves, early retirement or reduced work hours.

Carriers face “the worst cash crisis in the history of flight,” with booked revenues down 103% year over year, according to industry lobby Airlines for America. Domestic flights are averaging just 10 passengers while international flights average 24, the group said.

Southwest told union leaders it might slash some of its 60,000 workers this fall if a deal can’t be reached to cut labor costs further and traffic doesn’t return to more normal patterns. Any furloughs would be the first in Southwest’s 49-year history.

The government bailout bought employees and labor unions time to devise methods to lessen financial hardship, including bridges to early retirement and other separation programs, said Sara Nelson, president of the Association of Flight Attendants-CWA, which represents almost 50,000 attendants at 19 airlines, including United and Alaska Air Group Inc.

“This gives us time to plan for cutting down the ranks without just cutting people out of work,” Nelson said. “We’re going to be taking proactive steps to stave off as much hurt as possible in the fall.”

The union and its allies are also pushing Congress to amend the bailout legislation so that a dozen large airlines can keep about $6 billion the U.S. Treasury is currently expecting to be repaid.

The pace of any recovery for ticket sales this summer will dictate how many airline jobs are at risk, but so will carrier liquidity when balanced against their debt loads, said William Swelbar, an aviation consultant and a director of Hawaiian Holdings Inc. “It’s going to become a balance sheet story again,” he said.

Airlines like Delta and United are built atop global networks oiled by revenue-sharing alliances. Funneling corporate travelers through domestic feeder routes that can connect a New Hampshire hamlet with a Chinese manufacturing hub is where the money is. Removing those high-value passengers from the equation is akin to tossing sand in the gearsit forces carriers to quickly cut costs to make up the lost revenue.

“If you’re a network carrier, there’s your yield, and if that doesn’t come back fast, they’re really not designed to fly to Orlando and Vegas,” Swelbar said of the Big Three. The big question is “how fast does the business piece come back?”

While airlines foresee an uptick in bargain-hunting leisure travelers this summer, big money road warriors will take longer to win back. Corporations will be reluctant to assume the liability of putting employees back in the sky with Covid-19 still in wide circulation. Plus, many companies have learned to function via video conferencewhich is a lot cheaper than a business class seat.

“The longer we go, the more people Zoom, the slower business travel is going to come back,” said Swelbar.

Moreover, those who do choose to start flying again won’t be taking long-haul international flights, said Ben Baldanza, a director at JetBlue Airways Corp. and the former chief executive of Spirit Airlines Inc. “It’s going to be easier for people to think I’ll take a quick flight from Dallas to Los Angeles, but I am not going to go to the Middle East, Asia or Europe,’” he said.

The airline industry generally has taken three to four years to fully recover from major disruptions, said Samuel Engel, head of the aviation group at consultant ICF. Economic downturns often accelerate trends that were already underway, like pulling down marginal routes and, more recently, the decline in demand for large aircraft, he said.

“The last couple of years, you have seen extensions of flights toward end of day and early morning, and growth of long, thin routes to secondary cities in Asia,” he said. “Those types of things get pulled back, and some don’t reappear until quite late in the economic cycle.”

The coming industry pullback will also encompass revamping fleets and retiring older aircraft that are more expensive to operate and maintain. American Airlines has accelerated retirement of its oldest planes51 Boeing Co. 767s and 757sand will do the same with its fleet of 20 Embraer SA E190s and some 50-seat regional jets. It’s also weighing whether to retire its oldest Boeing 737s.

Delta is evaluating whether to speed the retirement of its oldest Boeing MD80 and MD90 aircraft, while United has said its oldest Boeing 757s and some 767s could also be grounded permanently, ahead of schedule.

“Without a quick improvement in demand, we could see the airlines look to shed 800 to 1,000 aircraft, which could result in a reduction of 95,000 to 105,000 airline jobs,” Cowen analyst Helane Becker wrote in an April 13 client note. “The rightsizing of the fleet and work force is an unfortunate truth.”