Tyner is Gannett's president of sales for the Great Lakes Region

Gannett Co. Inc.'s president of sales for the Great Lakes Region will lead the joint business operations of The Detroit News and Detroit Free Press, the media publisher said Thursday.

Eddie Tyner, 49, was named president of the Free Press and Michigan.com, effective immediately. Tyner is tasked with overseeing major initiatives to grow the business, including supporting and guarding the interests of The News and Free Press' combined sales, marketing and business teams under a joint operating agreement called Michigan.com. He also will be the Free Press' spokesman and support its news teams. 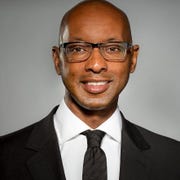 "As tough as these times are, there's never been a time more clear to me and hopefully to others how important organizations like ours are throughout the community," said Tyner, noting the partnership's audience has increased 50% year-over-year amid the COVID-19 pandemic.

"In taking the role, I want to do everything that I can to get the team the resources and access to solutions and tools they need. I am going to work hard in Detroit, and the Detroit market to get its fair share of resources so we can serve the community better."

The joint operating agreement seeks to maintain two separate and independent newsrooms with The News owned by Denver-based MediaNews Group and the Free Press by Gannett, which serves as general partner of the cooperation.

Tyner will continue in his role as president of sales for Gannett's Great Lakes region covering Michigan, Ohio, Indiana and Illinois. He will split his time between Detroit and Cincinnati, where he lives. Tyner plans to have an apartment or condo for a more permanent living situation here.

"I have spent a fair amount of time in Detroit in my previous role," he said. "I have seen all the development and revitalization in the area, and I am excited I get to work even closer and play an even bigger role."

Tyner also brings with him a background in the auto industry, working as senior vice president for sales at Cox Automotive Inc. prior to joining Gannett in 2017 as president of the Ohio region. Before Cox, he had several positions with the Tribune Publishing Co.

"During these extraordinary times, it’s essential to have a leader of Eddie’s caliber taking the reins in one of the company’s most important markets," Gannett executives wrote in an email to employees.

A 1995 graduate of Columbus State University, Tyner also has a master's in business from the University of Maryland. He is a board member for nonprofits including United Way and the Cincinnati Art Museum. Tyner and his wife have three children, ages 5, 3 and 1.