Bedrock to allow eateries, stores to stay rent-free in exchange for 7% of sales

To help downtown Detroit tenants weather the pandemic, beginning in July they will have the option to avoid rent though Dec. 31

Bedrock to allow eateries, stores to stay rent-free in exchange for 7% of sales

Detroit restaurants and retail stores located in buildings owned by Bedrock may be eligible to opt into new agreements in which they pay their landlord 7% of their gross sales from July through the end of the year instead of their usual monthly rent.

Dan Gilbert's commercial real-estate firm on Thursday announced "Bedrock Relaunch," the latest phase of a program introduced in March to help tenants weather the economic fallout of being shut down due to the coronavirus pandemic.

Regina Gaines, owner of the House of Pure Vin wine shop on Woodward, says business has been down about half while operating under reduced hours. She will strongly consider opting in to Bedrock's new program meant to help tenants who are struggling. (Photo: David Guralnick / The Detroit News)

Dozens of restaurants and retailers in Bedrock's properties received complete rent forgiveness for April, May and June, after Gov. Gretchen Whitmer shut down dine-in restaurant services and most retailers to stop the spread of COVID-19.

Restrictions are beginning to ease, but it could be a slow ramp-up for stores and restaurants that are limited by capacity restrictions and face an economic downturn that may depress consumer demand.

"It is becoming clear that even when all businesses are able to reopen, it's unlikely their sales volume will immediately return to pre-pandemic levels, and we want to make sure that rent barriers aren't a barrier to success," Bedrock CEO Matt Cullen said.

The deal may be a relief even for businesses that have been able to remain open, such as the House of Pure Vin wine shop on Woodward. Owner Regina Gaines estimates business has been down about half while the shop has been operating under reduced hours. She will strongly consider opting in to Bedrock's program: "I think it's great."

Starting in July and through the end of the year, Bedrock will give restaurant and retail tenants the option to waive their regular rent rate and instead pay 7% of their gross sales. Between properties in Detroit and Cleveland, 172 tenants will be eligible, according to Bedrock. A tenant must currently be operating as a retailer or food and beverage purveyor, or be a new tenant opening before Dec. 31. And, tenants must be up-to-date on rent, as of the start of the shutdown.

There is no cap on the 7% deal, so for businesses that have fared better during the shutdown, it might make more sense to stick with the original terms of their lease. And business owners who opt in would sign a six-month agreement; if they later wanted to opt out, they'd have to negotiate a new lease amendment, according to Bedrock.

For Latricia Wilder, owner of spin studio Vibe Ride Detroit on Randolph Street, the deal could mean a lifeline for her fledgling business that has been closed since March and has no scheduled reopening date. Wilder had already approached Bedrock about renegotiating the terms of her lease: "I basically was like, 'If I can't renegotiate, I can never reopen. There's no point in me even trying.'"

Because fitness studios will likely have to adhere to significantly reduced capacity limits when they are allowed to reopen, Wilder is certain she will end up saving on rent. She worries about what will happen after Dec. 31, but said this will at least help the studio survive the year: "I think it's a good solution for right now." 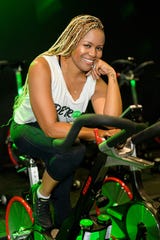 Latricia Wilder, owner of spin studio Vibe Ride Detroit on Randolph Street, says the rent offer could be a lifeline for her fledgling business that has been closed since March and has no scheduled reopening date. (Photo: Latricia Wilder)

Cullen described the initiative as a "pragmatic" business move, because the "relationship between the landlord and the tenant is symbiotic. One isn't successful without the other." He declined to provide specific figures on how much rent revenue Bedrock stands to lose.

"If (tenants) open and aren't successful and have to close, we're not going to get rent from some of them, and then you go through the expense and challenges of repopulating the stores," he told The Detroit News.

Wilder, too, sees the deal as mutually beneficial for Bedrock and downtown business owners: "People come and create a destination. If everybody starts closing, there's no reason to come back downtown and we're back to the ghost town that it once was."

Bedrock arrived at the 7% rate, Cullen said, because it's a general rule-of-thumb that tenants can afford to spend about that much of their gross sales revenue on rent. But rent rates from before the shutdown may not be affordable for businesses that are reopening to a very different set of business conditions. Michigan retailers, for example, can reopen this week, but by appointment only and with no more than 10 people in stores at a time.

"We went from a period of significant uncertainty, to another one," Cullen said. "(Tenants are) considering reopening. But they're not going to be at 100%, so the fixed rent is going to be challenging. So we said, 'Let's work together on it.'"

Additionally, Bedrock will continue to help tenants navigate new health and safety protocols or apply for government programs for which they might be eligible. The real-estate firm will aid with reopening logistics, as well, such as marketing or applying for permits needed to install additional outdoor seating, Cullen said. And, tenants that are eligible for the program may put their security deposit toward costs associated with reopening or modifying their space.

The security deposit aspect of the deal is what's most appealing to Kacee Must, owner of Citizen Yoga on Library Street. The yoga studio has adapted to the shutdown by offering recorded and live classes online, which required investments in equipment and software. Plus, the studio has been purchasing supplies such as a UV light to sanitize the space when it reopens.

"The biggest benefit is that small businesses have to invest more money in technology we've never had to use before," Must said. Bedrock "offering ... rent forgiveness and the other aspects of the deal are really allowing for us to make up for unexpected expenses. That is extremely relieving."

Bedrock is the landlord to 210 office tenants and 125 retailers and restaurants downtown. The company said it is considering additional initiatives to hasten downtown's recovery from the shutdown, such as converting parking lots to drive-in movie theaters and closing sidewalks and streets to increase outdoor dining capacity.

Bedrock is the developer of the $1 billion project that is converting the former J.L. Hudson's department store on Woodward into a mixed-use development. Work on the site, which had been halted due to state restrictions on construction activity, has now resumed. Cullen said Bedrock is targeting the end of 2023 for completion.

"We continue to be very bullish on Detroit and Cleveland," he said. "It would be naive to think this is not going to have some impact on some retailers and others as we get back to normal, but we continue to think that Detroit is a great investment."