The Detroit-based mortgage lender, founded and owned by billionaire Dan Gilbert, is the largest in the United States.

An initial public offering of Quicken Loans Inc., the largest mortgage lender in the United States, could value the Detroit-based company in the tens of billions of dollars, according to experts and a published report — if the company pushes ahead with the transaction.

The possibility comes just a year after billionaire Dan Gilbert, the company's founder and owner, was hospitalized from a stroke. The private company could turn public as early as next month, says a CNBC report citing sources, and possibly be one of the largest IPOs so far this year. 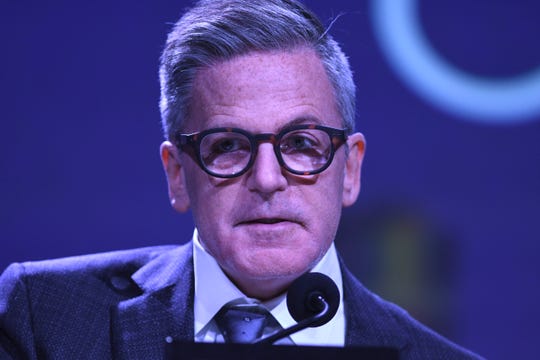 The company "is continuously looking for new ways to invest in and grow our business, while also contributing in significant ways to our home communities," a representative for Quicken and its Rocket Mortgage brand said in a statement.

"Given our continued growth, market leadership and strong financial performance, we are frequent targets of rumor and speculation. If, and when, there is news to report, it will come directly from us." The News could not independently confirm CNBC's report.

The mortgage lender is reported to have filed a prospectus confidentially, CNBC said, and could make the prospectus public as early as next month. The valuation remains undecided, but could rank among the nation's richest so far.

Gilbert, 58, required rehabilitation following the ischemic stroke in May 2019. The news shocked the business and political leadership of Metro Detroit, a group that had grown accustomed to Gilbert's aggressive acquisition and rehabilitation of iconic downtown properties.

"When you have a stroke, here's the problem with it: Everything is hard. Everything," Gilbert told Crain's Detroit Business in February. "Like you wake up, getting out of bed is hard, going to the bathroom is hard, sitting down eating at a table is hard. You name it. You don't get a break. You're like trapped in your own body."

Quicken closed $145 billion in loans last year. It also posted a record $52 billion loan volume in the first quarter, and results were pending strong in April and May, despite a sharp economic downturn spurred by the novel coronavirus pandemic, executives told The Detroit News last month.

For a capital-intensive industry like mortgage lending, a public offering can pay off handsomely for shareholders and allow a company like Quicken to grow its business more broadly than it has in the past, said Rick Sharga, a mortgage industry veteran and CEO of California-based CJ Patrick Co., a real-estate consulting firm.

“Having access to capital markets is a competitive advantage in many cases,” Sharga said, noting that most of Quicken’s competition comes from the banking sector.

There may be no better time in the mortgage industry for an IPO. Mortgage rates hit another record average low Thursday of 2.97%, according to Mortgage News Daily, which is leading refinance activity to run “red hot,” Sharga said. And low rates could stay that way for a while with Federal Reserve Chairman Jerome Powell on Wednesday saying benchmark interest rates aren’t expected to increase until 2023.

“At first blush you might say because of the pandemic it would be a bad time to do something like this,” Sharga said. “Strictly speaking from a mortgage perspective, the market is right.”

An IPO from Quicken would spotlight Detroit's successes as a growing technology hub after weathering its 2013 bankruptcy, said Erik Gordon, a professor at the University of Michigan's Ross Business School

"It'll also put a spotlight on the fact that Quicken is here," he said. "People in other parts of the country think of Detroit as cars, cars, cars. Well, surprise: The biggest mortgage lender is here."

Public offerings did slow in March as COVID-19 sent stocks into bear markets. This year, 76 companies including Warner Music Group, ZoomInfo and Vroom have gone public for a total market capitalization of $22 billion, according to the Nasdaq's economic research.

Such unpredictability in the market could spell trouble for four out of five companies, Gordon said. But "Quicken is in that select group of companies that can go public, even during these volatile times, because it's not a company that is based on a wish and a hope."

And it's not a perennial money-loser, such as public companies like Uber Inc. and Lyft Inc.: "Quicken is a real company," he said. "In fact, it's the biggest and best of its kind. If you buy the stock, it could go down, but at least it's a company that knows how to make money."

At the age of 22, Gilbert founded Quicken's predecessor 35 years ago. He sold the company to Canadian financial software firm Intuit Inc. for $532 million in 1999. Just three years later, though, Gilbert bought it back for $64 million.

In 2010, the company announced it would move its headquarters to Detroit's downtown One Campus Martius building from Livonia. The Quicken family of companies since has been a major driver of the city's economic rival, investing billions in purchasing and rehabilitating more than 100 buildings mostly downtown. They include the tower rising on the former plot of the J.L. Hudson's department store and an innovation center for the University of Michigan on top of Wayne County's "failed jail" site.

Altogether, the Gilbert-owned companies are Detroit's largest employer with more than 18,000 workers. And more are expected to come, as Quicken shared plans last month to hire more than 1,500 people in the coming weeks.

Gilbert, following a stint at a rehab center in Chicago, has returned to work. In his first public speech since his stroke in February, he approached the podium in a wheelchair but championed a bright future for the city.

"Whatever happened in the last 10 years," Gilbert said, "we're going to double down in the next 10 years."