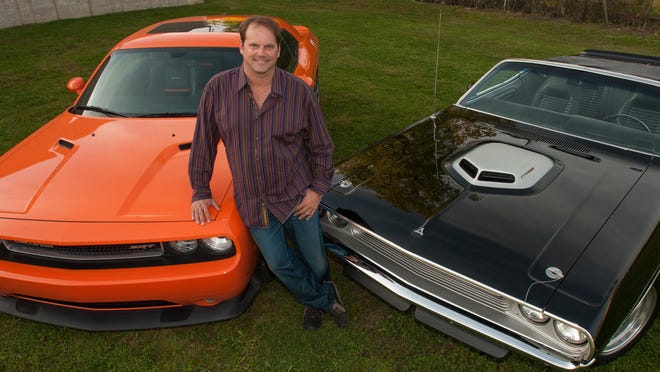 Brad Ahlgren grew up idolizing muscle cars of the late 1960s and early '70s, a time many consider to be the peak of styling and performance.

"It was an amazing era of vehicles," said the Bloomfield Hills resident. "Those were the cool cars when I was younger."

But in recent years, Ahlgren has found himself admiring a new generation of American muscle cars including the upcoming 2015 Dodge Challenger SRT Hellcat rated at an unprecedented 707-horsepower.

Dodge's Hellcat models, including the 2015 Charger with a top speed of 204 mph, are the top performers for a new era of American muscle cars that many didn't think they'd ever see again because of fuel economy regulations and higher gas prices.

"For a while, I thought this whole segment was in jeopardy," said Jessica Caldwell, Edmunds.com senior analyst.

"Everyone wanted to downsize and move toward more fuel-efficient vehicles. It seems like the pendulum is kind of switching back."

During the unveiling of the 2015 Charger SRT Hellcat last month in Metro Detroit, Dodge CEO and President Tim Kuniskis warned, "If you missed the first muscle-car era, don't miss this one. I don't know how long this could last, so take advantage of it now."

It's not just Chrysler that's driving this movement.

Ford Motor Co. will soon release its 2015 Mustang with its three available engines all producing at least 300 horsepower, a first for the pony car.

Ford also has the Mustang GT500, which puts out 662 horsepower.

As dynamometer numbers have spiked, so has buyer interest.

Combined sales of the Detroit automakers' four muscle cars — the Dodge Challenger and Charger, Chevrolet Camaro and Ford Mustang — have increased 45 percent from 2009-13, according to Edmunds.com. They're on pace to top 300,000 for a second straight year.

Challenger and Charger sales have been particularly impressive. Every year for the past five years they've become more popular, a rare occurrence as a vehicle's lifecycle ages. Combined, Chrysler has sold more than 1 million Chargers and Challengers with the current platform.

Chrysler Group LLC reports pre-orders for the $59,995 Hellcat Challenger topped 4,000 in its first four days. Pre-orders for the Charger, which Kuniskis has called a "four-door muscle car," are expected to open closer to its introduction early next year.

Automotive industry experts say that although muscle car sales remain a niche, they bring attention and excitement to the entire brand.

While Ahlgren and other classic muscle car enthusiasts love their old cars, there's no arguing that muscle cars from 50 years ago can't compete with today's modern vehicles when it comes to performance and technology.

All of the V-6 base engines for today's muscle cars are close to, or exceed, performance specifications of many muscle cars from the early '70s.

For example, a 1971 Challenger started at less than 150 horsepower and topped out at more than 400 horsepower with a Hemi.

The 2015 Challenger, available now, starts at 305 horsepower with a base V-6 engine. It tops out with the Hellcat's 6.2-liter Hemi supercharged engine at more than 700 horsepower and 650 pound-feet of torque; the car eat up a quarter mile in 11 seconds.

"The best muscle cars from the original muscle car era wouldn't have a chance against the modern ones," said Kelley Blue Book senior analyst Karl Brauer. "There is no downside to the modern muscle car."

Brauer noted that while automakers are pumping power into their "modern muscle cars," they're also upping fuel economy and including modern features like adaptive cruise control and infotainment systems that appeal to present-day buyers.

Peter Gongol, 19, convinced his father to pre-order a Challenger Hellcat for him.

"I've always liked muscle cars — and Dodge is the king of muscle cars and that's what drew me toward Dodge," he said, adding he's planning to go drag racing.

Dan Millen, a performance expert and co-owner of Livernois Motorsports in Dearborn Heights, also pre-ordered the Challenger Hellcat. He plans to take it to the track as soon as possible and test out the new technologies.

"It's really an amazing car," said the 38-year-old Dearborn resident. "For me, I'm more excited about a 2014-2015 car that has a backup camera, some really cool stuff and can go fast."

Chris Cowland, Chrysler director of advanced and SRT powertrains, said at a media event Monday, "The car looks like a modern version of a muscle car. That's what we wanted. We didn't want it to be a sports car. We wanted it to be that American-style muscle car."

Everything from exhaust roar to gear ratios were analyzed to meet that goal, he said.

There's no end in sight for the current muscle-car era, even as the government's 2017-25 fuel economy standards come into play, according to analysts.

Automakers are making today's muscle cars more fuel efficient — and other cars in the lineup that are less thirsty help balance out the overall fleet.

The 2015 Mustang, with a new four-cylinder EcoBoost that produces more horsepower than a traditional V-6, is rated at more than 30 mpg highway.

"They're trying to improve the fuel efficiency of these vehicles as much as they can," Caldwell said. "These cars create a lot of excitement in the auto industry. They're bringing emotion back to car buying."