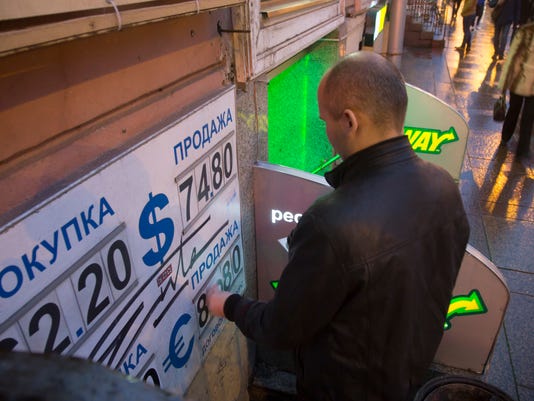 An exchange office employ changes a sign indicating the spread on the dollar-ruble and euro-ruble currency rates at an exchange office in St.Petersburg, Russia on Wednesday, Dec. 17, 2014.(Photo: Dmitry Lovetsky / AP)

Washington — The collapse in the Russian currency amid the continued dispute over Ukraine is costing the auto industry hundreds of millions of dollars.

General Motors Co. said it has raised prices, cut jobs and halted sales to dealers in Russia. Ford Motor Co. has said it has slashed jobs and reduced the value of its investment in Russia.

Among foreign automakers, Jaguar Land Rover has halted sales to dealers while Audi said it is delaying deliveries and studying whether to raise prices. Toyota Europe says it’s looking at whether to adjust prices and production.

GM said Thursday its Russia unit has temporarily suspended sales to dealers and has hiked prices. “We will continue to follow the developments closely and adjust our business, if needed,” GM said in a statement.

In September, GM reduced production to one shift from two in its St. Petersburg plant and increased vehicle prices to manage its business risk related to the volatility of the ruble.

Automakers are also shifting some vehicles away from Russia to more stable markets. Jaguar Land Rover has halted sales until next week, the company told Bloomberg News. Others plan to raise prices. Some Russians have sought to buy vehicles recently as a way to avoid further losses in the value of the Russian ruble.

The ruble has fallen more than 40 percent in recent weeks as the Russian government has tried to stabilize the currency — moves that have largely fueled more selling of the ruble.

Volkswagen AG’s Audi unit said due “to the increased currency volatility, we are thoroughly analyzing the further development of the ruble’s exchange rate and are evaluating a possible (change in) vehicle prices.” As a result, Audi Russia said it is delaying car deliveries from this week to next week.

Toyota Europe spokesman Jean-Yves Jault said the automaker has not raised prices due to the ruble’s fall.

“We will be forced to implement price increases to adjust to market prices but have not yet finally decided by how much or when exactly — but soon,” he said. Jault said Toyota does not plan to suspend sales, but warned price increases could affect demand.

Automakers are bracing for hundreds of millions of dollars in losses as vehicle sales have fallen in Russia amid western sanctions over the country’s takeover of the Crimea in Ukraine. Auto sales are down 12 percent in the first 11 months of the year.

GM’s business in Russia includes sales of Opel, Chevrolet and Cadillac vehicles. It also has a 50 percent joint venture that produces the Chevrolet Niva small SUV.

Opel Group Chief Financial Officer Michael Lohscheller, speaking earlier this month at the Goldman Sachs Global Automotive Conference in London, said GM has taken out a lot of inventory and reduced production in Russia. GM cut a shift at its St. Petersburg plant and laid off more than 500, Lohscheller said.

“We have taken actually drastic pricing actions, beginning of the year, but also now during the course of the year,” Lohscheller said. “Of course that has an impact on volume, no question.”

Ford earlier this year cut 950 jobs at two factories at its joint venture with OAO Sollers. In June, Ford wrote down the value of its investment in Russia by $329 million, the full amount at which it had valued its investment. Ford formed the venture in October 2011 that it valued at $367 million.

Gardiner said sales in Russia are down about 40 percent to 56,800 as of the end of November compared to the same period last year.

Earlier this month, Russian Prime Minister Dmitry Medvedev visited a Ford Sollers plant in Tatarstan where the joint venture was launching production of the Ford Ecosport.