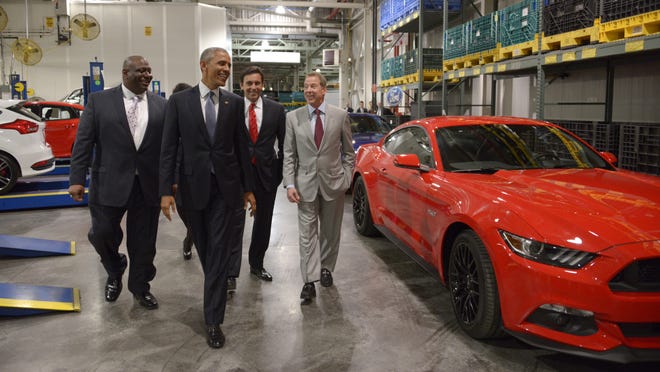 "We are entering the new year with confidence America is coming back," Obama told a crowd of 750 Ford workers and employees, who interrupted his 25-minute speech multiple times with cheers and applause. "This state proves no matter how tough times get, Americans are tougher."

Obama used the speech to highlight his administration's bailout of the auto industry and manufacturing gains across the country. He is stopping in several cities to give similar speeches ahead of his Jan. 20 State of the Union address.

The president, introduced by Ford employee Mia Dew, touched on subjects from apprenticeships to health care to Afghanistan. On multiple occasions, he evoked sympathy for the Detroit Lions, who lost Sunday in a controversial playoff game to the Dallas Cowboys.

"We may not all root for the Lions, but America is rooting for Detroit," Obama said.

His remarks came at a plant that's temporarily shuttered due to low demand for the fuel-efficient Focus and C-Max hybrids it makes, as sales of trucks and sport utility vehicles have soared.

But the president noted Ford has recently brought back 2,400 jobs to the United States from Mexico, including 1,800 at the Wayne-based factory. The government bailout loans went to General Motors and Chrysler but weren't sought by Ford.

Helping to drive the country's economic gains are America's status as the No. 1 producer of oil and gas, Obama said. It has resulted in the price of gas at the pump being $1.10 a gallon lower than it was a year ago, and the fuel-efficient cars made by the Ford Wayne factory help drivers go farther, he said.

"Because everybody came together here and worked together, folks are better off," he said. "And some of the most high-tech, fuel-efficient, high-powered, heart-pounding, good-looking, well-designed, fuel-efficient cars in the world are once again designed, engineered, forged and built not in Europe, not in Asia, (but) right here in the United States of America."

He noted Michigan's unemployment rate has been cut in half as the state has experienced the creation of 100,000 manufacturing jobs.

"The auto industry has proved that any comeback is possible, and so has the Motor City," Obama said.

The president noted Detroit's recent emergence from bankruptcy — the largest municipal financial failure in U.S. history — as well as other signs of progress. He cited new stores popping up downtown and blight being cleaned up.

"Under the leadership of Mayor Mike Duggan, Detroit is charting a new course," Obama said. "It still faces some challenges, but you're coming back."

The president was accompanied on the factory visit by two Democratic lawmakers, U.S. Sen. Gary Peters of Bloomfield Township and U.S. Rep. Debbie Dingell of Dearborn, and Duggan appeared at the plant.

While the president sought support for his policies, Michigan Republicans criticized Obama for trying to take credit for gains made by the GOP in the state, including Gov. Rick Snyder.

"In the wake of Republicans' sweeping victory in Michigan and across the nation, President Obama should take note of the common sense, responsible policies that are driving the economies in the states like ours."

Snyder and a Republican-led Legislature have slashed business taxes and reduced state regulations, among other policies.

Before the speech, Obama toured the plant that employs about 5,100 workers. During a portion of the tour open to media, he spent about five minutes with Ford Executive Chairman Bill Ford and President and CEO Mark Fields, looking at a white F-150 pickup, a red Focus, a white and black Focus ST and a red and blue Mustang.

Obama briefly entered a red Focus, but was more interested in a red Mustang, saying "I gotta get in!"

When he disembarked from the Mustang, Obama remarked "This is an American car right here, this Mustang. This is beautiful."

United Auto Workers President Dennis Williams used Obama's visit to tout how cooperation and shared sacrifice of the union, automakers and government took the industry from its darkest day to the "economic bright spot of the international economy."