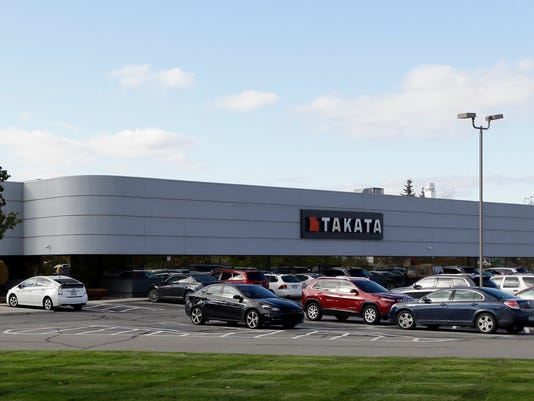 The National Highway Traffic Safety Administration announced Saturday that more than 2 million Toyota, Chrysler and Honda vehicles are being recalled for faulty air bags that may inflate while the car is running. The agency says about 1 million Toyota and Honda vehicles involved in the new recalls are also subject to a separate recall related to defective Takata air bags that could deploy and rupture with enough force to cause injury or death.(Photo: Carlos Osorio / AP)

Washington — The National Highway Traffic Safety Administration said Saturday that four automakers are issuing a new recall for more than 2.3 million vehicles for a electronic defect that may cause air bags to deploy inadvertently — and asking the parts supplier and automakers for more information about the extend of the issue.

The new recalls will provide vehicle owners with a new remedy after the manufacturers’ original attempts to fix the electronic defect in a series of recalls in 2012, 2013 and 2014 wasn’t “fully effective,” NHTSA said. NHTSA said it has reports of about 40 vehicles in which air bags deployed unexpectedly after receiving the original recall fix.

NHTSA Administrator Mark Rosekind told reporters on a conference call Saturday automakers may not have the upgraded fix until the end of the year. He said the agency is asking automakers what they could do to “speed it up.”

Asked if the agency had pressured automakers to make the new recall, Rosekind said yes. “We’re the ones who identified it and then were in contact with manufacturers,” Rosekind said.

But no deaths have been linked to the issue — and there have been no injuries in any of the vehicles previously recalled and fixed. Automakers notified NHTSA that they would agree to the expanded recall late Tuesday and some privately questioned why the auto safety agency held an extremely unusual conference call with reporters on a Saturday to announce the recalls.

The agency issued an urgent warning to consumers to still the get the initial recall repaired.

The agency said each carmaker has said it will eventually replace the air bag control module in all the affected vehicles after the initial fix was installing a electrical noise filter.

“In the meantime, it’s very important for vehicle owners to take their car in for the temporary remedy to protect the electronic control unit from damage. While it has not been 100 percent effective, this fix will significantly reduce the chances of an inadvertent air bag deployment that could cause injuries or a crash,” NHTSA said

NHTSA said it seeking additional information from supplier Livonia-based TRW, which made the electronic part believed to be involved in the inadvertent deployments, about the potential defect, its causes, and whether other makes or models are impacted, along wit information from the automakers about how quickly they can make the new remedy available.

Administration (NHTSA) that it would be recalling more than two million vehicles due to air bags that might deploy inadvertently because of a faulty control switch, Senators Edward J. Markey (D-Mass.) and Richard Blumenthal (D-Conn.) thanked NHTSA for taking swift action and called for clarity and fast action on other Takata air bag safety defects. Some of the vehicles made by Toyota and Honda included in this recall also use the deadly Takata air bags that can deploy too forcefully, maiming or killing drivers and passengers.

Sens. Ed Markey, D-Mass., and Richard Blumenthal, D-Conn., praised the action in a joint statement Saturday. “NHTSA's vigilant review of consumer complaints and automaker reports shows that the effectiveness of past safety recalls must be aggressively monitored, and we are gratified that NHTSA is taking action to remedy this particular defect. When information is used, manufacturers and automakers are held accountable, consumers are protected, and countless lives can be saved,” they said. “There is a pressing need for strong action to ensure that the necessary parts are manufactured more quickly and that automakers are subject to enforceable, nationwide recalls for all the impacted vehicles.”

NHTSA said owners should take the issue seriously — especially because about 1 million Toyota and Honda vehicles involved in these new recalls are also subject to a recall related to defective Takata air bags that may deploy with enough explosive force to cause injury or even death to vehicle occupants.

In total, 10 automakers have now recalled more than 14.5 million vehicles with Takata bags since 2013. Honda said Friday it confirmed a Takata air bag ruptured in a sixth death on Jan. 18 in Houston.

NHTSA said because of the dangers involved in an inadvertent air bag deployment, “and because some of the vehicles involved may also have defective Takata air bags, NHTSA urges consumers who were covered by the original recalls to take their vehicles to their local dealer for the original remedy. That remedy significantly reduces the chance of an air bag deployment that presents a safety.”

NHTSA said Saturday it discovered the issue through the monitoring of incoming data that some vehicles remedied under the previous recalls may have experienced inadvertent deployments.

FCA US LLC said worldwide it will recall 928,000 vehicles for the issue. The automaker said it will upgrade a repair performed as part of a 2012 recall. “In that action, a filter was installed to ensure proper function of a potentially faulty (occupant restraint control) supplied to (Chrysler) and two other vehicle manufacturers,” Chrysler said. “Since that time, a small number of vehicles affected by the initial campaign (approximately 0.003 percent of the total) were subject to post-repair inadvertent air-bag deployments. Some vehicle occupants suffered minor injuries from contact with the air bags; FCA US is aware of a single related accident.”

FCA said the new parts are being developed for the new recall. “Some vehicles also may require new front- and/or side-impact sensors to accommodate software compatibility,” the company said.

Rosekind said it was unfortunate that some owners may have to return to a dealership more than once. “But this is an urgent safety issue, and all consumers with vehicles covered by the previous recalls should have that remedy installed. Even though it’s a temporary solution until the new remedy is available, they and their families will be safer if they take the time to learn if their vehicle is covered and follow their manufacturers’ instructions. A hassle is much better than a family tragedy,” he said.