SUVs, trucks to debut in Chicago

SUVs, trucks to debut in Chicago

Unveiling of the Mitsubishi GC-PHEV concept car during the media preview of the Chicago Auto Show. Bob Chwedyk/AP
Fullscreen

Mitsubishi will unveil its Concept GC-PHEV at the Chicago Auto Show. The Mitsubishi Concept GC-PHEV ("Grand Cruiser") is a futuristic next-generation full-size crossover that combines the capability and energy efficiency of a dynamic plug-in hybrid electric vehicle (PHEV) powertrain in a muscular-looking yet highly refined vehicle. Mitsubishi/Wieck
Fullscreen

A model unveils the 2016 Toyota Avalon during the media preview of the Chicago Auto Show on Thursday, Feb. 12, 2015. Andrew Nelles/AP
Fullscreen

Toyota's big reveal will be the 2016 Avalon, almost shown in this teaser image. Toyota
Fullscreen

The 2016 Toyota Avalon is unveiled. The refreshed 2016 Avalon adds more refinement with an array of styling, performance and technology enhancements. Andrew Nelles/AP
Fullscreen

New features on the back of the Avalon include refined LED taillights and a chrome rear bumper accent. Andrew Nelles/AP
Fullscreen 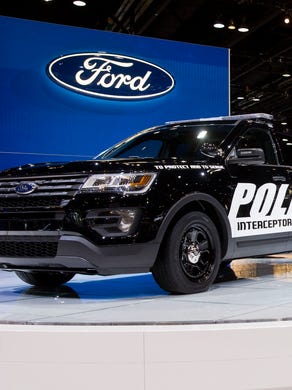 People walk through displays on the show floor during the media preview of the Chicago Auto Show at McCormick Place in Chicago on Thursday, Feb. 12, 2015. The Chicago Auto Show will be open to the public from Feb. 14 through Feb. 22. Andrew Nelles/AP
Fullscreen

The 2016 Acura RDX is unveiled during the media preview of the Chicago Auto Show. Andrew Nelles/AP
Fullscreen

An interior view of the 2016 Acura RDX. Andrew Nelles/AP
Fullscreen

The new nose of the 2016 Honda Pilot. Andrew Nelles/AP
Fullscreen

The 2016 Honda Pilot is unveiled during the media preview of the Chicago Auto Show. Andrew Nelles/AP
Fullscreen

The Kia Trail’ster concept car is unveiled during the media preview of the Chicago Auto Show at McCormick Place in Chicago, on Thursday, Feb. 12, 2015. Andrew Nelles/AP
Fullscreen

The Kia Trail’ster concept car is unveiled during the media preview of the Chicago Auto Show. Andrew Nelles/AP
Fullscreen

Based on the double-cab Silverado LS, the Custom package adds 20-inch aluminum wheels, chrome bumpers, mirrors and door handles. Most Silverado Custom customers are expected to choose the 5.3L EcoTec3 V-8, with 355 horsepower and the best fuel economy of any V-8 pickup, up to 23 mpg EPA estimated highway. Brian Kersey/Chevrolet
Fullscreen

Toyota will debut the 2016 Corolla Special Edition during the Chicago Auto Show. Based on the sporty Corolla S Plus grade the car will feature steering wheel paddle shifters, rear disc brakes and Sport Driving Mode along with an array of additional standard features including unique 17-inch alloy wheels with gloss black finish and a black interior with red contrast stitching. Toyota
Fullscreen

The Corolla Special Edition will be available in three colors: exclusive Absolutely Red, Black Sand Pearl and Super White and will be produced between August and December 2015 with production limited to 8,000 units. Toyota
Fullscreen

The "Maximum Attack" FR-S features a 1970s look with incorporation of racing heritage. The Speedhunters team gave the vehicle a custom louvre treatment with an IMSA style look. The visual standout on their design is overfenders as part of a special edition kit designed by Kei Miura. Scion
Fullscreen

The winning vehicle of Scion's 10th annual Tuner Challenge is coming to the 2015 Chicago Auto Show. The Speedhunters-designed "Maximum Attack" Scion FR-S makes its first public appearance since November when it was crowned winner of the Scion Tuner Challenge at the Specialty Equipment Market Association (SEMA) Show in Las Vegas. Scion
Fullscreen

General Motors will unveil a refreshed version of its Chevrolet Equinox, left, and a custom-edition of its Silverado pickup, above.(Photo: GM)

Automakers are rolling out new SUVs and special-edition cars and trucks at the Chicago Auto Show on Thursday as low gas prices continue to help juice sales of larger vehicles.

General Motors Co. will unveil a refreshed Chevrolet Equinox and a custom-edition Silverado pickup, while Honda Motor Co. takes the wraps off the 2016 Pilot. Toyota Motor Corp. will show its new luxury Avalon sedan — as well as special versions of its Camry and Corolla. Hyundai Motor Co. is showing a special edition of the Veloster.

Fiat Chrysler Automobiles NV and Ford Motor Co. also will debut special models in the Windy City. Ram Truck will unveil redesigned luxury versions of its top-end Laramie Limited light- and heavy-duty pickups that feature exclusive amenities and exterior styling, including a new chrome grille, to help them stand out from the rest of the Ram lineup.

Automakers like special-edition models because they are loaded with more options and are more profitable. With a stronger economy, low interest rates and up to eight-year loan repayments, many buyers are willing to pay for higher-riced models that only result a modest monthly payment increase.

Many ideas for the new vehicles come from the specialty equipment and aftermarket industry, which is two to five times more profitable on a profit-margin basis than new vehicle sales, according to Hanno Lorenzl, EY Global Automotive & Transportation Center senior manager. "The importance of the whole sector, everybody is paying a lot more attention," he said.

Like many models, the Equinox is getting updated safety features — including standard rear visibility cameras — and fancier touches like a larger color radio display.

The 2015 Silverado Custom sports 20-inch aluminum wheels, chrome bumpers, a body-colored top cap above the front bumper, and chrome mirror caps and door handles. It starts at $33,820 compared with $31,940 for a similar truck without the custom features.

"The economic recovery has led to booming sales of high-end pickups like the Silverado High Country," said Sandor Piszar, marketing director for Chevy Trucks. "But there are also millions of customers in the heart of the market who want a great looking, well-equipped truck at an affordable price."

The Ram luxury pickups include all the bells and whistles of a luxury crossover or sport utility vehicle including fine leather, real wood interior components, unique badges and LED lighting.

Despite all the trucks, the show will have a number of green car announcements and reveals.

GM North America President Alan Batey is expected to confirm the automaker plans to build the Chevrolet Bolt at its Orion Assembly plant.

The electric vehicle will get 200 miles on a single charge and retail for around $30,000 after federal tax credits.

Ford Motor Co. will show off its 2016 Police Interceptor utility, developed with the help of law enforcement.

Kelley Blue Book senior analyst Karl Brauer said while sales of crossovers, SUVs and pickups were increasing before the drop in gas prices in 2014, lower prices are likely pushing some on-the-fence buyers toward larger utility vehicles. "When you start comparing small CUVs and mid-size SUVS and compact and mid-size sedans, I think a lot of people who are considering vehicles just don't see that much of a gap."

But it is recognized as one of the top consumer-focused auto shows.

"It's the place automakers have a real great show stand and a solid presence of new products, so the people that actually buy cars can get up close, behind the wheel," Brauer said.