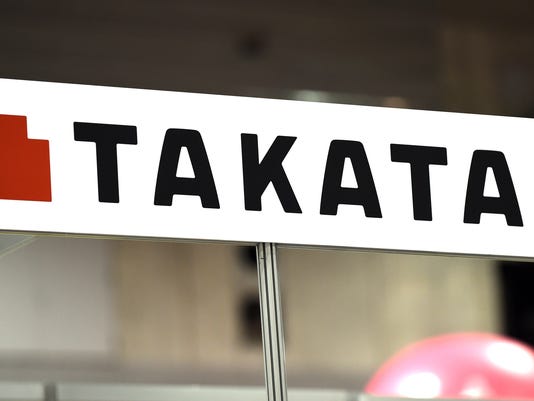 The inflators, which are in cars made by 10 auto companies, can explode with too much force, spewing shrapnel into drivers and passengers. At least six people have been killed and 64 injured worldwide due to the problem.

Transportation Secretary Anthony Foxx announced the fines on Friday in Richmond, Virginia, on a bus tour to promote a major transportation bill.

He called Takata a “bad actor” and said the fines will grow each day that it fails to comply with two special orders issued last year by the department’s National Highway Traffic Safety Administration.

Takata responded in a statement, saying, “We are surprised and disappointed by the DOT/NHTSA letter and press release today, and we strongly disagree with their characterization that we have not been fully cooperating with them.

“In response to NHTSA’s special orders, we have provided the agency with almost 2.5 million pages of documents to date. Since the special orders were issued, we have been in regular communication with NHTSA staff regarding our ongoing production of documents in response ... We remain fully committed to cooperating with NHTSA in the interests of advancing auto safety for the driving public.”

Takata has resisted demands to recall its driver’s side air bags nationwide, although automakers have done recalls themselves. The agency also has demanded data from the company, but said in a letter to Takata that it has failed to explain a “deluge” of 2.4 million pages of documents that were turned over. Federal law requires Takata to provide a catalog or index with the documents so investigators know what to look for.

Takata officials have said publicly that they are cooperating, but that’s not the case, Foxx said. “This is silly,” he said. “We have a very serious defect issue. We’re working as hard as we can to get defective (cars) off our roads. … We will not tolerate this.”

Fines will continue to accrue until Takata “fully and substantively” explains the documents, according to a letter NHTSA sent to Takata.

NHTSA communications director Gordon Trowbridge said on a conference call with reporters, “NHTSA will use every tool available to get the defective air bags off American highways.”

He said Takata’s cooperation has been “unsatisfactory” and “unacceptable,” and if the company continues to not cooperate, NHTSA will pursue depositions of Takata executives. Trowbridge said NHTSA recently went to Takata’s Michigan facility to better understand its testing procedures.

NHTSA has said Takata’s inflator propellant — ammonium nitrate — can burn faster than designed if exposed to prolonged moisture in air. That can cause it to blow apart a metal canister meant to contain the explosion.

So far, automakers have recalled about 15 million vehicles in the U.S. and about 22 million globally due to problems with Takata inflators.

There could be as many as 30 million vehicles with the air bags nationwide.

Fines from NHTSA are capped at $35 million per infraction. Since Takata is alleged to have violated two orders, it could be fined a maximum of $70 million. At $14,000 per day, it would take nearly 11/2 years to reach the cap.

“The $14,000 a day is lunch money for a car company or parts supplier, but it sends the message that NHTSA is not fooling around when it comes to quickly investigating issues and recalling vehicles, if necessary,” said Michelle Krebs, senior analysts with AutoTrader.com.

Takata may keep paying the relatively small fines rather than guiding NHTSA to documents that could result in bigger penalties, said Kelley Blue Book analyst Karl Brauer: “It’s kind of probably another cost of doing business that they can roll into some budget line and not really even notice it.”

Takata controls about 20 percent of the world air-bag market.