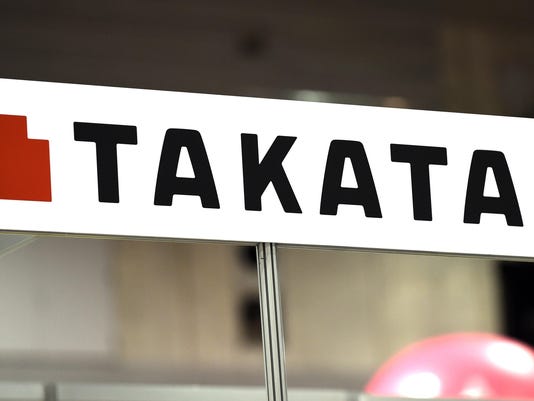 The National Highway Traffic Safety Administration sent letters to seven more major automakers that use Takata air bags, saying it is considering requiring an expansion of record-setting recalls by 11 automakers.

The letters ask the automakers how many vehicles have Takata air bag inflators, and whether they are considering recalls. The air bags are linked to at least eight deaths and more than 100 injuries, caused when propellant explodes with too much force and sends metal fragments flying.

The agency is holding an Oct. 22 public hearing as it moves to oversee the massive recall that covers nearly 20 million U.S. vehicles.

The agency said different remedy programs by each automaker created a patchwork solution that it believes may not adequately address the safety risks.

NHTSA said last month that it was investigating the rupture of a Takata air bag in a 2015 VW Tiguan in Missouri in June.

The German automaker — which surpassed Toyota Motor Corp. as the world’s largest automaker in the first six months of 2015 — told The Detroit News earlier this year that it was not part of the Takata air bag recall of up to 33.8 million vehicles by 11 automakers.

The incident raises several questions, including how many VW vehicles worldwide may be impacted. The rupture of a side curtain air bag came soon after the vehicle was built and is not similar to other incidents that involved prolonged exposure to high humidity areas. The inflator can explode when activated, throwing shrapnel at drivers and passengers.

The special orders to Takata and the German automaker disclose that a Takata air bag inflator known as an SSI-20 ruptured in a 2015 Tiguan SUV on June 7. This is the fourth special order that NHTSA has sent to Takata — which has its North American headquarters in Auburn Hills — demanding documents. The U.S. Attorney’s Office in Detroit is conducting a criminal investigation into Takata’s handling of recall issues.

Takata spokesman Jared Levy said last month the company doesn’t think the VW incident is related to the other problems.

In June, Takata told Congress it will reduce the use of controversial air bag inflator propellant ammonium nitrate, as it faced harsh criticism for not moving faster to make fixes.

Takata vice president Kevin Kennedy told a House committee that the Japanese manufacturer will continue to use ammonium nitrate in its inflators — even as its competitors use other propellants — but said he expected that the company’s use of the compound will decline as it shifts to another chemical.

“We also have alternate propellants now with guanidine nitrate. We started production a year or two ago and we’re continuing to ramp those up. I think overall you will see our production of ammonium nitrate go down rapidly,” Kennedy said.

But he reiterated at various points that Takata will not immediately halt the use of the propellant. He noted that in newer air bags it is adding a drying agent to the compound that also extends the life of the air bag.

NHTSA previously ordered Takata to disclose all air bag inflators that it had sold to various automakers in the United States. In April, NHTSA upgraded its investigation into 12 million vehicles with potentially defective Takata air bags. And it began levying $14,000 in daily civil penalties against the supplier for failing to respond to requests for information about more than 2.5 million pages of documents it has produced.

Under the consent deal announced in May, NHTSA suspended more than $1 million in fines and said it would stop imposing daily fines.