Soup it Up: Hey, Mad Max, your ride is ready

Valyrian Steel made its debut at Burning Man festival

Soup it Up: Hey, Mad Max, your ride is ready 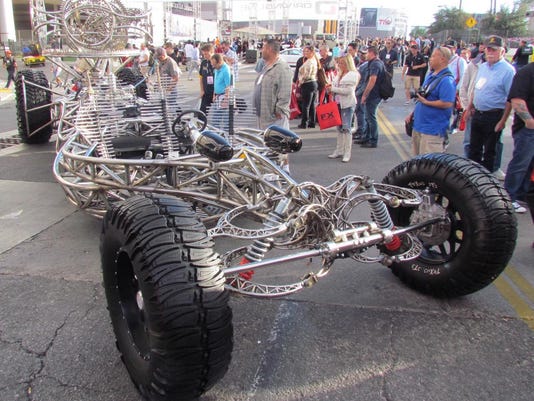 Well, it has an engine. And four wheels with fat tires. And somewhere amid all that tubing there is seating for five people. But stretching more than 27 feet in length, and with a clockwork sculptural structure mounted high above the pavement, this “car” resembles nothing that ever rolled off a Detroit automaker’s assembly line.

In fact, it looks like more like the skeletal remains of some prehistoric beast than any sort of motor vehicle. And even as a motor vehicle, it looks like it would be much more at home in a Max Max movie than on any urban street or even way-out-in-the-boonies Interstate highway.

The Valyrian Steel was built by Henry Chang, an artist in Las Vegas. Chang was commissioned to craft such a vehicle for driving across northern Nevada’s Black Rock desert during the annual Burning Man counter-culture gathering that assembles each year around Labor Day.

“A city in the desert. A culture of possibility. A network of dreamers and doers.” That’s the motto on the Burning Man website, though some may see the Valyrian Steel as more of a nightmare than anyone’s dream.

But it is someone’s dream, and Chang and his team spent 2,000 man-hours of work just on what you see here, which made its debut last summer at Burning Man and which we saw late last fall at the annual Specialty Equipment Market Association Show of automotive aftermarket product producers in Las Vegas.

Still to come are fenders and other sculptural bodywork that are expected to be ready in time for Burning Man 2016.

Powered by a 5.0-liter Ford Coyote V8 engine, Valyrian Steel can cruise Black Rock’s alkaline surface at speeds between 5 and 45 miles per hour while carrying a driver — sitting front-middle — and four passengers, one on either side and slightly behind the driver, the other two in the second row.

The vehicle takes its name from the artifacts — weapons and armor — featured in the books and HBO series “Game of Thrones.”

Valyrian Steel isn’t Chang’s first automotive art piece. He previously has done his own iHeartCar, an art car that in photos looks like sort of an overgrown series of Slinky toys made into a motor vehicle.

John Perez of Chang’s Playaworks group was stationed with the car at SEMA with a hard copy of the “frequently asked questions” sheet you often find on websites. Between Perez and that sheet, we learned that production began last April, and that Chang started by fabricating the passenger compartment, and then the front suspension, and then used those components as their inspiration for the rest of the vehicle as it more or less emerged or evolved as the team worked its way rearward.

Unlike Detroit vehicles, there was no clay model, but Chang did some computer-aided design work while bending lots of 305 and 316 stainless-steel tubing.

Oh, and that tall thing on the top of the rear section of the car is a kinetic sculpture with gears that turn via a hand crank. Perez said the sculpture is based on the tourbillon, an 18th-century watchmaker’s creation that employs moving parts within a rotating cage instead of springs to keep accurate time.