The ranged from the Mazda MX-5 Miata with retractable fastback hardtop, to the snarling Jaguar F-Type SVR

Sports cars were the attention-getters on the floor of the auto show Wednesday. From the everyman’s Mazda MX-5 Miata with retractable fastback hardtop, to the snarling 575-horsepower Jaguar F-Type SVR, they looked like they were going 100 miles per hour standing still.

Is it a Porsche Targa? A Ferrari 308? No, it’s a new Mazda MX-5 Miata hardtop convertible.

Tongues were wagging at the MX-5’s New York Auto Show unveil over how radically different Mazda has gone with its retractable hardtop. So different that Mazda now calls its hardtop Miata a “retractable fastback.” So different that it drew comparisons to some much-pricier European sports cars.

Officially called the MX-5 RF (for retractable fastback), the wee Mazda sports a more sophisticated look in the small convertible-sports segment it has defined for over a quarter century. If “Targa” were not a Porsche trademark, the new Miata would surely get the name. Unlike the previous generation hardtop — or the base, $25,735 soft-top Miata — the RF features sloping “flying buttress” B-pillars that taper to the rear deck and remain standing when the roof folds behind the front seats.

Below the hardtop, the 2017 RF changes little from the popular fourth-generation MX-5 (other than a new color: “Machine Gray”) that has received rave reviews from the motoring press. In the U.S., the RF will sport Mazda’s “SKYACTIV” 2.0-liter engine pushing out 155 horsepower. Automobile magazine named the car one of its “2016 Automobile All-Stars” Tuesday — the latest in a string of baubles that includes finalist for 2016 North American Car of the Year and a spot in Car & Driver’s Ten Best List. 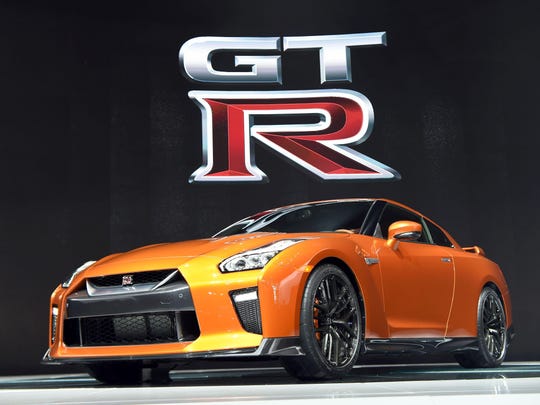 The 2017 Nissan GT-R — aka “Godzilla — gets a refresh that includes a stiffer chassis and 20 more ponies, boosting it to 546 horsepower. (Photo: Jewel Samad / Getty Images)

Whenever Nissan advertises a sequel to “Godzilla,” fans light up the Internet.

So when Nissan announced a refreshed GT-R (nicknamed after Japan’s favorite sci-fi monster) for this year’s New York show, expectations rose for the latest in all-wheel-drive sports car aggression.

Alas, Nissan’s promise of an all-new GT-R by 2020 is still in place. But the 2017 model is the most comprehensive refresh since the monster was introduced way back in 2007 — a lifetime ago in auto development.

To maintain its status as one of the planet’s fastest cars, it gets a stiffer chassis and more horsepower. The GT-R’s twin-turbo, 3.8-liter V6 now boasts a neck-snapping 546-horsepower — 20 ponies more than previously. And if more muscle is needed, Nissan offers the 591-horsepower Nismo edition (zero-60 in 2.7 seconds).

But the real focus is its refined wardrobe to address criticism this Godzilla was too raw in an era of plush, $100K-something Corvette Z06s and Audi R8s.

The bolstered seats are more comfortable. Shift paddles are now mounted to the steering wheel so motorheads can snap off gear changes mid-corner without having to move their hands from the helm.

Look for it at dealers late this summer.

On the heels of the attractive Coupe crossover, Mercedes reminded the world why sedans are still the standard in auto beauty with the introduction of the stunning, 2017 AMG C63 Cabriolet.

The low-slung, drop-top version of the C-Class Mercedes — introduced to the world in Geneva earlier this month — now gets the brand’s ground-thumping, V8-powered AMG performance. Mercedes shoppers will now have a choice of a 469-horsepower, turbo-V8 in the AMG C63 or a 503-horse turbo V8 in the AMG C63 S. An AMG 43 is also available with a turbocharged V-6. The AMG Cabriolet joins a C-class sedan and coupe in the U.S. market.

The AMG 63 S will reach 174 mph and hit 60 mpg from a standing start in 4 seconds flat. It is distinguished by flared wheel arches at the front and rear, a wider track and large wheels. It will hit showrooms this fall.

Spring must be in the air because performance cars were dropping their tops all over the New York auto show floor. The topless 2017 Audi R8 Spyder makes it all the better for drivers to hear the car’s glorious, screaming V-10 engine.

That V-10 is the same 8,700-rpm, 540-horsepower, 5.2-liter powerplant that motivates the R8 Coupe. Unlike the Mazda and its surprise Targa-style hardtop, the R8 convertible plays it safe, largely maintaining the previous-generation’s stowable open-cockpit softtop. Not that that’s bad.

Fifteen percent lighter and more chiseled than the previous R8, the Spyder is a high-tech wonder from its 12-inch, digital virtual cockpit display to its torque-vectoring, all-wheel drive system. 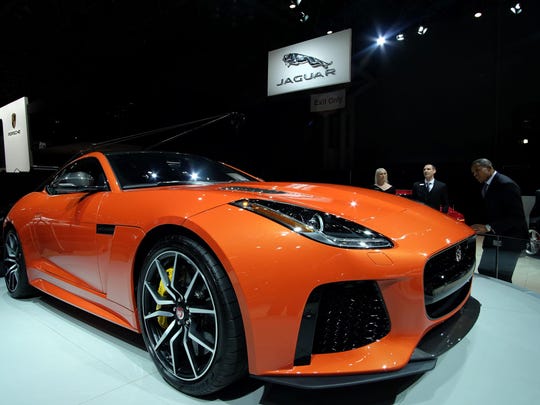 Jaguar hit the auto show with a roar as the resurgent brand unveiled its halo supercar F-Type SVR — the pride of its U.S. litter.

Equipped with snow-shredding all-wheel drive, Jaguar bills the F-Type as its “200 mph, all-weather supercar.” That is, if owners want to get this $125,000 beauty caked in salt.