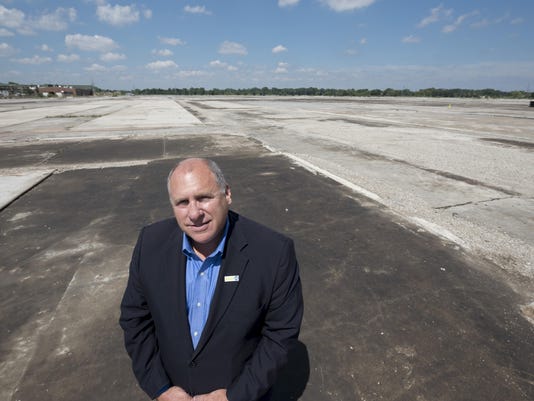 American Center for Mobility CEO John Maddox says, “We don’t have to pitch (the site); they already get it.”(Photo: David Guralnick / The Detroit News)Buy Photo

Ypsilanti — The American Center for Mobility has grand plans to transform the weed-strewn concrete ruins of the former Willow Run bomber plant into a world-class autonomous car test site, but it still needs tens of millions of dollars to make it a reality.

The state of Michigan has pledged $3 million, and officials expect approval this month for an additional $17 million in state aid. But the nonprofit still needs another $60 million to fully realize a 335-acre test site that would include tunnels, bridges, traffic stops, suburban cul-de-sacs and city streets to test the driverless cars of tomorrow.

Newly appointed CEO John Maddox has been pitching federal agencies like the National Highway Traffic Safety Administration and the Department of Energy to provide money. Although he doesn’t yet have any guaranteed federal funding, he said the site isn’t a tough sell.

“Michigan has the largest grouping of automotive expertise in the world,” he said. “We envision the American Center for Mobility as a national lab for connected and automated vehicle and transportation technologies. ... Frankly, we don’t have to pitch it; they already get it.”

The American Center for Mobility doesn’t own the land it plans to build on; it’s owned by the RACER Trust, the entity tasked with maintaining and selling former General Motors Co. land that was not part of the new company created out of bankruptcy. Maddox says that in coming weeks, RACER is expected to sell the land to Willow Run Arsenal of Democracy Landholdings LLP, which will then lease the property to the American Center for Mobility.

If everything — the state funding, land transfer and lease — goes according to plan, construction on the first phase of the test site could begin by year’s end, or at least by early 2017. That first phase, which will focus on operational facilities and a 21/2-mile highway simulation loop, can be completed without any federal dollars, Maddox said.

Whereas sites like MCity focus on early-stage technology development, Maddox said Willow Run would focus on later-stage product development, including final testing. Maddox envisions a meeting facility on the site for a panel of automotive leaders and government officials to debate and set autonomous car standards.

“We think we’ll be able to accelerate the development of the standards themselves because we’ll have the immediate ability to test what the experts are thinking of,” Maddox said.

The site where Rosie the Riveters once built B-24 bombers is now an abandoned expanse of concrete, weeds and trees. But some traces of the plant remain.

The smooth concrete surrounding the old assembly line still slopes, a design quirk meant to let the planes easily roll from one end of the plant to the other. Every so often the gray slabs are broken by small slices of tile where bathrooms once stood.

Traffic signals placed by GM when it owned the site as the Willow Run Assembly Plant still remain, and will be used for testing. Already-existing rail lines used to transport product to and from the plant will be re-purposed for testing as well. And large water tanks from the plant’s prior life will be used to partially flood the streets for wet-road testing. The site is working to buy from MDOT a small stretch of Michigan Avenue — currently a public road — and shut it down for a high-speed highway test track.

Maddox hopes the site will receive full funding to help keep Michigan ahead of other states and countries.

“What’s at stake is the leadership of the automotive industry and nothing short of that,” Maddox said. “This tech will revolutionize the way we think about designing, building, purchasing and using vehicles. It’s a critical piece for the Michigan economy and automotive industry.”