Car collector Larry Klairmont, 89, at his showroom in Chicago. Klairmont Kollections consists of more than 300 cars spanning over a century of automotive history in a non-descript building on Chicago’s northwest side.(Photo: Zbigniew Bzdak / TNS)

Chicago — Larry Klairmont’s early interest in cars got him into a bit of hot water. It was during the Depression and 5-year-old Larry was a particularly small boy whose family was so poor they ate potatoes for months on end. Naturally, the youngster had few toys. And he was bored.

“One day when I was walking home from school I was looking at parked cars and noticed all these hood ornaments,” said Klairmont, who grew up with his grandmother in small-town Maywood, Illinois. “Being a little aggressive, I started taking the ornaments off. I took them home and put them on display, and a few days later we get a knock on the door. Two police officers. One says to my grandmother, ‘I’d like to see Larry Klairmont.’ She said ‘Let me find him for you.’ He helped drag me out from under the bed. The policeman looked at me and said, ‘This is Larry Klairmont?’ He laughed and told me not to do that anymore.”

While Klairmont’s criminal antics ended, his passion for cars endured. These days he owns Klairmont Kollections, a glistening assemblage of 319 vehicles that represents motoring history. The private museum, which caters to charities and other organizations and is available for tours, is housed in a nondescript building on Chicago’s northwest side. Vehicles range from a 1906 American Motors Tourist and rare 1924 Pierce-Arrow Series 33 to a 1958 BMW Isetta and 1979 Ferrari 308 GTS.

Klairmont Kollections consists of over 300 cars spanning over a century of automotive history in a non-descript building on Chicago’s northwest side. (Photo: Zbigniew Bzdak / TNS)

With its 30-foot ceilings, the two-level museum takes up nearly 100,000 square feet, including a 24,000-square-foot expansion opened last year.

Open since 2011, the museum includes re-creations of a Packard dealership, the iconic Route 66 Cucamonga Gas Station and a classic drive-in theater featuring an array of coupes from the ’50s and ’60s. Neon and vintage posters and signage abound throughout the collection.

At nearly 90, Klairmont’s ardor for life remains undimmed. For one thing, he has a Can-Am Spyder motorcycle that he likes to ride.

“He’s an amazing guy,” said Andrew Vogel, who handles marketing for the collection. “He’s at the museum nearly every day, looking after one project or another. Not only does he expend that much energy, but the museum gives him a lot of energy too.”

Klairmont started collecting cars in earnest a couple of decades ago. Before that he was busy being a World War II hero (twice wounded, he was awarded two Silver Stars, a Bronze Star and two Purple Hearts), raising five children and starting from scratch what would become one of the nation’s largest dry cleaner chains. He sold that business and founded what turned into an extremely successful real estate company, in which he’s still involved.

“He didn’t know his real father, and his mother was having a hard time, so he figured out early that if he wanted something done he’d have to do it himself,” said Klairmont’s fiancee, Joyce Oberlander, who helps a lot with the museum. “He’s been an extremely hard worker all his life.” 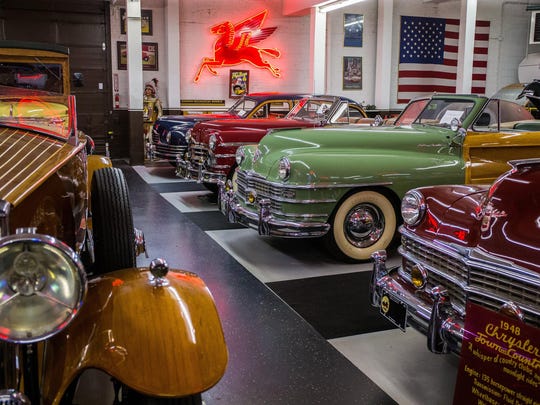 Open since 2011, Klairmont Kollections museum includes re-creations of a Packard dealership, the iconic Route 66 Cucamonga Gas Station and a classic drive-in theater featuring an array of coupes from the ’50s and ’60s. (Photo: Zbigniew Bzdak / TNS)

He’s also been a car guy pretty much his whole life. At just 6, he knew every car make and model. A year later, he would study cars while making money using roller skates to deliver Chinese food. Fresh out of the Marines, Klairmont bought his first car, a 1935 Plymouth that he said wouldn’t go over 35 mph.

“During the war every car manufacturer was involved in producing items for the war,” he said. “Pent-up demand for cars after the war resulted in a waiting list of up to 18 months for a car. However, if you put $100 cash in a dealer’s pocket, you got bumped up.”

In college, he grudgingly bought for $9,000 a 1951 Rolls-Royce Silver Dawn convertible from a buddy in need of cash.

“It drove like a truck, it had no heating or AC, but everywhere I went I got a thumbs-up. People would be climbing all over the hood. One day I came outside and someone was underneath the car. He said he’d never been under a Rolls-Royce before.”

Klairmont also owned a Cadillac. One day he was getting it serviced when the manager of the Rolls-Royce dealership next door came running over. He wanted Klairmont to check out a new Rolls. Klairmont grudgingly agreed to a test drive and the manager told him if he still had his Rolls, a customer wanted to buy it.

A widower who had been married for 60 years Klairmont still loves to tool around. His daily driver is usually his new Tesla Model S. He also owns a 2010 Rolls-Royce Ghost and a new Rolls-Royce Phantom Drophead, plus a couple of Bentleys, one of them a drop top. He occasionally drives a 1936 Auburn supercharged convertible that he keeps at his museum.

In his decades of collecting, Klairmont has seen the auto industry change, for better and worse.

It’s “absolutely fantastic” how much cars have improved technologically in the last few years, he said. 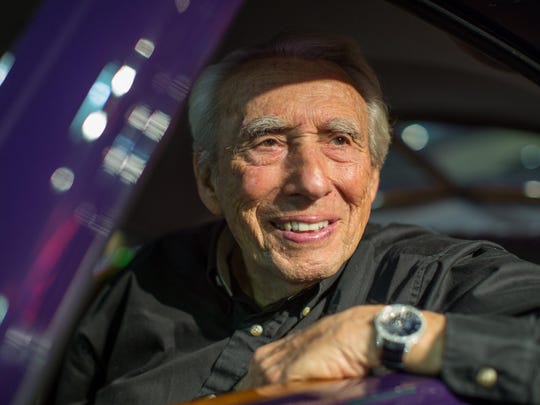 Car collector Larry Klairmont, 89, in his 1937 Rolls-Royce Phantom III Aero Coupe at his showroom in Chicago in June. Klairmont Kollections consists of over 300 cars spanning over a century of automotive history in a non-descript building on Chicago’s northwest side. (Photo: Zbigniew Bzdak / TNS)

Still, he laments the ever-diminishing pool of old-school mechanics. A few years ago, he and Oberlander drove a 1964 Rolls-Royce Silver Cloud 3 to a party, and gave the keys to the doorman. “The party’s over and we come out, and we’re waiting and waiting. Meanwhile, all the other guests are gone. I asked them where the hell my car was. They told me they were trying to get it started. I get a ride to my car in a golf cart and we pull the plugs and use jumpers, and it still won’t start. What happened was the valet had backed over a curb, which tripped something that wouldn’t let it start,” he said.

“My mechanic drives to us from 45 minutes away and we worked on that car for an hour. Nothing. We decide to try in the morning. Still nothing. So we get it towed. We take it to a specialist who immediately goes behind the glove box and presses a little relay button that isn’t even in the owner manual. These kinds of guys are dying out.”

Once the couple began attending a lot of car functions, Oberlander suggested Klairmont put all his cars in one place. At the time, he had close to 40 cars. Now, the museum is so expansive it takes four hours to navigate. When the two have time, they visit other car museums. He wishes more young people were interested in classic and antique vehicles.

Oberlander, who is 80, said she and Klairmont, who can still fit into his Marine uniform, live sensibly. “He likes to eat a lot of soup, probably a carry-over from his youth. We eat simply and he works out. He has good upper-body strength, and has never been a drinker or smoker.