Donald Trump addresses the crowd during a campaign event Friday, Aug. 19, 2016, at the Summit in Lansing. Dale G. Young, The Detroit News
Fullscreen

Republican presidential candidate Donald Trump sought to appeal Friday to African-American voters who typically side with Democrats before a nearly all white crowd at a sports complex. Making remarks directed at African-American voters, Trump asked: “What do you have to lose by trying something new, like Trump?” Dale G. Young, The Detroit News
Fullscreen

Donald Trump tosses a signed hat to a fan after he addressed the crowd during a campaign event Friday, Aug. 19, 2016 at the Summit in Lansing. Dale G. Young, The Detroit News
Fullscreen

Fans try to get a picture of their favorite candidate after Donald Trump addressed the crowd. Dale G. Young, The Detroit News
Fullscreen

Fans with cellphones in the air surround a little girl on her father's shoulders as Donald Trump addresses the crowd. Dale G. Young, The Detroit News
Fullscreen

With a pistol on her hip, Libertarian candidate for Michigan's 62nd house district, Michelle Gregoire of Battle Creek demonstrates against Trump before the GOP candidate event. Dale G. Young, The Detroit News
Fullscreen

Donald Trump is surrounded by a sea of supporters hold signs as he gives a speech. Dale G. Young, The Detroit News
Fullscreen

Donald Trump gives a speech to the crowd in the Summit sports complex. Dale G. Young, The Detroit News
Fullscreen

Donald Trump waves to the crowd and applauds them at the Summit in Lansing. Dale G. Young, The Detroit News
Fullscreen

Fans with phones and cameras vie for the best shot as Donald Trump addresses the crowd. Dale G. Young, The Detroit News
Fullscreen 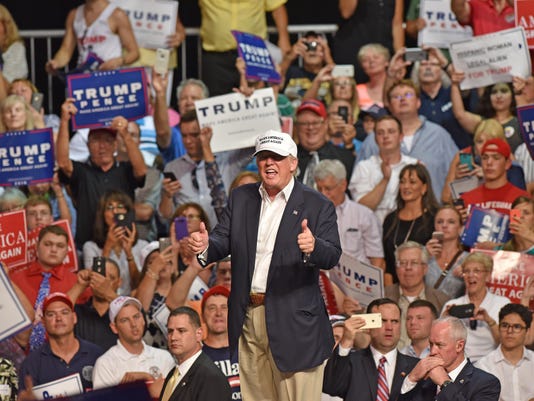 Donald Trump addresses the crowd during a campaign event Friday, Aug 19, 2016 at the Summit in Lansing.(Photo: Dale G. Young / The Detroit News)Buy Photo

Dimondale — Republican presidential candidate Donald Trump said Friday that Mexico could soon become the “car capital of the world” because of a free trade agreement that has prompted automakers to move some production south of the border.

Trump again criticized U.S. trade pacts including the North American Free Trade Agreement with Canada and Mexico and the loss of manufacturing jobs, especially in Michigan.

“The Michigan manufacturing sector is a disaster,” Trump told the crowd in Dimondale, about six miles from General Motors Co.’s assembly plants in Lansing and Delta Township. “Mexico will become the car capital of the world very, very quickly… unless you elect Donald Trump.”

Ford Motor Co., GM and others have flocked to Mexico in recent years because of cheaper labor. Whereas top-tier union auto workers in the United States make about $29 an hour, Mexican auto workers make the U.S. equivalent of between $8 and $10 an hour, according to the Center for Automotive Research.

CAR expects Mexico’s automotive-assembly capacity to more than double between 2010 and 2020. In a recent report, the organization said the country’s capacity ceiling “has no bounds,” although it says the growth could benefit American and Canadian auto suppliers.

Trump has made his opposition to NAFTA a staple of his campaign. He has vowed to renegotiate the 22-year-old trade deal and is willing to walk away if the United States doesn’t get the deal he wants.

A 2015 Congressional Research Service review of the trade agreement found it had a “modest” effect on U.S. economic growth because trade with Mexico and Canada comprise a small amount of America’s economic output.

Jerry Dias, president of the Canadian automotive workers union Unifor, told The Detroit News earlier this month that Trump is “a fool,” but is correct to criticize NAFTA. The United Auto Workers union has also criticized the trade deal as a job killer.

Trump also hit the Trans-Pacific Partnership Friday, the proposed trade agreement involving 12 nations from Asia and elsewhere, saying “we’ll withdraw from the deal before that deal can ever, ever happen.”

His Democratic rival, Hillary Clinton, has said she also does not support the deal, but Trump said she’d flip-flop.

“She will be backing TPP ... mark my words,” he said, referring to Virginia Gov. Terry McAuliffe’s comments during the Democratic convention in July that she would support the pact with changes.

None of Detroit’s automakers support TPP, which also has drawn criticism from Unifor and the UAW.

Trump called out recent decisions by Ford and GM to expand investment in Mexico and pointed out recent news that FCA would lay off a more than a thousand American workers.

“Many people in this audience who have jobs, you’re going to find out very soon your company is leaving for Mexico or some other place and you’re not going to have a job anymore,” he said. “And if Trump gets in, those days are over.”

The real estate developer promised to slap a “substantial tax” on Mexican-made cars and trucks headed for the United States if companies don’t change their ways.

In the past, Trump has vowed the tariff would be 35 percent. But in a late July Detroit News interview in Toledo, he became more flexible, saying the tariff could be as low as 5 percent.

In his Friday speech, Trump promised the new tariff, which would require congressional approval, would generate “a lot” of revenue. Tariffs don’t generate much cash for the federal Treasury.

The billionaire’s comments hit close to home for Kevin Stamper of Wyandotte, who works on the line at Ford’s Michigan Assembly Plant in Wayne.

“He’s going to keep jobs here in America,” Stamper said. “I build the Focus and the C-MAX, and they’re shipping those to Mexico.”

About six hours before Trump’s arrival, Democrats assembled at the Dimondale venue to criticize his visit.

Former U.S. Rep. Mark Schauer and Lansing-area union workers gathered argued that Trump’s promises to stand up for American workers do not match his track record.

UAW Local 652 President Mike Green pointed to reports that many of Trump’s own branded products are made overseas, and he criticized Trump’s August 2015 comments to The News that Ford could limit its expansion in Mexico by moving some Michigan jobs to lower-wage states.

“Some of these people already work 40 hours,” Green said, “and a family of four still qualifies for food stamps at the end of the month. What does he think, they ought to be making less?”

Schauer, a Battle Creek Democrat who ran unsuccessfully for governor in 2014, said Trump would be a “disaster” for Michigan, noting the businessman’s tepid assessment of the auto industry bailout during a campaign stop last year in Birch Run.

“Here in Michigan, and right here in Lansing in the shadow of auto plants employing hard-working Michiganders, that would have been a loss of thousands of Michigan jobs,” Schauer said.

As a U.S. senator from New York in 2008, Clinton voted for Troubled Asset Relief Program funding, part of which the Bush administration used to help support GM and Chrysler. She supported larger investments by the Obama administration that helped guide the companies through structured bankruptcies in 2009.