Apple looks to take a stake in automaker McLaren

While it’s been focusing more on self-driving software, Apple has never abandoned efforts to tie up with a carmaker

Apple looks to take a stake in automaker McLaren 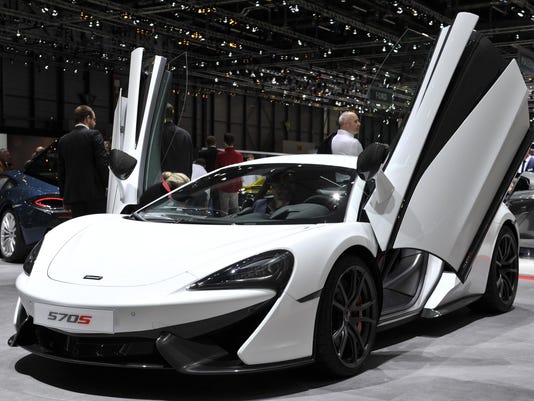 A McLaren 570S is displayed during the Geneva Motor Show 2016 on March 2, 2016 in Geneva, Switzerland. Apple Inc. has approached McLaren Technology Group, the U.K. builder of supercars, about a potential acquisition, the Financial Times reported Wednesday without citing sources.(Photo: Harold Cunningham / Getty Images)

Apple Inc. is seeking to take a strategic stake in luxury carmaker McLaren Technology Group, according to people familiar with the situation.

The technology company is more likely to make a large investment than an outright acquisition, said one of the people who asked not to be identified because the matter is private. TheFinancial Times earlier reported that Apple was considering buying all of McLaren or taking a stake in the U.K.-based carmaker.

Eager for a new hit to replace the iPhone, Apple has hundreds of engineers working on car design and has been targeting a release as soon as 2020. While the company has been focusing more on self-driving software in recent months, it has never abandoned efforts to build its own vehicle or tie up with an established carmaker, according to people familiar with Apple’s thinking. With sports cars starting at almost $200,000, McLaren would bring brand strength, advanced engineering and a portfolio of patents to the equation.

“I can confirm that McLaren is not in discussion with Apple about any potential investment,”McLaren Chief Executive Officer Michael Flewitt said in a text.Apple declined to comment.

In a call with analysts earlier this year, Chief Executive Officer Tim Cook suggested Apple would do more acquisitions and strategic investments. Apple had $232 billion in cash at the end of June, about $215 billion of that is kept outside of the U.S., Cook told investors in July.

The New York Times reported Wednesday that Apple is also in talks about potentially acquiring Lit Motors, a San Francisco startup that has developed an electric motorbike.

Many analysts have speculated that Apple would buy Tesla Motors Inc., deemed a good fit because it sells electric cars with self-driving capabilities. Tesla shares gave up an early rally once the FT news broke.

Buying a stake in McLaren is less obvious because the U.K. company is best known for luxury cars that go very fast. What’s more, the company lacks mass-manufacturing capabilities. McLaren can make only a few thousand cars a year, compared with mainstream automakers with several factories each cranking out hundreds of thousands of auto each year.

Dominic O’Brien, a London-based analyst at Exane BNP Paribas said, acquiring McLaren would be a “strange move” for Apple. “They wouldn’t gain manufacturing scale or much know-how about mass-produced cars,” he said. “McLaren isn’t known for electric cars or its autonomous driving capability.”

Apple is working on a self-driving project dubbed Project Titan, according to people familiar with the plan. The company recently hired the former head of BlackBerry Ltd.’s automotive software division and has continued to raid auto companies for engineers with expertise in designing vehicle manufacturing systems.

The question, said William Blair & Co. analyst Anil Doradla. is whether Apple uses McLaren as a “tech incubator” or for “rolling out a car.”