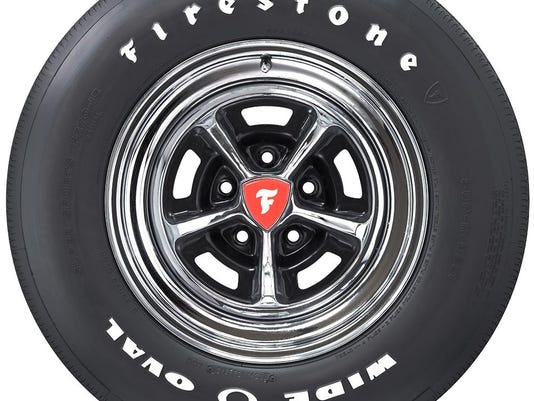 Those who grew up during the muscle car era may remember when Firestone released its first Wide Oval tires. That occurred in 1967, and the fat Firestones became the tire of choice for putting power to the pavement for the makers and the owners of Pontiac GTOs and other Woodward stoplight racers.

The Wide Ovals were bias-ply tires, and were soon to be replaced by the sturdier radials that were entering the market.

“The GTO was introduced in 1964 and was still on 1950s skinny tires,” said automotive expert and television commentator Steve Magnante. “The Firestone Wide Oval was a major step.”

Nice, but tires wear out, and even if not abused, they have a limited life before their materials break down and no longer are safe for driving.

Fast-forward a few decades and people are restoring muscle cars and want them to look as authentically original as possible, but at the same time have more modern driving characteristics, the stopping and turning dynamics only possible with radials around the wheels.

The problem is that radials and bias plies just don’t look the same. Yes, both are black and round, but there are details in which they differ. Or at least in which they did.

Nearly a decade before Firestone launched its Wide Ovals, a BFGoodrich tire dealership in Chattanooga, Tennessee, began producing replacement tires for people with antique vehicles. Over the years, Coker Tire grew into perhaps the world’s leading supplier of specialty tires for all collector vehicles, cars and motorcycles, ranging from the earliest of motorized vehicles to Detroit muscle cars and many more.

Late in 2016, Coker introduced a new Firestone Wide Oval tire, and while these look just like the original bias-ply version, with the same shoulder shapes, tread patterns and sidewall engravings — even the red stripe! — they actually are radial tires in their construction and their dynamic characteristics.

You can think of them as “retro radials,” said Corky Coker, son of the company founder and chief executive of the Coker Group, which not only includes the tire company but others ranging from those which make vintage-looking wheels to one that stages The Great Race, a cross-country tour/race for classic cars.

Although the new Coker-produced Firestone Wide Oval is a radial, “It squeals just like its supposed to,” Corky Coker assures.

“No longer will the car be driving you,” he added. “You get to drive your car.”

Retail pricing is in the $200 range per tire, depending on size. For more information, visit www.cokertire.com.

Larry Edsall is a Phoenix-based freelance writer. You can reach him at ledsall@cox.net.