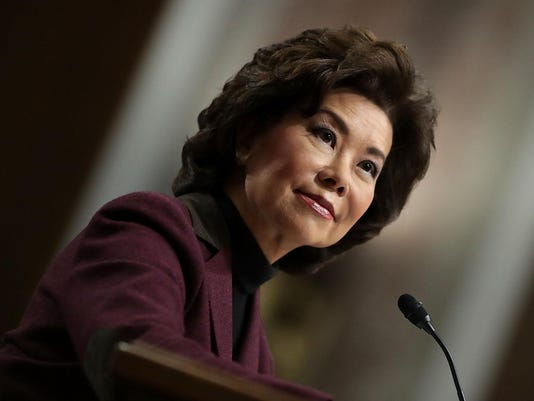 Elaine Chao testifies during her confirmation hearing to be the next U.S. secretary of transportation before the Senate Commerce, Science and Transportation Committee in the Dirksen Senate Office Building on Capitol Hill January 11, 2017 in Washington, D.C.(Photo: Chip Somodevilla / Getty Images)

Washington — President Donald Trump’s pick to run the U.S. Department of Transportation was approved by a Senate committee on Tuesday.

Trump’s choice of former U.S. Labor Secretary Elaine Chao, 63, to lead the transportation department in his administration was approved by the U.S. Senate’s Commerce, Science and Transportation Committee on a voice vote.

Chao’s nomination will now go to the full Senate for approval. A GOP Senate aide said a final vote on her confirmation could come as early as today or tomorrow.

The former Labor chief’s selection has been seen as one of Trump’s least controversial Cabinet picks.

U.S. Sen. Gary Peters, D-Bloomfield Township, said that when he met with Chao on Jan. 9, he was able to raise the importance of connected and automated vehicle technologies as an issue the federal government should continue to focus on in the coming years.

If Chao is confirmed by the full U.S. Senate as expected, she would become U.S. Secretary of Transportation at a time when federal regulators are scrambling to craft new rules for self-driving cars as automakers and tech companies race to develop the new technology.

The transportation department will also be involved in a review of federally mandated fuel economy standards that have emerged as hot-button issue early in the Trump’s tenure in office. Automakers have been pushing the Trump administration to roll back a mandate from the Obama administration that requires them to achieve a fleetwide average of 54.5 miles per gallon by 2025. The Obama administration moved quickly to finalize the rules ahead of schedule before the former president left office, over the objection of automakers.

When Chao was asked about the mileage rules in a confirmation hearing on Jan. 11, she said she is looking forward to reviewing the work that has preceded her on the regulations.

“This issue is going to be coming up,” she said in response to a question from U.S. Sen. Ed Markey, D-Mass. “It is going to be an important one for the department, and before I comment I would like to do so responsibly and I would like to get up-to-date briefings of what’s happening in the department. Again, I look forward to so soliciting your points of view and working with you as we go forward.”

Chao, who is married to Senate Majority Leader Mitch McConnell, R-Ky., led the Labor Department for the full eight years President George W. Bush was in office. She formerly was deputy U.S. Secretary of Transportation and chairwoman of the Federal Maritime Commission.

Chao has also been chief executive officer of United Way of America and director of the Peace Corps. She worked as vice president of syndications at BankAmerica Capital Markets Group and as a banker with Citicorp in New York.

The Senate Commerce Committee also approved the nomination of investor Wilbur Ross to be Commerce Secretary, bringing another Trump Cabinet appointment one step closer to confirmation.