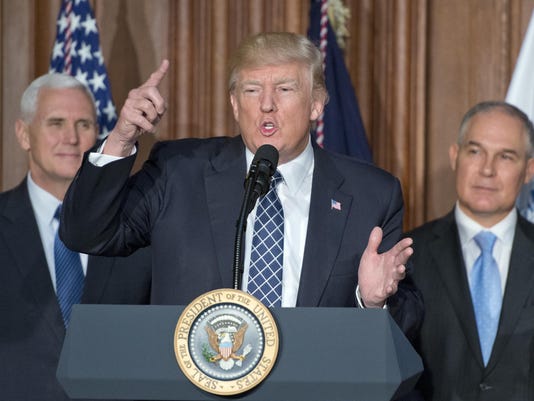 Washington — President Donald Trump signed an executive ordered Tuesday that’s aimed at rolling back a series of climate regulations put in place by former President Barack Obama. The measure is aimed mostly at rules governing coal-powered plants, but its potential impact could be felt by the auto industry.

The order calls for the U.S. Environmental Protection Agency to halt implementation of the so-called “Clean Power Plan” adopted by the Obama administration in 2015. The plan being reversed set limits on the amount of carbon dioxide that states are allowed for fossil fuel-power plants.

Although Trump’s executive order is unlikely to directly affect auto companies, it does contain language that directs federal agencies to abandon the use of a measurement that was intended to calculate the potential negative economic impacts of carbon dioxide emissions.

Under Trump’s new directive, agencies would only consider the positive economic benefits and job creation of potential regulations with little consideration of possibility of environmental harm.

The estimate of a potential economic benefit from carbon reduction was used by the EPA and National Highway Traffic Safety Administration in 2010 and 2012 when the agencies crafted mileage rules that require automakers to produce car and truck fleets averaging around 50 miles per gallon by 2025. Several car manufacturers have argued that lower gas prices have made fuel-efficient cars less desirable to customers who are looking to buy larger vehicles such as SUVs and trucks.

John Graham, a former administrator of the Office of Management and Budget’s Office of Information and Regulatory Affairs and current dean of the Indiana University School of Public and Environmental Affairs, said about 20 percent of the environmental benefits forecast by the federal agencies when the mileage rules were put in place were related to economic savings the Obama administration argued would be realized by reducing pollution. The rest of the benefits were related to gas savings for drivers, he said.

Trump has already signaled his intention to reverse an Obama administration decision to lock in the mileage rules for model-years 2022-25. Those rules were originally scheduled to be reviewed in 2018, but the EPA under Obama moved over the objection of the auto industry to finalize them days before Trump’s inauguration.

“We are going to restore the originally scheduled mid-term review, and we are going to ensure that any regulations we have protect and defend your jobs, your factories,” Trump said in a March 15 speech at the American Center for Mobility in Ypsilanti.

Lobbyists for automakers in Washington have pushed the Trump administration to pump the brakes on Obama’s decision to finalize the stringent fuel economy rules, which critics have estimated would add at least $2,000 to the sticker price of a vehicle.

“Our job is to build and sell more fuel-efficient vehicles that produce less carbon, and when consumers go car-shopping today, they are seeing improved energy efficiency across all models,” the Alliance of Automobile Manufacturers said in a statement after Trump signed Tuesday’s executive order.

Environmentalists have lambasted the Trump administration for moving to roll back mileage rules and other climate initiatives put in place by the former president, arguing the regulations have been exhaustively reviewed since they were first implemented.

“I think the science and the technology that is in the review speaks for itself,” Sierra Club Associate Director for Federal Advocacy Andrew Linhardt said. “Automakers can meet the 2025 regulation and we don’t think there is anything in the record that will allow them to roll back the requirements.”