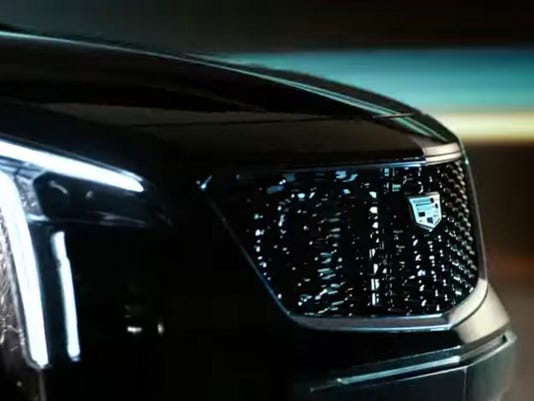 Cadillac has been teasing its XT4 in online videos.(Photo: Cadillac / YouTube)

The auto industry’s luxury segment may be struggling to set itself apart as the average car gets more infused with technology and high-end interiors. But two of Detroit’s glitziest brands are hoping to make a splash this week in Manhattan.

“There’s been this unraveling of the traditional luxury sedan as a status symbol, and it’s been replaced by SUVs,” said Karl Brauer, an automotive analyst for Kelley Blue Book.

That’s been a problem for Cadillac, in particular, which invested heavily in its sedan lineup just as the car market continued to shrink. The brand is hoping to remedy that with an onslaught of new SUV products through the end of 2020, starting at the New York auto show with the reveal of its XT4, Cadillac’s first-ever compact SUV. It will join the larger XT5 and the Escalade.

Cadillac saw sales slip 8 percent in 2017, with only the CT6 sedan and XT5 posting an increase in deliveries. The brand saw some improvements through the first two months of 2018, up 5.3 percent on gains for the ATS and Escalade.

Lincoln has more to offer in the way of SUVs — four including the red-hot Navigator that debuted at the New York auto show last year — but the MKC, MKT and MKX are struggling. Lincoln says some of that skidding is part of a wind-down of the alphanumeric names. The MKX will become the Nautilus later this year, and the MKC is expected to follow, though a new name hasn’t been announced yet.

The Ford luxury brand also will freshen its SUV lineup with the revival of the Aviator in New York. The newest Lincoln SUV is expected to fit between the Nautilus and the full-size Navigator.

And the New York Auto Show’s reputation as a luxury show means the Aviator and XT4 will be debuting among a horde of high-end vehicles, with new products or trim levels expected from Audi, Mercedes-Benz, BMW and even Fiat Chrysler Automobiles NV’s Italian Maserati brand.

Cadillac and Lincoln both lost ground in the market in 2017, while Audi, Jaguar and Land Rover gained market share. But there is no magic formula as the crowded luxury SUV market only accounts for a small sliver of the SUV segment. Mercedes and BMW — with lineups that heavily favor SUVs and crossovers — also lost market share in 2017.

“Both Lincoln and Cadillac will have the difficult task of generating real interest in a new vehicle in what has become a very crowded luxury SUV market,” Brauer said. “That’s the danger of being late to the game. What they need to do now is not just show new SUVs, but product that is dynamic and stands out.”

Lincoln achieved that last year with the Navigator, a show-stealer that’s still winning best-in-show awards and is credited with driving a $4,600 increase in average transaction prices for the brand. The Nav is going for an average $84,849 through the first two months of the year, according to Cox Automotive. For perspective, the Continental is the closest behind with an average price of $54,500.

“I often hear that Cadillac is a brand for retirees or old people,” Johan de Nysschen, Cadillac’s president, said at the Automotive News World Congress in January. “Of course it annoys the blazes out of me.”

Under de Nysschen, Cadillac has sought to reach a younger, more refined audience, distancing itself from GM’s mainstream brands when it opened a new headquarters in SoHo. Cadillac also offers the Tesla-fighter SuperCruise hands-free driving technology on the CT6.

At least some of this repositioning appears to be working: de Nysschen said at Automotive News World Congress that roughly 50 percent of Cadillac customers are now Gen X and Millennial buyers.

Lincoln, on the other hand, is in the middle of its second re-branding in 11 years. It is dropping its confusing alphanumeric vehicle names, a convention for European luxury companies, in favor of nautical names like the Nautilus, formerly the MKX, which debuted at the Los Angeles auto show in November.

Embracing Lincoln’s American identity could bode well for the brand overseas, the brand’s leaders and analysts say. The Chinese market in particular has shown an affinity for U.S. luxury brands. GM’s Cadillac and Buick brands had an especially good year in China in 2017, with Cadillac posting a 50.8 percent year-over-year sales increase with roughly 175,500 deliveries. Lincoln sold 54,124 vehicles in China in 2017, up 66 percent.

“U.S. automakers have spent and wasted far too much time and resources trying to imitate luxury European automakers,” Brauer said. “I think it’s good that Lincoln is going for a more traditional American look and feel. Domestic brands, particularly in China, could do well by doing more chest-beating to say ‘we are an American brand.’”