Texting and driving a minor ding with insurers

Texting and driving a minor ding with insurers 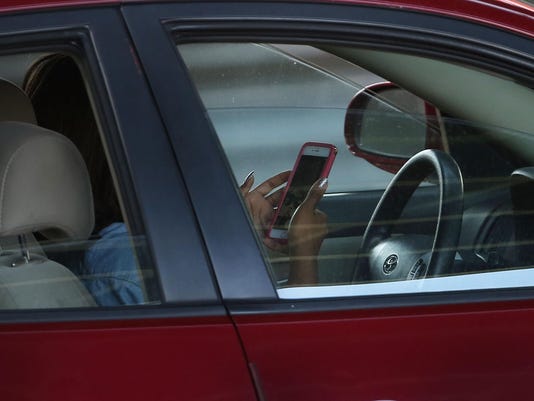 Crash report forms in many states don’t have boxes where an investigator can tick distraction as a factor.(Photo: Spencer Platt / Getty Images)

Insurance companies are finally putting a price on the risk of distracted driving, and it’s relatively cheap.

Last year, a ticket for using a mobile phone while driving added $226 to the average insurance policy, an increase of 16 percent, according to a new analysis from the Zebra, a Texas-based startup that helps consumers weigh insurance rates. That’s up from just $23 in the span of two years, but still a lot less than some other violations.

There are a range of relatively innocuous incidents and conditions that underwriters deem far more dangerous.

Driving too slowly, for instance, draws an average premium penalty of $345 a year, while passing a school bus will cost an extra $386 a year. Being old or being young is pricey too; 80-year-old drivers pay about 22 percent more than the average driver, while 18-year-olds (or their parents) have to fork over almost three times the national average for coverage.

“The distracted penalty was shocking to us,” said Alyssa Connolly, Zebra’s director of market insights. “It seems incredibly low, and I don’t think most people know you can even get a ticket for driving too slowly.”

Underwriters seem to be skeptical of safety technology as well. On average, U.S. auto insurers won’t reduce rates for vehicles that have blind-spot warnings, heads-up displays and systems to monitor driver alertness, according to the survey.

To be fair, raising insurance rates is a lengthy, bureaucratic process. The industry is regulated at the state level, so underwriters have to make their case for any risk reevaluation in every state where they sell policies. And those arguments are best made with supporting data, which has proven scant when it comes to distracted driving. Nobody, including federal safety regulators, has any decent idea yet how many people are using their phones at the wheel, and how many accidents that behavior precipitates. That said, traffic fatalities have spiked in sync with smartphone adoption.

But unlike being drunk, an ill-advised text is tough to spot from a police cruiser, and accident report forms in many states still don’t have boxes where an investigator can tag a crash catalyst as distraction.

“Underwriters don’t have the tools to measure the risk properly,” explained Phil Renaud, executive director at The Risk Institute, an Ohio University think tank. Renaud said he expects the industry to catch up quickly, primarily with embedded technology of its own.

“No one in the market is actually forcing them to change.”

The actuarial future will likely resemble Root Insurance Co., an Ohio-based startup that only insures drivers after they have downloaded an app that tracks their behavior at the wheel for a few weeks. Root, which operates in 16 states, said its policy-holders pay up to 52 percent less than average because it doesn’t let bad drivers sully its risk pool.

“The better driver you are, the better your rate will be,” it promises.

A few months ago, Root added mobile-phone use to its risk metrics, alongside speeding and hard-braking. It found roughly 80 percent of the people taking its “test drive” were texting or talking at the wheel, according to co-founder and CEO Alex Timm.

“We were very cautious and thought we’d just measure it and provide some feedback to customers,” Timm said. “But we found it’s incredibly correlated with accidents.”

Root quickly tuned its risk model to make distracted driving a bigger factor and, as it monitors its customers, it recently started sending surcharges to drivers who used their phones and discounts to those who didn’t. Timm, who rose through the ranks at Nationwide before starting Root, said a slowness to adapt among larger competitors is tied to a fear of losing customers.

“It’s hard for them when they find a new variable like this,” Timm explained. “And no one in the market is actually forcing them to change.”