Many left Tuesday's celebration at Michigan Central Depot realizing Ford's goal for the old train station extends beyond the building — cementing southeast Michigan as a leader in the future of transportation.

Detroit — Thousands came to celebrate Tuesday the planned revival of the moribund Michigan Central Depot. Many left realizing Ford Motor Co.'s goal for the old train station extends beyond the building — cementing southeast Michigan as a leader in the future of transportation.

Ford envisions a sweeping restoration of the building and parts of the surrounding Corktown neighborhood. The company wants to bring 5,000 employees there by 2022 to focus on developing the self-driving electric vehicles of Autos 2.0.

More: A celebration, not an implosion, at Michigan Central Depot

More: Bill Ford Jr.: 'We came together, Ford and Detroit'

Ford’s Corktown plan is tied to an uncertain future filled with autonomous vehicles and new ways of transportation. The ultimate goal is to ease traffic congestion and pollution in big cities. According to most industry experts, Ford trails crosstown rival General Motors Co. and Alphabet Inc.'s Waymo in its development of the self-driving car automakers hope will boost profits in the future.

But Ford's decision to bet on its future with an unprecedented plan for a neighborhood in its hometown — not in Silicon Valley or some other major city — is resonating with politicians, local business owners and the public, who have watched the station stand vacant and neglected for three decades.

"Ford's got it," said Harriet Sturkey, a life-long Detroit resident who pegged her age at "over 50." "It'll be OK now." 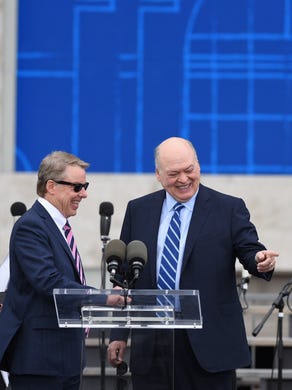 Ford Motor Co. Chairman Bill Ford Jr. and CEO Jim Hackett are all smiles as they prepare for their announcement on the main stage in front of the Michigan Central Train Depot on Tuesday, June 19, 2018. Max Ortiz, The Detroit News
Fullscreen

Ford Motor Company chairman Bill Ford Jr. speaks about Ford's investment in the former train station. “Ford’s investment in Corktown is anything but symbolic,” he said, adding that ⁦Ford⁩ intends the train station site to be for the 21st century what Ford’s Highland Park Plant was for the 20th. Max Ortiz, The Detroit News
Fullscreen

Martha Ford waves to a well-wisher before the program starts. Todd McInturf, The Detroit News
Fullscreen

A video screen projects a blueprint drawing behind Bill Ford Jr. as he makes his remarks. Todd McInturf, The Detroit News
Fullscreen

Ilitch Holdings, Inc. President and CEO Christopher Ilitch, left, is among those in attendance. Todd McInturf, The Detroit News
Fullscreen

Detroit Mayor Mike Duggan said the single best phone call he received as mayor was Dec. 24, 2017, when Matthew Moroun called to tell him of plans to sell the former train station to Ford. Max Ortiz, The Detroit News
Fullscreen 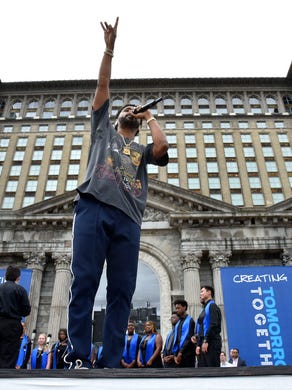 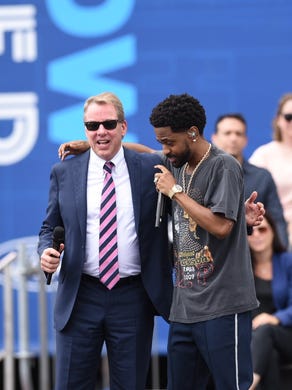 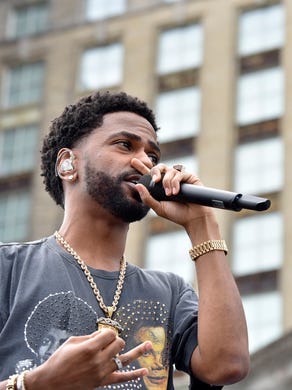 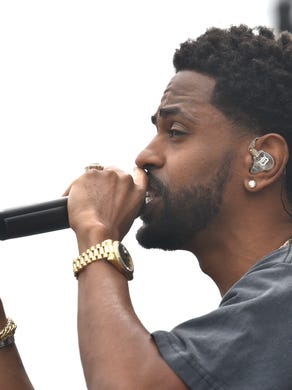 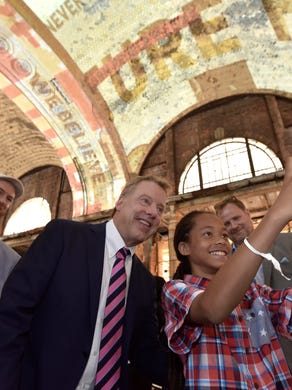 Daniel Scheibel, 37, of New York City is reflected in a round mirror inside the train depot. He works for Red Paper Heart, the company that installed insulation in the train depot. Todd McInturf, The Detroit News
Fullscreen

Michael Samhat, president of Crown Enterprises, the Moroun family real estate company that sold the train depot to the Ford Motor Co., shares a laugh with his daughter, Alliya Samhat, middle, and his wife, Nadiya Samhat, all of Grosse Pointe Shores, in the depot. Todd McInturf, The Detroit News
Fullscreen

The Blue Oval's plan would create a final node along a southeast Michigan circuit. Envisioned is a research and development corridor running along Michigan Avenue from Corktown, through Ford's Dearborn headquarters, to Detroit Metropolitan Airport and the American Center for Mobility at Willow Run, ending at the University of Michigan.

That could cement southeast Michigan as a destination for investment, workforce expansion and economic growth that could come from owning the creation and development of the next generation of automobiles.

“You can get people who are not that excited about Ford ... suddenly very excited, because now we are talking about more than building cars and trucks,” said Jerry Paffendorf, a Corktown resident and co-founder of Loveland Technologies, a property and mapping data firm in Detroit. “They really hinted about some type of high-speed transit along Michigan Avenue, and that is something that could spark huge enthusiasm."

The Corktown campus would be coupled with a planned overhaul of Ford's Dearborn campus. The company in 2016 set aside an undisclosed amount of money to fund what was estimated by some outside of Ford to be a sweeping $1 billion project. Ford CEO Jim Hackett stressed again Tuesday that the train station investment does not mean Ford is leaving Dearborn.

"Make sure you hear that," Hackett said. The Corktown campus is meant to supplement Ford's Dearborn redesign. "There's a lot of good work (in the Dearborn plan) that we're keeping. My commitment to Bill is to make the system (of the two campuses) work in a synergistic way."

The Corktown plan, he said, "guarantees the future of Dearborn."

Politicians and others said Tuesday that's a key point in propelling the effects of Ford's new Corktown campus. Connecting West Dearborn to Corktown would be a boon for the stretch of Michigan Avenue between the two locations. Along that route are long stretches of empty buildings; other parts are dotted by strip clubs. All of that could be revitalized.

"That's been my dream for a long time," Dearborn Mayor Jack O'Reilly said. "That's what I grew up with. That's the way we revitalize these communities."

The expected change for Corktown and southwest Detroit brings a mix of excitement and anxiety for many locals. Erin Galve operates Eldorado, a vintage goods store at the corner of Michigan and Cochrane, a few blocks from the train station.

“It’s a really exciting time for our neighborhood and city," Galve said. "One of the concerns for small businesses and residents is what does it mean as years go on.”

Galve’s store is in a building owned by someone who has already sold property to Ford in Corktown, but said her business is safe for now.

Some Detroit City Council members are urging Ford to make further investments within the city and agree to measures to keep rents affordable. The automaker should aim to invest $100 million locally, said District 3 Councilman Scott Benson.

“It may sound like a big number, but that number is a $1 billion project, " he said, though Ford hasn’t verified any estimate of what it will cost to overhaul the train depot and other Corktown properties. "I don’t think 10 percent of the total project cost is too much to ask and that’s a number that can be spread out over a number of decades."

District 6 City Councilwoman Raquel Castaneda-Lopez, who represents the city’s southwest side, urges inclusion and transparency in the planning process: “It’s about economic opportunity and making sure everybody has access."

Talk of Michigan Avenue and Corktown becoming a new Silicon Valley struck a chord with Brian and Stacy Mulloy, who moved to Corktown after working in Silicon Valley for 20 years. Brian Mulloy called the idea a “brilliant insight.”

He added:  “It could be a beautiful ecosystem of generalized designers and creatives. If you have a concentration in creative work move down to an urban center in Corktown, Ann Arbor brings the research, and Dearborn with the engineering, I really think it’s the right vision.”

The Mulloys, who run Ballet Real Estate, also understand it takes deep neighborhood involvement to create development the community wants. That’s why at 6 p.m. Tuesday, after the first-day crowd left the train station, the couple helped organize a gathering for local residents to digest and help ensure their voice is heard in this so-called new future that is taking its first steps.