Automakers are applauding President Donald Trump for signing a new U.S.-Korea Free Trade Agreement at a time when it appears their pleas related to other trade agreements have fallen on deaf ears in Washington. 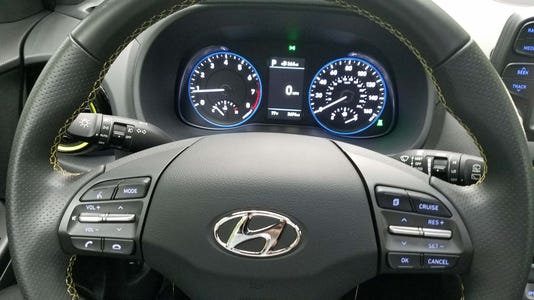 The 2018 Hyundai Kona. Under the revised U.S.-Korea Free Trade Agreement, the number of U.S. automobile exports that will be allowed to meet American car safety standards in lieu of Korean standards, and enter the Korean market without further modification, will be increased to 50,000 cars per manufacturer per year from 25,000 vehicles today.(Photo: Henry Payne, Detroit News)

Washington — Automakers are applauding President Donald Trump for signing a new U.S.-Korea Free Trade Agreement at a time when it appears their pleas related to other trade agreements have fallen on deaf ears in Washington.

The Trump administration has touted the new agreement with South Korea, known as KORUS, as fulfillment of a Trump campaign promise to renegotiate trade deals that he has derided as “unfair” to U.S. workers. The agreement comes at a delicate time for diplomatic relations with North and South Korea, with the latter trying to broker a deal on denuclearization between the U.S. and its northern counterpart.

It also comes as it appears increasingly unlikely that the Canada will not join the U.S. and Mexico in the Trump administration's proposed replacement for the North American Free Trade Agreement, dealing a blow to automakers' hope for trilateral deal in their backyard.

Under the revised U.S.-Korea Free Trade Agreement, the number of U.S. automobile exports that will be allowed to meet American car safety standards in lieu of Korean standards, and enter the Korean market without further modification, will be increased to 50,000 cars per manufacturer per year from 25,000 vehicles today.

The updated agreement will also delay until 2041 a phase out of the 25-percent U.S. tariff on trucks that was scheduled to happen in 2021, a boon to Detroit's profitable pickup truck business.

South Korea reduced its tariffs on U.S. autos to 4 percent from 8 percent under the previous version of the agreement, which took effect in 2012 under President Barack Obama, and the country was to eliminate them entirely in 2016. Obama administration officials said the trade agreement resulted in a 24-percent increase in sales of exports from the Detroit automakers in Korea by 2014.

The Trump administration has  argued that the trade deficit between the United States and Korea instead increased from $6.3 billion to $9.8 billion in 2017.

Detroit's manufacturers expressed optimism about the agreement, despite the fact that they are being vastly outstripped in exports by their Korean counterparts.

Ford said in a statement that it appreciates "the improvements that have been made to KORUS," but the company lamented the lack of protection against the Korean government manipulating its currency to ensure higher values for its car companies, which Detroit manufacturers have accused the country of repeatedly.

"As the leading U.S. exporter of vehicles, Ford strongly supports efforts to increase market access for our products around the world," the Dearborn company said. "It’s our understanding this agreement still does not include enforceable rules that prohibit currency manipulation, and we will continue working with the administration to meaningfully address this 21st century trade barrier."

GM added: "General Motors is encouraged by the United States and Korean governments’ continued work to advance U.S.-Korean relations through the signing of the amendments to the Korea-U.S. Free Trade Agreement. We are pleased with, and appreciate, the administration’s improvements to the agreement regarding non-tariff barriers."

FCA said: "We look forward to working with both the United States and South Korea to ensure the new provisions in the trade agreement are implemented in a way that secures additional access to the Korean auto market."

Matt Blunt, president of the American Automotive Policy Council, which lobbies for Ford, GM and FCA, said in a statement that South Korea "has historically been one of the most difficult markets for U.S.-built vehicles to gain access to due to non-tariff barriers.

"This is why we have welcomed the Trump Administration’s efforts to improve KORUS," said Blunt, a former governor of Missouri. "The modernized KORUS pact is an improvement to the original trade agreement, and we are hopeful it leads to meaningful progress in U.S. access to the Korean auto market.  We look forward to testing these changes to KORUS and hope strong and enforceable currency provisions can be addressed going forward."