Capturing Route 66 on film before it's gone

“66 on 66: A Photographer's Journey" captures the roadside attractions and neon-lit artifacts of U.S. Highway 66

Capturing Route 66 on film before it's gone

Terrence Moore hates freeways. But he loves driving backroads, and has spent his long career as a professional photographer documenting the kitschy, iconic American roadside attractions and neon-lit artifacts of what he calls the "mother road," the 2,000-mile stretch of U.S. Highway 66 built in the 1930s between Chicago and the Santa Monica pier in California. The 66 best images of his collection are being published next month in a 144-page book, “66 on 66: A Photographer's Journey."

Of course the images are from film, mostly Kodachrome transparencies. “I switched to digital late, didn't want to stop using film,” he says. The foreword of the book is from Michael Wallis, a Pulitzer- and National Book Award-nominated American history author.

As more motorists shun the increasingly congested interstates that replaced state highways like 66, Moore believes there could be renewed popularity with travel on backroads: “Obviously, all interesting backroads are and will be more popular because driving on the Interstate is like being in prison with no windows, just a ribbon of asphalt and semis on all sides. … Let’s not go there.”

Since developing a fascination for Highway 66 on family trips in the 1960s with his parents, he's driven its full length “only three times,” he admits. He's made hundreds of other trips on regional segments of the road in various cars more in style with the 1930s period of the road's birth, including a 1929 Ford panel truck, a ’29 Ford Tudor, a '29 Ford roadster, a ’32 Ford Victoria, a number of 356 Porsches, three ’57 Ford wagons, a 1941 Ford wagon  and a ’59 Cadillac — those are some of the cooler cars.

Moore says there really is no perfect car to drive on the remaining sections of Route 66: “Different vehicles create different experiences. The pre-1965 cars have character like the highway.”

Long sections of the 80-year-old Highway 66 have been abandoned, and replaced by freeways. Some have been deeded back to adjacent landowners. “There are sections, for example, the really old alignment from Santa Rosa, New Mexico, to Santa Fe is now not passable and goes through a ranch — that goes back to the early '30s, I believe. Reverse manifest destiny, it's an interesting concept … more to discover,” Moore says. 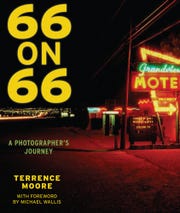 Moore has pblished his backroads images in Rolling Stone, Smithsonian and the New York Times Magazine, among others. He drove with the late New York Times writer Iver Peterson from Ocean City, Maryland, to San Francisco in 2010 in a 1958 Cadillac. The longest road trip was from Claremont, California, to Vancouver, British Columbia, then across Canada to Halifax, Nova Scotia, then down to New York City and back to Claremont for a total of 12,000 miles.

“I love old cars, but my latest 66 fantasy is to drive an electric car all the way," he said. "You know, plant trees and get the carbon footprint to a minimum and eat granola and drink organic, shade-grown Samaritan coffee.”

I like "66 On 66: A Photographer's Journey" because of the unretouched look of original images dating to the 1970s, which bring a realistic look at how Americans used to travel. And I can't wait for Moore to document his next road trip, possibly in an electric car, possibly reviving a new American dream of manifest destiny.