Washington — The National Transportation Safety Board's annual wish list for safety includes calls for automakers to make collision-avoidance systems standard on all models and for states to lower the legal alcohol limit for drivers and crack down on speeding. 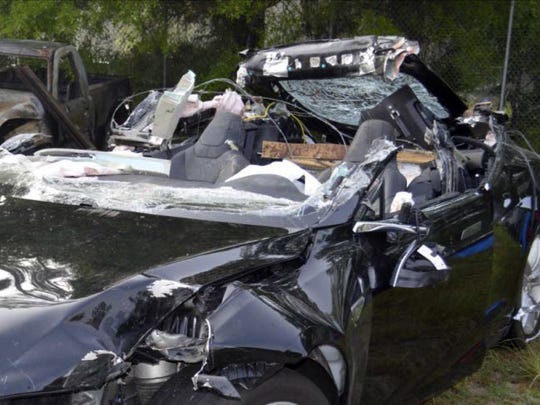 The Tesla Model S that was being driven by Joshau Brown, who was killed, when the sedan crashed while in self-driving mode on May 7, 2016. (Photo: NTSB via Florida Highway Patrol)

The agency released its annual "Most Wanted" list on Monday ahead of President Donald Trump's State of the Union address, featuring a host of measures it recommends that Congress and federal regulators take up immediately. The NTSB does not have the power to enforce the proposals themselves, and Congress routinely ignores the recommendations until a major accident compels them to act.

Among the pressing items on the NTSB's 2019 list is encouraging states to lower the legal blood alcohol content for driver to 0.05 percent or less. In Michigan, drivers with a 0.08 blood alcohol content can be charged with drunken driving. The agency said states should "broaden their use of other effective countermeasures, like ignition interlock devices and high-visibility enforcement."

Another major item on the NTSB's most wanted list is requiring automakers to make collision-avoidance technology standard on all models, and informing customers "about the technology’s capabilities and limitations." They agency also called for states to bolster efforts to eliminate distracted driving and crack down on speeding.

NTSB Chairman Robert Sumwalt said the wish list contains items that "can and should be implemented during the next two years.

"Each year, more than 10,000 people die in highway crashes, related to alcohol impairment," Sumwalt said in an event at the National Press Club in Washington. "That doesn't even include those related to drug impairment  Seriously? We must do better, and we can do better."

Of the call to bolster enforcement of anti-distracted driving regulations, Sumwalt said: "Anything that takes the driver's attention away from the driving task is dangerous. We love our personal electronic devices, we can't do without them. They're commonplace. And the distraction from these devices is commonplace. It must be addressed."

Other items on the NTSB's wish list include ensuring the safe shipment of hazardous materials and fully implementing an automated system for railroads known as Positive Train Control .

Sumwalt acknowledged that his agency does not have the power to compel states to comply with the recommendations.

Sumwalt pointed out that the NTSB's recommendations are based on data that is collected during their accident investigations.

"The NTSB does simply come up with these recommendations based on a whim," he said. "It's not the flavor of the day. It's a data-driven approach based on the results of our investigation and the tragic and senseless deaths that we investigate."