Toyota Motor Corp. President Akio Toyoda called on U.S. President Donald Trump to make a “careful and appropriate decision” on whether car imports to the U.S. are a national security threat, and potentially imp 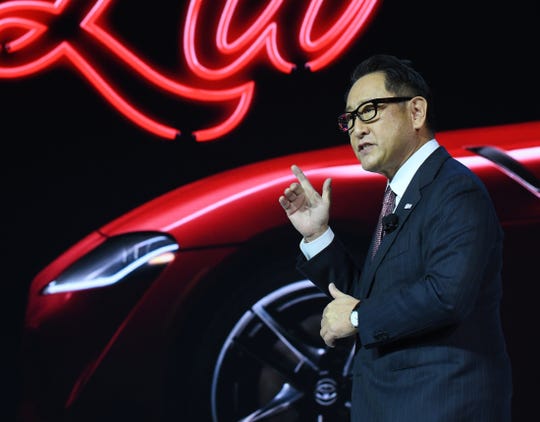 Toyota Motor Corp. President Akio Toyoda called on U.S. President Donald Trump to make a “careful and appropriate decision” on whether car imports to the U.S. are a national security threat, and potentially impose tariffs, to avoid potential ripple effects across the industry.

Speaking in his capacity as chairman of the Japan Automobile Manufacturers Association, Toyoda said imported vehicles aren’t a threat and warned import restrictions would affect manufacturers, dealerships and customers.

Negative effects on the U.S. economy and local jobs “should be avoided,” Toyoda said Thursday in a statement.

Trump, threatening levies of 25 percent, on Sunday received the findings of a probe into whether imported vehicles posed a national security threat, the basis for imposing sanctions.

He now has 90 days to decide whether to act on the findings, which haven’t been published.

Companies and governments from Europe to Asia have warned Trump that tariffs would hurt the U.S. economy and disrupt the global auto industry.

Commerce Secretary Wilbur Ross started the investigation in May under Section 232 of the Trade Expansion Act, the same provision the administration used last year to slap tariffs on steel and aluminum. The car probe covers imports of vehicles including sport utility vehicles, vans and light trucks, as well as auto parts.

Higher U.S. tariffs and retaliatory actions could jeopardize about $500 billion of trade flows, accounting for 2.8 percent of 2017 global imports, Moody’s Investors Service Ltd said this week. “The economic fallout would be significant, with auto tariffs hurting the global economy by distorting prices and creating inefficiencies,” it said.