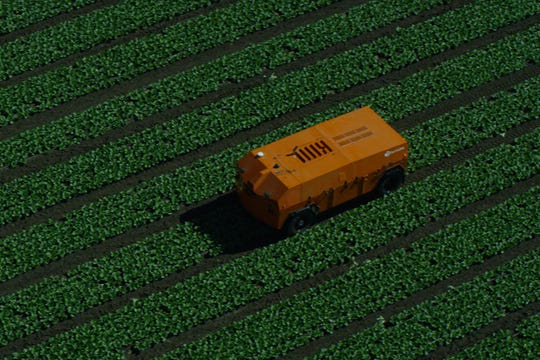 The contract between San Francisco-based FarmWise and Roush includes the building of a dozen self-driving robots in 2019 with additional units in 2020. The agreement's details were not provided.

"Our strategy has been to continue to look for opportunities to take our product development and commercialization abilities we've developed over 42 years from the automotive industry and look for other verticals we can participate in," Roush CEO Evan Lyall said. "The agriculture space presents lots of opportunity."

The company has worked in powertrain development for agriculture companies in the past. This is its first foray into self-driving machines for farms.

FarmWise and its team of 20 farming and artificial intelligence experts are joining a number of companies seeking to leverage technological advances to make crop production more efficient.

But the company is looking to scale up quickly, which is why it turned to Michigan, said Pauline Canteneur, FarmWise business strategy analyst.

"Historically, there's so much knowledge with the automotive industry," she said, "and there is a concentration of very high-skilled engineers, people who design for manufacturing."

The weeder uses two blades that form a V shape. They dig into the ground between the crops to push the weeds away and "de-root" them, Canteneur said. The robot leaves behind the pulled weed.

The machine seeks to save costs on labor, increase yield and replace herbicides. The robots can work 24/7 and adapt to different crops.

Herbicides can vaporize and spread to neighboring fields, harming plants that aren’t modified to withstand them. More than a million acres of soybeans were damaged last year, and the chemicals were a focus of lawsuits.

FarmWise provides its service for a fee per acre. It hopes to launch a small batch this summer. Although that won't include any Michigan farms yet, Canteneur said the company likely will test its robots on vegetable farms in the state.

The companies were introduced through the Michigan Economic Development Corp.'s mobility and technology arm PlanetM.

"This is a great expansion for Roush," Lyall said, "and it's exciting that it is happening in the state of Michigan."