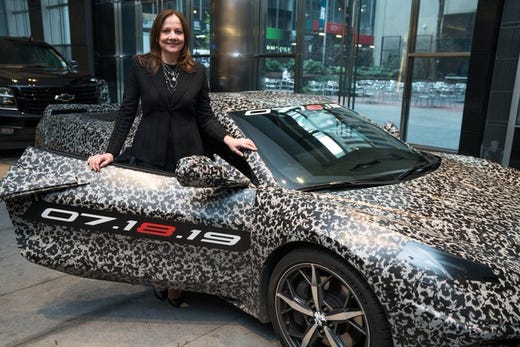 General Motors Chairman and CEO Mary Barra and a camouflaged next generation Chevrolet Corvette Thursday, April 11, 2019 in New York, New York. The next generation Corvette will be unveiled on July 18. Photo by Todd Plitt for Chevrolet
Fullscreen 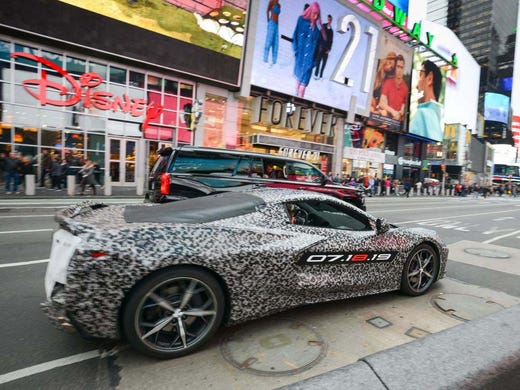 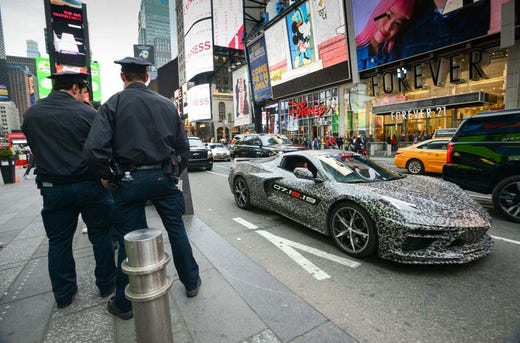 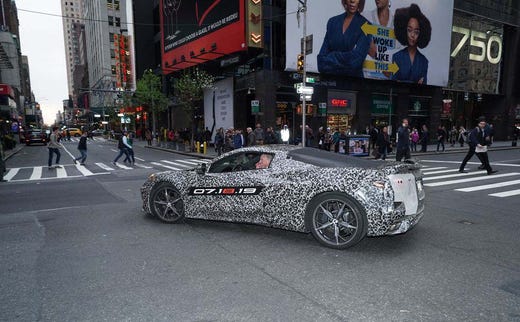 GM is adding a second shift at its assembly plant in Bowling Green, Kentucky, to support production of the new mid-engine Chevrolet Corvette, which made an appearance in camouflage earlier this month in New York. GM
Fullscreen 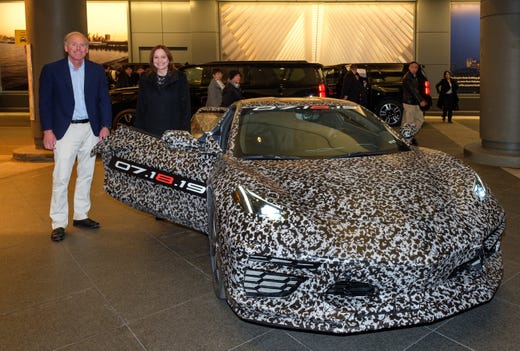 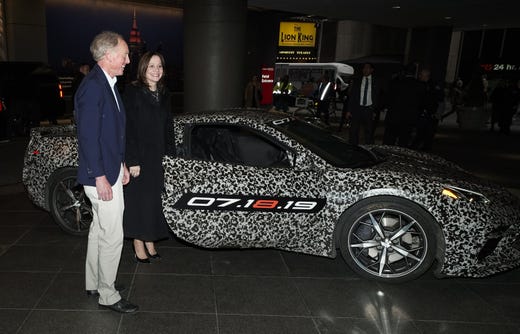 The next generation Corvette will be unveiled on July 18. Todd Plitt for Chevrolet
Fullscreen 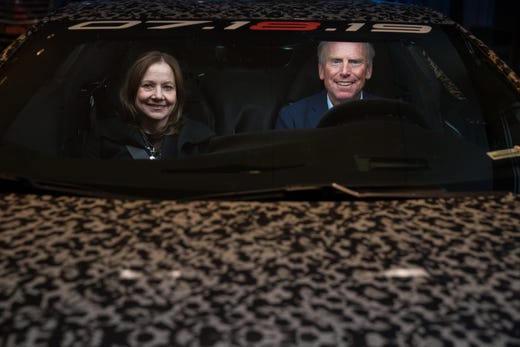 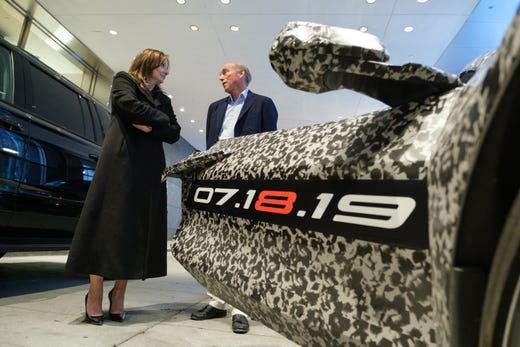 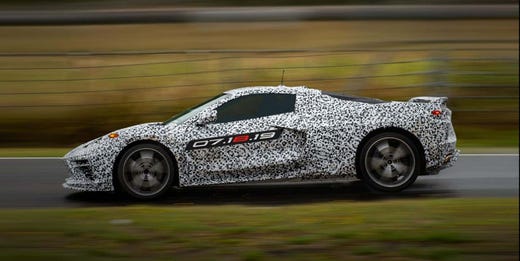 The long-awaited Chevrolet C8 is the first production 'Vette with the engine behind the driver. Chevrolet, Chevrolet
Fullscreen 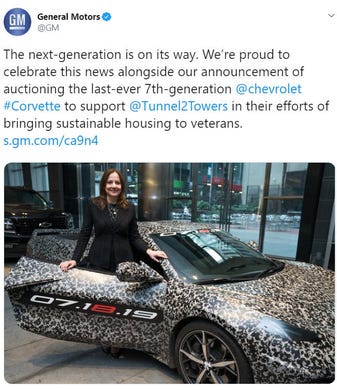 General Motors revealed the fabled mid-engine Corvette with a drive to the New York Auto Show and a tweet. Twitter
Fullscreen 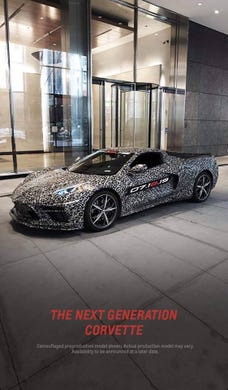 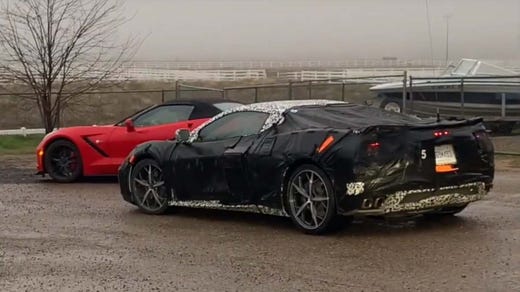 The worst-kept secret in autodom is out.

The veil was lifted Thursday night when General Motors Co. confirmed the existence of its long-rumored mid-engine Corvette by driving it through the most public place on the planet — Times Square, New York.

With Corvette Chief Engineer Tadge Juechter behind the wheel and GM CEO Mary Barra riding shotgun, the thinly-camouflaged C8 stopped traffic at 7th Avenue & Broadway on the way to the Marriott Marquis Hotel where Barra publicly confirmed the next-generation Corvette.

The mid-engine supercar will officially break cover, sans camou, on July 18 at a yet-to-be-disclosed event.

The first production Corvette to sport an engine mounted behind the driver, the new, so-called C8  'Vette (for eighth generation) will debut with the legendary Stingray badge and around 500-horsepower from a push-rod V-8 engine. More engine variations are expected including a twin-turbo V-8 and even a hybrid version with an electric motor up front producing over 1,000 horsepower.

The C8's Times Square debut was carefully choreographed to take place in the middle of New York rush hour — from 5.50-6.05 PM — and deliver Barra to the annual Footsteps to the Future Gala put on by the Stephen Siller Tunnel to Towers Foundation. The foundation honors New York fireman Siller, who died in the 9/11 attacks on the World Trade Center.

Juechter and Barra piloted the supercar (its 07.18.19 launch date emblazoned on the side) out of a Barclays Bank garage where it had been secreted Thursday. Accompanied by four giant, black Chevy Suburbans — and one of New York's finest on a police bicycle — the Corvette motorcade then made its way down 7th Avenue south of 47th Street and the giant Times Square grandstand where TV stations broadcast the New Year's ball drop.

GM had video and still cameras in place — including high in a Times Square building — to record the C8's quick jaunt.

A bystander says Juechter behaved himself, resisting the temptation to rev the C8's big engine for the throngs of people cramming the curbs to get a peak of the camouflaged creature.

After cruising past the Disney Store, Broadway, and a forest of neon billboards, Juechter hung a right at 45th Street (past the Minnskoff Theater where the Lion King is playing) and delivered Barra and the C8 to the Marriott's front entrance.

A blizzard of Internet media followed.

While Barra addressed the gala, GM posted a not-so-cryptic notice on GM's website. The company posted to customers: "Don't get left behind. The Next Generation Corvette is the most anticipated Corvette ever. . . . Sign up to receive updates straight from the source and be the first to know about the Next Gen Corvette. "

The post was followed by GM social media posts and video of the mid-engine Corvette taking the city by storm. The icing on the cake came from GM motorhead and President Mark Reuss — long a champion of the Corvette program — who posted pictures of the C8 on his Facebook page.

Rumors of a mid-engine Corvette have been around for years as the current car pushed the boundaries of front-engine performance — and competitors like Ford and Acura moved to mid-engine platforms. The Detroit News first confirmed the existence of the mid-engine car in August of 2016, and spy photographers have taken multiple shots of the car testing on race tracks and roadways around the U.S.

When the car missed its expected debut at the Detroit Auto Show this January, reports surfaced of program delays caused by electrical gremlins as well as chassis-twisting issues. When Reuss was photographed riding in a thinly-disguised, mid-engine Corvette in Arizona this winter, speculation as to when the car would debut reached fever pitch.

The program is under deadline pressures beyond a rabid fan base waiting to buy it. The C8 brings significant advantages on the race track — the current front-engine race car is getting long in the tooth against mid-engine competitors from Ford and Ferrari —  and Chevy is expected to debut the car for the 2020 IMSA Weathertech racing season at next January's Rolex 24 Hours of Daytona. The racing version of the C8 must be licensed for competition by the end of this year.

Sales of the front-engine C7 have also fallen off a cliff as customers anticipate the arrival of the next-gen car. Sources expect the C8 will be priced a few thousand dollars more than the current gen.

Along with breaking GM's silence on the C8, Barra announced at the Marriott charity gala that the final front-engine C7 (a black, 650-horse Z06 model) will be auctioned at Barrett-Jackson in Connecticut on June 28 — and all proceeds would go to the Stephen Siller Tunnel to Towers Foundation.

“GM, GMC and Chevrolet support the Stephen Siller Tunnel to Towers Foundation and its commitment to injured and fallen military members, first responders and their families,” said Barra. “The sale of this iconic Corvette will help the foundation continue its good work, and pave the way for the next-generation Corvette that we will introduce on July 18.” 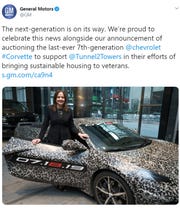 General Motors revealed the fabled mid-engine Corvette with a drive to the New York Auto Show and a tweet. (Photo: Twitter)