'He was a giant': Friends, families of Chrysler workers remember Lee Iacocca

A steady stream of guests entered Lynch Sons Funeral Home in Clawson during a public viewing Tuesday to remember the man who saved Chrysler Corp.

'He was a giant': Friends, families of Chrysler workers remember Lee Iacocca 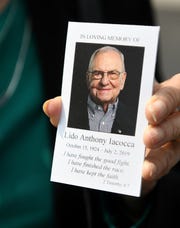 The memory card for Lee Iacocca is displayed by a mourner outside Lynch & Sons Funeral Home in Clawson where visiting hours were held Tuesday. (Photo: Robin Buckson, The Detroit News)

Clawson — Automotive leaders, family of Chrysler employees and a former governor joined the family of Lee Iacocca on Tuesday as they mourned the death of the famed CEO known for his sales pitches and the success of the Ford Mustang and Chrysler minivan.

A steady stream of guests entered Lynch Sons Funeral Home in Clawson during a public viewing to remember the man who saved Chrysler Corp. in 1980. He died July 2 at age 94 from complications with Parkinson's disease.

"He was the right man at the right time in the right place," former Michigan Gov. Jim Blanchard said. "He was not just a businessman. He was a master politician. He was a social philosopher."

Blanchard worked with Iacocca for a dozen years. Blanchard was the principal sponsor of the deal to loan Chrysler $1.5 billion in 1980 while he served in Congress.

Former Gov. Jim Blanchard on the life of Lee Iacocca The Detroit News

"He testified before Congress, and he was brilliant," Blanchard said. "The deal was popular in Michigan, but not everywhere else. We need more leaders like him."

The jobs saved by that agreement are what the sons and daughters of former Chrysler employees said is the legacy Iacocca leaves behind.

"He saved my father's job, the jobs of people who worked hard all the time," Gracie Passalacqua, 59, of Warren said while walking to her Chrysler 300. Her father, Sam, worked with United Auto Workers Local 212. "He was a legend. I'm proud of the work he did for Chrysler."

Lido Anthony Iacocca is the only auto executive to have led two of the Detroit Three automakers. He joined Ford Motor Co. in 1946 and quickly climbed the ranks. By 1970, he was president of the Dearborn automaker, but Chairman Henry Ford II later fired him.

Chrysler then hired Iacocca, and he became its CEO in 1978. He often is credited with helping to turn around the company in just a few years. Iacocca stepped down in 1993.

Bob Lutz, former Chrysler president, credited Iacocca with the "revitalization of the automotive industry" in Michigan. 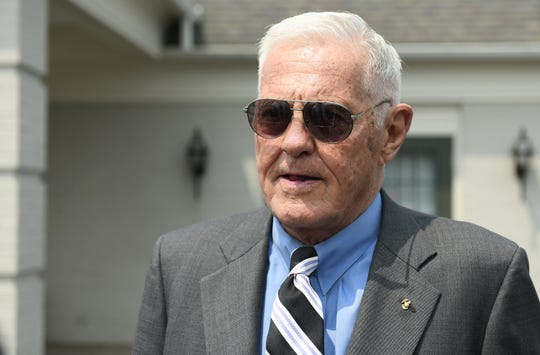 He also saw what many others couldn't, Lutz said, noting Iacocca's greatest achievement was the acquisition of American Motors Corp. in 1987.

"I think it transformed Chrysler forever," Lutz said. "Everybody was against it, including myself ... but we got the Jeep brand. ... It's one of the most respected brands in the world."

A funeral will be held at 11 a.m. Wednesday in the stone chapel at St. Hugo of the Hills Church in Bloomfield Hills. His body will be buried with his first wife, the former Mary Kathryn McCleary, who died in 1983, in White Chapel Cemetery in Troy.

The man's work was personal for people like Ronald Schneider, 76, of Warren who worked for Chrysler for nearly 44 years as a line worker and then a repairman.

"I got to shake his hand when he came to the plant," recalled Schneider, who worked in the Jefferson Avenue Assembly and Jefferson North Assembly plants in Detroit. "Now I have to say goodbye. He was like an uncle to me. He cared about people. He saved our pensions and our jobs."

Timothy Murphy has similar feelings; his father was a tool-and-die maker for Chrysler's Plymouth brand.

"He was the breadwinner," Murphy said. "I'm the youngest of five. Chrysler saved my father's job thanks to Lee Iacocca."

Despite the presence he projected as one of the first CEOs to appear in commercials for his company, those who knew him said he didn't act it.

"He never had his nose up," Dino Mitropoulos, Iacocca's longtime tailor in Birmingham, said as he pulled out a photo of the two of them from his breast pocket. "He knew what he wanted. I made him look like a movie star."

For many, that movie-star image is what they will remember.

"I remember watching him on the news all the time," said Rosemarie Portano of Troy. "He seemed to be down-to-earth, just a top-notch guy. He was a giant."