The number of fatalities on U.S. highways declined 2.4% in 2018, according to data released Tuesday by the National Highway Traffic Safety Administration. 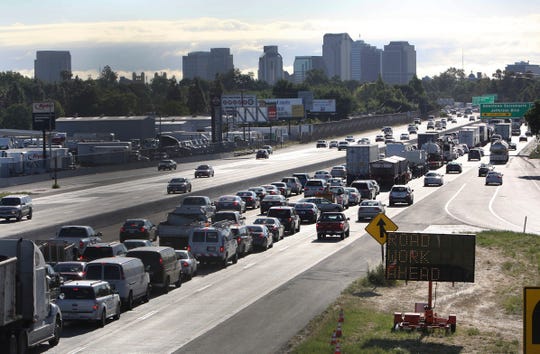 The Trump administration's environmental battle with California is intensifying, with the Environmental Protection Agency warning the state that it could lose some forms of federal funding for going it alone with setting emissions standards. (Photo: Rich Pedroncelli, AP)

Washington — The number of fatalities on U.S. highways declined 2.4% in 2018, according to data released Tuesday by the National Highway Traffic Safety Administration.

Michigan had 974 highway fatalities in 2018, down from 1,031 in 2017. Of the 974 Michigan deaths, 267, or 27%, involved an alcohol-impaired driver. The number of alcohol-impaired driver deaths in 2018 was down from 305 in 2017. Michigan ranked ninth in deadly highway fatalities, behind California, Texas, Florida, Georgia, North Carolina, Ohio, Pennsylvania and Illinois.

"After worrying spikes of fatalities in 2015 and 2016, we're heading in the right direction," Acting NHTSA Administrator James Owens said on a conference call in Washington. "Our preliminary estimate for the first half of 2019 shows that the trend may be continuing into this year as well, with fatalities that are 3.4% below that of the same period in 2018."

Despite being buoyed by the fatality reduction, Owens said the Transportation Department still has "a lot of work to do" to continue to make U.S. roads safer.

"While this is great news, there's still a sobering number of lives lost on our roads," he said. "...Every person lost leaves behind families and friends who will never be the same."

Owens said there is no single reason for the overall decline to be attributed to.

"Many factors attributed to this decrease, including effective safety programs," he said. "We do know that many fatal crashes involve dangerous behaviors such as speeding, driving while impaired by drugs or alcohol, failing to wear seatbelts, driving while distracted and riding a motorcycle without a helmet."

He added: "We also know that thanks in large measure to NHTSA's efforts, new vehicles today are safer than ever when crashes occur, and more and more of them are equipped with advanced safety technologies that can prevent or reduce the severity of crashes in the first place. Unfortunately our fleet today is the oldest in history. The average car on our roads is nearly 12 years old."

Highway safety advocates cheered the news of the reduced number of roadway deaths.

"We are pleased to see a 2.4 percent drop in fatalities in 2018 and an estimated 3.4 percent dip in early 2019," Jonathan Adkins, executive director of the Governors Highway Safety Association, which represents the state highway safety offices, said in a statement. "A decline in 2019 would mark three straight years of fewer fatalities despite a strong economy, which typically correlates with increased traffic deaths. However, the only acceptable level of deaths is zero, and we will not rest until that is achieved."