Washington — President Donald Trump claimed Friday his proposal to roll back stringent gas-mileage rules enacted by the Obama administration will reduce the price of a new car by $3,500. But there is little evidence to back up that claim, and consumer groups say motorists could save more than that in reduced fuel costs and vehicle maintenance if current rules are left in place. 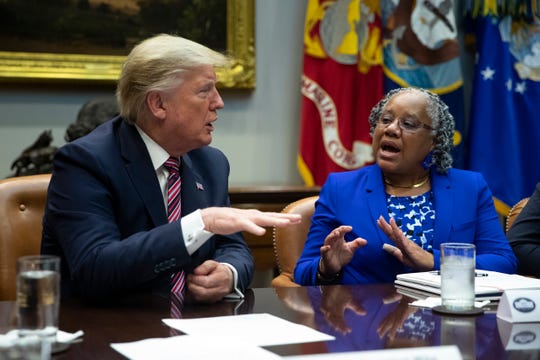 “We're in a dispute with California. California, in order to save a tiny amount of fuel, of which we have plenty, we have numbers that nobody ever would have believed possible," Trump said during a roundtable event at the White House intended to highlight his administration's effort to reduce the regulations deemed burdensome to U.S. companies.

"We can make cars much less expensive, much better, much stronger, and about the same from an environmental standpoint," he continued. "Very close."

Trump has proposed a freeze that would lock in fuel-economy rates at 2020 levels, when carmakers would be required to produce fleets that average about 39 miles per gallon. That freeze would last until 2026. He also sought to revoke California's right to set its own emission rules for cars, which has triggered a legal fight.

Car prices indeed have climbed since 2012, when Barack Obama's White House finalized rules that would have required automakers to achieve fleetwide averages of more than 50 miles per gallon by 2025. But most experts say those price increases can be attributed to the inclusion of new technologies such as infotainment systems and safety features — and because buyers are opting for bigger, more luxurious cars and trucks.

The U.S. Environmental Protection Agency and National Highway Traffic Safety Administration estimated in 2018 that keeping the Obama-era mileage rules in place would add $2,340 to the cost of owning a new car, based on estimated savings of $1,850 in average costs related to technologies that would be required to meet higher mpg rules and $490 in savings on ownership costs for financing, insurance and taxes. The figures are a measure of ownership costs and not sticker price.

The Obama administration's analysis quickly added that the projected increase would be more than offset by lifetime fuel savings of $7,000 to $10,000.

"The White House keeps saying strong fuel-economy standards hurt consumers even though that's been debunked countless times," said Shannon Baker-Branstetter, policy counsel on energy and environment for the advocacy division of Consumer Reports. "Fuel economy technology is an attribute that pays for itself and is a terrific value for consumers."

Trump brushed off the decision by Ford Motor Co., BMW, Volkswagen and Honda to side with California, focusing instead on the public support for his position from General Motors Co., Fiat Chrysler Automobiles and other automakers.

"We have some good support among auto companies," he said. "The only ones that don’t support it are car companies that want to be politically correct."